One of the most interesting features of evolution is coevolution -- where two unrelated species influence each other's evolutionary pathway.

It's usually framed as benevolent, providing a benefit for both species, as in the whistling thorn (Vachellia drepandolobium) of East Africa, which makes hollow spheres at the base of the spines.  These provide a home for various species of symbiotic ants, which help out the tree by attacking and killing insect pests that might eat the leaves.  (It's called "whistling thorn" because the wind blowing across the holes in the spheres makes a whistling noise.)

There's also the less pleasant sort, the best-known of which is the evolutionary arms race -- such as the cheetah and the impala.  The fastest cheetahs catch and eat the slowest impalas, thus pushing both species to (on average) get faster.  (The general consensus, though, is that the cheetah might have topped out in terms of potential speed -- the combination of their powerful muscles and flexible spine and limbs would make them prone to dislocations and stress fractures if they were driven much harder.)

A relationship that's usually portrayed as entirely positive, though, is the one between flowering plants and their pollinators.  One of the earliest vindications of Darwin's theory of natural selection came with his conjecture that the Star of Bethlehem orchid (Angraecum sesquipedale) of Madagascar, which has a ridiculously long hollow spur at the back of the flower (with the nectar glands all the way at the tip), must have a pollinator with mouthparts that fit it: 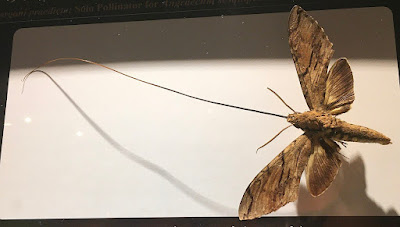 In fact, the coevolution between flowering plants and insects is so varied and complex that some evolutionary biologists claim it's responsible for the explosion in biodiversity in both groups that started during the early Cretaceous Period.  This, they say, is why flowering plants outnumber all other plant species by a considerable margin, and insect species outnumber all the rest of Earth's species put together.  (My own opinion is that it's probably not that simple -- evolutionary drivers seldom are.  But I won't deny that coevolution played a significant role.)

What's kind of interesting, in a grim sort of way, is when the coevolution between plants and their pollinators takes a darker turn.  One example, that is so crazily complicated that I had students tell me I was making the whole thing up, is the bucket orchid (Coryanthes spp.) of South America.  These bizarre-looking flowers have some upright petals, but the lower ones are fused into a "bucket" that fills with sweet-scented nectar.  The pistil (the female part of the flower) is submerged at the bottom.  One genus of bees (Euglossa spp.) is attracted to the scent, but upon landing on the edge of the bucket, finds no place to hang onto and falls in.  It swims around trying to find a way out, but the sides of the bucket are coated with a slick wax that provides no traction.  There's only one place it can get out -- at the back of the bucket is a ladder (I shit you not) made of hairs the bee can hang onto.  But when it gets to the top of the ladder, it finds itself head-first in a long tube with no place to turn around, so it wriggles its way to the end -- in the process gluing the anthers (the male pollen-bearing structures) to its back.  At the end of the tube is a hole (whew), and the bee flies away.  But then -- not having learned its lesson, apparently -- it finds another flower, falls in again, and this time the nectar acts as a solvent.  The anthers it was carrying come loose and settle to the bottom of the bucket (remember, that's where the pistil is), and pollinates the plant. 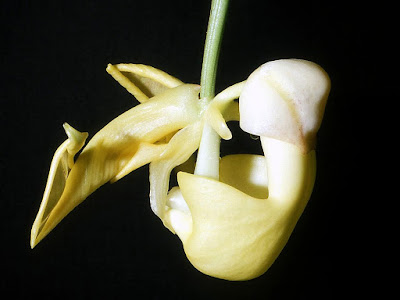 But at least here, it has a happy ending -- the bee escapes eventually.  There are, however, plants that kill their own pollinators -- in fact, that's the reason this whole topic comes up, because another one was just discovered recently.

The first one I ever heard about that pulls this nasty trick is a species of African water lily (Nymphaea capensis).  It's deceptively beautiful: 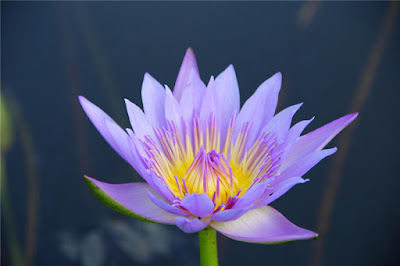 The flowers open twice, on two successive days.  The first day, the pistils are inaccessible beneath a tight cone of stamens (the above photograph was taken on the first day).  Bees landing on the flower are doomed to disappointment, because the nectar is inside the cone, but in trying to get to it they coat themselves with pollen.  The flowers close at night, then when they open on the second day, the cone of stamens opens as well, exposing a tempting pool of nectar with (once again) the pistil at the bottom.  A bee, having just visited a first-day flower and come away with no food but lots of pollen, lands on the edge of the pool in the middle of a second-day flower, and falls in.  This time, though, there's no escape.  It drowns, and the pollen it's carrying settles to the bottom of the pool and fertilizes the flower -- thus ensuring the plant will cross-pollinate, not self-pollinate.

What brought this topic to mind was a paper I stumbled across yesterday in the journal Plants, People, Planet that describes the same sort of fatal deception, but using a different kind of lure.  A Japanese species of the genus Arisaema, which in the United States is best known for the spring wildflower we call Jack-in the-pulpit (Arisaema triphyllum), that is common here in the northeast.  They have bizarre flowers -- a long, inverted cone with a flap on top (it's actually a spathe, a modified leaf), and in the middle a narrow cylinder (containing the actual flowers themselves, which are tiny).  If they're not weird enough from appearance alone, wait till you hear what some of the Japanese species do.

Arisaema angustatum (left) and Arisaema peninsulae (right), two of the tricksters described in the paper [Photograph by Kenji Suetsugu]

These flowers are pollinated by fungus gnats -- familiar as annoyances to anyone who owns a greenhouse -- pinhead-sized flies that are attracted to moist soil.  Well, the plants don't just lure them by pretending to be a source of food.  The researcher, Kenji Suetsugu of Kobe University, realized something else was going on when he found that inside the cone-shaped spathe there were dozens of dead fungus gnats...

Suetsugu started analyzing what chemicals the flowers were producing, and found that like the water lily, the Arisaema flowers change during the time they're open.  At first, only the male flowers are open, and fungus gnats that find their way in (presumably lured by the musty smell the plant has) climb about and pick up pollen.  But then the male flowers close and the female ones open -- and the strategy changes.

When the male flowers only are open, there's a little escape hatch at the base of the flower, so the gnats can get out after picking up pollen.  But when the female flowers open, the escape hatch closes.  And that's when the plants start producing a new chemical: an analog to the sexual attractant pheromone female fungus gnats produce to attract the males.

So the poor male gnats, hoping to get laid, find their way into the flower, but there's no way out because (again like the water lily) the interior of the cone is slippery.  They climb around on the female flowers, pollinating them, but eventually die from a combination of exhaustion and frustrated horniness.

If you thought that the relationship between flowers and pollinators was all mutual happiness, think again.  "Nature is red in tooth and claw," as Alfred, Lord Tennyson put it.  He was thinking of predators and prey, but it isn't restricted to the animal kingdom.  There are plants that reward their pollinators with an unpleasant demise -- showing that once again, evolution finds a way to exploit just about every possible innovation you can think of, nice or not.