A former student of mine (and current friend) is a veterinarian in Scotland.  Being committed to a scientific approach to health, she frequently weighs in on Skeptophilia posts regarding medical issues of all kinds.

Saturday's post, about the highly dubious alternative-medical claims of a woman named Christina Lopes, prompted her to mention (after she basically gave me a round of applause for calling out Lopes's bullshit) that it's not just in human health that the alternative medicine specter raises its ugly head.  She is understandably frustrated with pet owners who think their home remedies and ten-minute "research" on Google supersedes her DVM and years in practice, and -- just as with Lopes -- frequently want to avoid the expense and pain of an actual effective treatment for what amounts to waving a magic wand and shouting "accio health."

She followed this up by sending me a website claiming to have discovered a new approach to the scourge of dog owners all over: ticks.  Not only are these repulsive little arachnids unpleasant in and of themselves, they carry a number of serious diseases -- most notably Lyme disease, but also Rocky Mountain spotted fever, babesiosis, ehrlichiosis, anaplasmosis, and Powassan virus.  (As an aside, in the southeastern United States, the bite of the lone-star tick can have another dreadful result -- alpha-gal syndrome, the main characteristic of which is a life-threatening anaphylactic allergy to consuming red meat.) 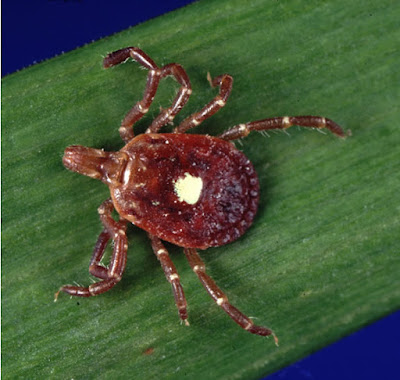 So it's natural enough for pet owners -- well, anyone who spends time outdoors, actually -- to want a good tick repellant.  The problem is, not much repels them.  Some of the chemical-infused tick collars contain compounds that can harm humans, so while they're probably the best option, I can understand people's reluctance to use them.  We've had decent success with tucking cardboard tubes containing cotton balls soaked with permethrin solution in out-of-the-way parts of our property, the idea being that one of the main tick carriers in our area -- deer mice -- will pull bits of the cotton to make their nests, killing any ticks they happen to be carrying.  We've noticed a significant decrease in ticks in our yard -- last summer we barely saw any -- so our admittedly anecdotal and small-sample-size experiment appears to work fairly well.

But it does take some effort, and handling a Scary Chemical (although it must be said that a thorough analysis by the FDA has found permethrin to be completely safe for humans when used properly, and the World Health Organization includes it on their List of Essential Medicines).  So people who gravitate toward "natural" solutions tend to cast about for other ways to take care of the problem.

It's this impulse that resulted in the British pet supply company Harbour Hounds to market a new approach.  They call it the "EM Tick-Off Necklace."  On their website they remind us repeatedly that all of their names and products are registered and/or trademarked, but I'll hope one mention will fly under the radar, especially since I'm not selling anything and have no plans to swipe their idea.

You'll see why in a moment.

"EM" stands for "Effective Microorganisms."  What they apparently are claiming is that the reason ticks flourish is because the soil microbiome is off, so if you encourage the right kinds of microbes, the problem goes away.  The upshot is what they do is to take three species of beneficial microorganisms (a yeast, a photosynthetic bacterium, and a lactic-acid fermenting bacterium), and incorporate them into some clay beads, then string the beads to make a necklace for your dog.

"How," you may be asking, "does encasing the microbes in clay beads and hanging them around your dog's neck help the soil microbiome?", you may be asking.  I know that's what I was asking, by this point.

Well, it's one step beyond even that.  After mixing the yeast and bacteria in the clay and making it into beads, they "bake it at high temperatures to capture the DNA" of the microbes.

Unfortunately for Harbour Hounds, I'm an amateur potter, and I know something about baking clay.  When I'm making a piece of pottery, the lowest temperature necessary to harden the clay into ceramic is what potters call "cone 06" -- just this side of 1,000 C.  (My wife and I, and a lot of potters, actually go higher than that, to "cone 04," which is around 1,060 C.)  And I've seen what these temperatures do to organic matter.  A while back I was loading our kiln and found that there was a dead fly in a rather hard-to-reach spot on the kiln shelf, so I just shrugged my shoulders and left it.  After firing and cooling, I opened the kiln, and what had been a dead fly was now a tiny pile of completely calcined white ash.

Also unfortunately for Harbour Hounds, I spent thirty-two years teaching biology, so I know something about DNA as well, including the awkward fact that when heated, DNA denatures (breaks down) -- it completely degrades at 190 C, over five times lower than the minimum temperature it takes to fuse clay into ceramic.  So not only would the microbes themselves be gone after firing, so would every last trace of their DNA.

Nevertheless, Harbour Hounds claims that it's still in there, and furthermore, that the DNA in the ceramic emits far-infrared light.  These wavelengths, they say, are "non-evasive," whatever the hell that means.  But apparently they also repel ticks.

And this brings up the third unfortunate thing for Harbour Hounds, which is that I have a bachelor's degree in physics, so I am aware that any object above room temperature emits infrared light.  In fact, you emit infrared light -- that's why you can be seen at night through infrared goggles -- yet the ticks, mosquitoes, and other unpleasant little bastards can find you just fine.

So this claim seems to be batting zero, here.  However, they cover their own asses by two disclaimers: (1) the collars aren't guaranteed to prevent ticks completely, so you should always check your dog thoroughly and pull off ticks when you find them; and (2) you and your dog should avoid walking in areas where there are lots of ticks.

To sum the claim up, then: "send us lots of money for tick collars that do absolutely nothing, making sure to replace them every year, and then do exactly what you were doing before."

Anyhow, thanks to my friend for the lead on this story.  Me, I'm gonna keep using cotton with permethrin and (a little hesitantly, I must admit) standard tick collars for our pups.  It's not a perfect solution, but at least I know it has a better success rate than what Harbour Hounds is claiming.