Today I'm going to continue on my exploration of weird physics, which has happened not only because I find it fascinating but because I keep finding new research that blows my mind.

It's what I love about science in general, really.  This won't be any shock to regular readers of Skeptophilia -- I'm always seeming to bump into just-published papers on crazy cool topics, especially having to do with astronomy, biology, physics, geology, and paleontology, and then telling you about them here.  As I've said before, delve into science if you want to guarantee you'll never be bored again.

Today's topic came to me via a paper in Physical Review Letters by Barbara Šoda and Achim Kempf (of the University of Waterloo), and Vivishek Sudhir (of MIT), and made reference to a phenomenon I'd never heard of before: the Unruh effect.  It was named for Canadian physicist William Unruh, who did some of the earliest theoretical work on it, but major contributions were made by Stephen Fulling of the United States and Paul Davies of England.  And it all has to do with what an observer would see if (s)he was accelerating rapidly through empty space.  (Although in a moment we'll have to redefine what we mean by "empty," because a vacuum isn't actually empty at all.)

We're all familiar with the science fiction movie image of what it looks like to jump to superluminal speeds.  Every time the commander of a spaceship shouts "jump to warp!" or "engage hyperdrive!", they're treated to a view like this: 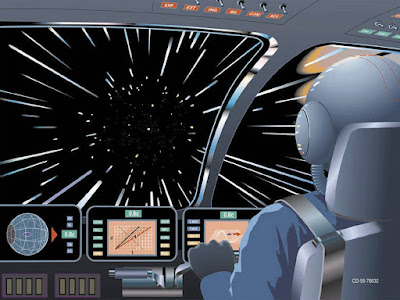 There's no way to tell if this is what such a space traveler going faster than light would actually see, because (1) no one has ever actually experienced it, and (2) it's almost certainly impossible anyway (Cf. the Special Theory of Relativity and my summary of all the papers written on the topic as "Yay!  Einstein wins again!")  But even if actual warp drive and faster-than-light velocities aren't possible, what would it look like if you gazed out of the front window of a spaceship that was accelerating rapidly toward the speed of light?

The idea of stars turning into blurred streaks as we whiz past, as engaging as it is, doesn't seem to capture what we'd actually see in such a situation.

The Unruh effect is what we'd observe.  This is a quantum effect caused by accelerating in a vacuum, which would cause an apparent increase in temperature ahead of us -- it would appear to have a thermal glow.  The reason is that seemingly empty space isn't empty in the conventional sense.  It is filled with quantum fields -- which exist everywhere in the universe -- and the word "empty" here means that those fields are in the ground state, the lowest possible energy configuration space can have.

To a stationary observer, it would indeed appear empty.  But to our space traveler, the rapid acceleration would cause an apparent increase in temperature ahead of the spacecraft.  A stationary observer would consider the empty space ahead as being in the ground state; an accelerating space traveler would measure it to be in a mixed state, in thermodynamic equilibrium with a non-zero ambient temperature.

The vacuum of space would seem to glow.  That's the Unruh effect.

Just like our discussion on Monday of simultaneity, asking "so what temperature is it really?" is a meaningless question.  The measured temperature -- like just about anything else you could measure -- depends on your frame of reference.  The only thing that every observer, in every reference frame (accelerating or not), measures as precisely the same is the speed of light.  (In fact, it's the constancy of the speed of light in every frame of reference that springboarded our understanding of the relativistic nature of the universe, and directly gave rise to all of the other bizarre effects in the model.)

Nobody has actually observed the Unruh effect; the temperature increase is small, and the acceleration required is huge.  Even if you could achieve those accelerations, you'd have to eliminate all the other possible sources of a perceived increase in temperature, which are numerous.

Well -- no one has observed it yet.  Šoda, Kempf, and Sudhir believe they have found a way to isolate the system so that the only possible source of temperature rise is due to the detector's acceleration.  "To see this effect in a short amount of time, you'd have to have some incredible acceleration," Sudhir said, in an interview with Science Daily.  "If you instead had some reasonable acceleration, you'd have to wait a ginormous amount of time -- longer than the age of the universe -- to see a measurable effect...  We believe we have found a way to shave that time down to a few hours.  Now at least we know there is a chance in our lifetimes where we might actually see this effect.  It's a hard experiment, and there's no guarantee that we'd be able to do it, but this idea is our nearest hope."

So with luck, this team might have found a way to observe something that no one has ever seen before -- what it would be like to look through the front window of a rapidly-accelerating spaceship.  It may not be as dramatic as the stars-turned-into-streaks effect known and loved by fans of Star Trek and Star Wars, but it's still amazingly cool that we have a chance to see, for real, what they'd see.