It's difficult to talk about neutron stars without lapsing into superlatives.  They're the collapsed remnants of large stars -- those that start out at about eight solar masses or larger -- and form because when the star exhausts its fuel at the end of its life, the ongoing battle between the outward pressure from the heat from the core and the inward pull of gravity from the star's mass goes out of equilibrium.  Gravity wins.  The outer layers of the star fall inward, and the increase in pressure spikes the temperature to an estimated billion degrees Celsius.  This creates a massive explosion -- a supernova -- releasing 10^44 joules of energy.

I don't know about you, but I have a hard time even wrapping my brain around a number that big.  Suffice it to say that the explosion of a supernova releases in a few minutes as much energy as the Sun will produce in its entire ten-billion-year life.

These unimaginable pressures jam together atomic nuclei that otherwise would never have overcome the electrostatic repulsion (all nuclei have a net positive charge, and like charges repel), producing pretty much every element in the periodic table heavier than nitrogen.

So as bizarre as it seems, the oxygen you breathe, the calcium in your bones, the sodium and chlorine you sprinkle on your food at dinnertime, the iron in your blood, the silicon in your window glass, the gold and silver in your jewelry -- all were created in the unimaginable violence of stellar collapse and explosion.

Nota bene: This is an oversimplification; not only are there several types of supernovas which vary some in output, there are other phenomena, like the merger of neutron stars (more on that in a moment), that can create heavy elements and disperse them through the cosmos -- but it'll do as a first-order approximation.  If you're curious about breaking it down further, the following table represents a finer-grained analysis of where all the elements come from: 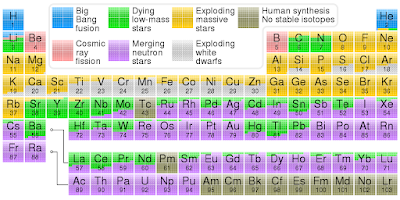 As astrophysicist Carl Sagan put it, "We are made of star stuff...  Our ancestors worshipped the Sun, and they were far from foolish.  It makes sense to revere the Sun and the stars, for we are their children."

The reason this comes up because of a recent discovery that adds a new weird twist to the behavior of neutron stars.  About three thousand light years away is what's left of a triple-star system.  Multiple-star systems aren't that uncommon; a while back I wrote here about one of the most peculiar ones known, Algol (in the constellation Perseus).  The newly-discovered one, though, called ZTF J1406+1222, has an additional layer of strangeness; not only are two of the components neutron stars, they're close enough that they're whirling around their common center of gravity so fast that they complete their orbits in only sixty-two minutes.  In fact, they're close enough that the heavier of the two is siphoning off material from the lighter one.  Stars like this are called black widow binaries, from the unfortunate habit of female black widow spiders eating their mates.

The most astonishing thing about all this is to consider how much force it would take to pull material from a neutron star.  The collapse of the core during its formation was so powerful that it basically crushed the electrons of the constituent atoms into the nucleus, raising its density so high that it's estimated that one teaspoon full of neutron star material would weigh as much as a mountain.

That's the stuff that's being ripped from the surface of the lighter member of the pair.

What about star number three?  The third companion is a much smaller stellar remnant, a white dwarf, that has a ten thousand year orbital period -- almost as if it's edging carefully around its violently spinning friends, keeping at a safe distance while the inner two tear each other apart.

It's unknown how this mad pirouette will end.  The surmise is eventually the two will merge, but what happens then?  If the combined mass is high enough (estimated at about twenty solar masses), then even the neutron/neutron repulsion, mediated by the strong nuclear force, would be insufficient to overcome the gravitational pull, and the collapse will resume -- forming a black hole.  It's also possible that the inertia of such huge masses being accelerated so quickly will rip the two apart completely, flinging neutron star material -- which, once it cools and settles down, would be the aforementioned heavy elements -- across the area of space it's sitting in.

So that's our mind-boggling cosmic tale for today.  It's easy to forget, here on the (comparatively) placid Earth, the unimaginable violence that happens out there in space.  Not only that -- the same violence is what created most of the atoms that make up ourselves and all of the everyday objects we're surrounded with.

When you think about it, there's nothing about the universe we live in that isn't extraordinary.