A door into RNA world

[N.B.: This post is a little on the technical side, if you're not a biology type.  Trust me, the work is worth it, because what these people have discovered is stupendous.]

I had the experience yesterday of stumbling on an article published in Nature this week that, from the title, seemed like something that could only interest biochemistry geeks.

Then I started reading it, and I had to pick my jaw up off the floor.

Before I tell you about the paper, a little background.

Most laypeople know that genes are basically stretches of DNA, and that DNA is a double helix made of chains of smaller molecules called nitrogenous bases, of which there are four -- adenine, thymine, guanine, and cytosine.  (A, T, G, and C for short.)  Because the bases always pair the same way (A to T, C to G), it allows for DNA to replicate itself.

So far, so good.  But how do you get from a gene to a trait?  It took a long time to figure this out, and there's still work being done on how genes switch on and off during development.  But a simplified explanation goes like this:

The first step is that one gene (a piece of DNA) is copied into a similar, but not identical, chemical called RNA.  (This is called transcription.)  RNA is a single helix, so only one side of the DNA gene is copied; the other side only exists so the DNA can be replicated.  Then the RNA goes to a cellular structure called a ribosome, where the base sequence is read in threes (a group of three is a codon), and each trio instructs the ribosome to bring in a specific amino acid.  The amino acids dictated by the codon sequence are linked together into a protein, and those proteins directly generate the trait.  (This is called translation.)  Every trait is basically produced this way, whether it's something simple like skin color, or the interaction between the thousands of genes and proteins that it takes to generate a functioning human heart.

Okay, gene > RNA > protein > trait.  The sequence is so ubiquitous that it's been nicknamed The Central Dogma of Molecular Genetics. 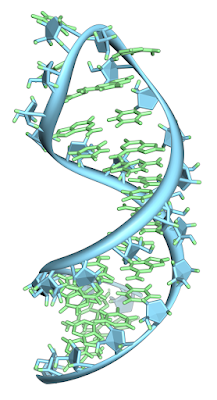 But here's the problem.  When life first began, how did the process get started?

The problem isn't the building blocks; given the conditions that we're virtually certain existed on the early Earth, all of the pieces -- the bases, the sugars that make up the backbone of both DNA and RNA, the amino acids -- form spontaneously and abundantly.  They will even link up to form chains on their own.  It's likely that any Earthlike, water-containing planet has plenty of all the biochemical bits and pieces.

Which is itself made of RNA.

Or at least, that's what I thought until I read this paper.

Enter the team led by Felix Müller of Ludwig-Maximilians-Universität in Munich, Germany, and their paper "A Prebiotically Plausible Scenario of an RNA-Peptide World."  Here's how the paper begins, with a couple of parenthetical notes added by me:

A central commonality of all cellular life is the translational process, in which ribosomal RNA catalyses peptide [i.e. protein] formation with the help of transfer RNAs, which function as amino acid carrying adapter molecules.  Comparative genomics suggests that ribosomal translation is one of the oldest evolutionary processes, which dates back to the hypothetical RNA world [the theory that the earliest self-replicating genetic molecules were RNA, not DNA, which is generally accepted in the scientific world].  The questions of how and when RNA learned to instruct peptide synthesis is one of the grand unsolved challenges in prebiotic evolutionary research.

The immense complexity of ribosomal translation demands a stepwise evolutionary process.  From the perspective of the RNA world, at some point RNA must have gained the ability to instruct and catalyse the synthesis of, initially, just small peptides.  This initiated the transition from a pure RNA world into an RNA–peptide world.  In this RNA–peptide world, both molecular species could have co-evolved to gain increasing ‘translation’ and ‘replication’ efficiency...

We found that non-canonical vestige nucleosides [i.e. unusual bases which are still part of some structures made of RNA, but aren't on the list of the four standard bases], which are key components of contemporary RNAs, are able to equip RNA with the ability to self-decorate with peptides.  This creates chimeric structures, in which both chemical entities can co-evolve in a covalently connected form, generating gradually more and more sophisticated and complex RNA–peptide structures...  We... found that peptides can simultaneously grow at multiple sites on RNA on the basis of rules determined by sequence complementarity, which is the indispensable requirement for efficient peptide growth.

Which is way more dignified than what I'd have written, which is, "Holy shit, we just figured out how gene expression evolved!"
In my AP Biology classes, I ended the unit on evolution with a list of some of the questions that evolutionary theory had not yet solved, and the origins of gene expression and protein synthesis topped the list.  It looks like that one might now be checked off -- which, if my assessment is correct, should put Müller and his team in contention for this year's Nobel Prize in chemistry.
I find it so fascinating that there are still some of the Big Questions out there, and that scientists are actually making inroads into answering them.  Good science doesn't just say "it's a mystery" and forthwith stop thinking.  We're gradually chipping away at problems that were thought to be intractable -- in this case, giving us insight into how life began on Earth four billion years ago.