A tincture of madness

There's long been a supposed connection between being highly creative and being mentally ill. The list of individuals who were both is a long one.  Ernest Hemingway, Georgia O'Keeffe, Hermann Hesse, Maurice Ravel, F. Scott Fitzgerald, Pyotr Ilyich Tchaikovsky, Edgar Allen Poe, Jackson Pollock, Cole Porter, Vincent van Gogh, and Robert Schumann all suffered from varying degrees of mental problems, most of them from severe depression, schizophrenia, or bipolar disorder.  More than one of these spent the last years of life in a mental institution, and more than one committed suicide.
People who have expressed their creativity in technical fields show the same tendencies.  Physicist Ludwig Boltzmann killed himself; Charles Darwin seems to have had severe agoraphobia, and spent most of the later years of his life in virtual isolation; and the wildly brilliant mathematician Kurt Gödel was a paranoid schizophrenic who became so convinced people were poisoning his food that he finally stopped eating completely and starved to death.

"The only difference between myself and a madman," Salvador Dalí famously quipped, "is that I am not mad."  Two thousand years earlier, the Roman writer Seneca said, "There is no genius without a tincture of madness." 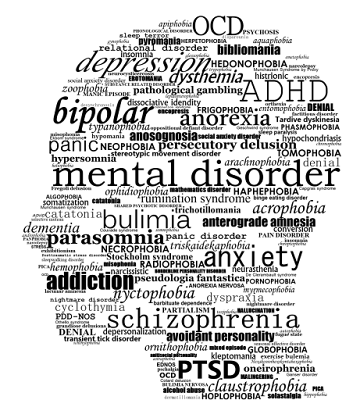 [Image licensed under the Creative Commons Mental illness silhouette, Paget Michael Creelman, Creative Commons Attribution-Share Alike 4.0 International license]
Research has supported that there is a fundamental connection between creativity and mental illness.  One of the chief investigators into this link is Fredrik Ullén, of the Karolinska Institutet of Stockholm, who not only showed that creativity correlates with genetic markers for both schizophrenia and bipolar disorder, but demonstrated a connection between creativity and the dopamine (pleasure/reward) system in the brain -- the same system that is implicated in several forms of mental illness, including schizophrenia, obsessive-compulsive disorder, and tendency to addiction.

Ullén administered a test that was designed to measure a subject's capacity for creative thinking, specifically for developing more than one solution to the same problem or using non-linear solution methods to arrive at an answer. He then analyzed the brain activity of the individuals who scored the highest, and found that across the board, they had lower amounts of dopamine receptors in a part of the brain called the thalamus, one of the main "switchboards" in the higher brain, and responsible for sorting and processing sensory stimuli.

The implication is that creative people don't have as rigid a sorting mechanism as other, less creative people -- that having a built-in deficiency in your relay system may help you to arrive at solutions to problems that others might not have seen.

The connection between the thalamus, creativity, and sorting issues is supported by a different bit of brain research that found that a miswiring of the thalamus is implicated in another bizarre mental disorder, called synesthesia.  In synesthesia, signals from the sensory organs are misrouted to the incorrect interpretive centers in the cerebrum, and an auditory signal (for example) might be received in the visual cortex.  As a result, you would "see sounds." Other senses can be crosswired, however -- the seminal study of the disorder is described in Richard Cytowic's book, The Man Who Tasted Shapes.

Synesthsia is apparently also much more common among the creative.  Alexander Scriabin, the early twentieth century Russian composer, wrote his music as much from how it looked to him as how it sounded.  He describes a sensation of color being overlaid on what he was actually seeing when he heard specific combinations of notes.  The colors were consistent; C# minor, for example, was always green, Eb major always magenta.  And although Alexander Scriabin's synesthesia was perhaps the most intense, he is not the only composer who was synesthetic; the evidence is strong that Liszt, Rimsky-Korsakov, and Olivier Messaien also had this same miswiring.

The studies by Ullén and others have now taken the first steps toward connecting these physiological manifestations with the phenomenon of creativity itself.  "Thinking outside the box," Ullén said, "may be facilitated by having a somewhat less intact box."