An act of faith

Over the last couple of months I've been dealing with a health problem that is one of those collections of symptoms that falls somewhere on the spectrum between "mild inconvenience" and "I'm going to be dead in three months."  Fortunately, at the moment the doctor is leaning strongly toward the former.  (I won't go into further details because I hate it when People Of A Certain Age begin every conversation with what my dad called "the organ recital" -- telling everyone they talk to intimate details of their various health-related issues.)

In any case, this kind of thing absolutely plays hell with someone who has chronic anxiety.  Frankly, over the last two months the anxiety has been far worse than the symptoms themselves, and I have no doubt that it's actually made the symptoms more severe.  But it's put making any firm summer plans on hold, given that my brain keeps shouting at me that I might not be able to follow through on them on account of being incapacitated, hospitalized, or dead.

But it started me down a line of thought that, for once, was productive instead of irrational and paralyzing.  It brought to mind the word faith.  I realize this is not one you'd expect to hear from a skeptical atheist type.  But it struck me that faith is what's invoked any time we make plans -- faith that we and the ones involved will still be around when the plans come to fruition.

That seems pretty dark and pessimistic, but actually it's the opposite.  None of us are guaranteed another day, another hour, another minute, so the only option is to act as if we do, to be right here in the moment and let the future take care of itself.  It's like what Jean-Luc Picard -- then in the mind of the character Kamin -- said to his daughter in the beautiful episode of Star Trek: The Next Generation called "The Inner Light:" "Seize the time, Meribor – live now.  Make now always the most precious time.  Now will never come again." 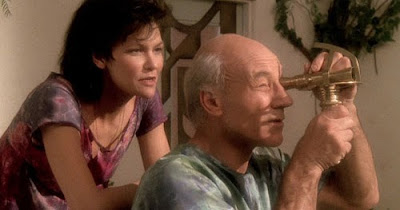 Being ill has made this thought come back to me again and again.  It occurred to me a couple of weeks ago when I bought a couple of tropical plants to replace some of the ones I lost this past winter when my greenhouse heater malfunctioned on one of the coldest nights in January, and I heard a sepulchral voice in my mind say, "Maybe I won't be around to see them flower."  When I saw the daffodils blooming in April and it occurred to me that this might be the last time I ever would.  When I was outside playing with my dogs and wondered how many more opportunities I'd have.

I know these thoughts are coming from my mental illness; I do trust the doctor that I'm probably going to be okay.  But really, isn't that the situation we're all in?  It's all an act of faith.  Getting out of bed in the morning is an act of faith.  We maneuver our way through this dangerous, unpredictable, endlessly weird world and plan for meeting some friends at the pub day after tomorrow, for a vacation this summer, for visiting with family during the winter holidays, simultaneously knowing that none of it might happen.  But that's what we have to do.  The only other option is to descend into panic now because of what might or might not occur later, to willfully destroy our present because our future isn't guaranteed.

My grandma used to tell me, "Worry is like a rocking chair; it keeps you busy but it doesn't get you anywhere."  I'd make it even stronger, though.  Worry wastes what we've got right here in our hands.  I'm not going to say it's easy to conquer; I've had anxiety disorder my entire life, and I'm not expecting it to go away magically.  But I have -- and so does everyone -- control over deliberately choosing to live life the best I can regardless of how much of it I have left.  It's all a risk; every action we take, or decide not to take.  As J. R. R. Tolkien wrote, in The Fellowship of the Ring, "It’s a dangerous business, Frodo, going out of your door.  You step into the road, and if you don’t keep your feet, there is no knowing where you might be swept off to."

The question is not whether you want to take a risk; the question is which risk you want to take.  For me, I'd rather risk the possibility of my plans and aspirations not coming to fruition than risk giving in to my anxiety, then getting to the end of the path and realizing what I missed.

So my advice: carpe the absolute fuck out of every diem you've got left, whether it's one or ten thousand.  I'm completely agnostic about whether there's an afterlife; maybe there is, maybe there isn't.  But as far as what I know for sure, this right here, right now, is all I've got.  And right now the sun is shining and the weather is warm and pleasant and there are people who love me.  There's music to listen to and stories to write and dogs to play with and books to read.  Okay, it won't last forever.  But I'll hang on to the sweetness I've got right now for all I'm worth, and have faith that whatever happens tomorrow, I'll have made the most of today.