I know I've snarked before about the how unbearably goofy the old 1960s television show Lost in Space was, but I have to admit that every once in a (long) while, they nailed it.  And one of the best examples is the first-season episode "The Magic Mirror."

Well, mostly nailed it.  The subplot about how real girls care about makeup and hair and being pretty is more than a little cringe-inducing.  But the overarching story -- about mirrors being portals to a parallel world, and a boy who is trapped behind them because he has no reflection -- is brilliant.  And the other-side-of-the-mirror world he lives in is hauntingly surreal. 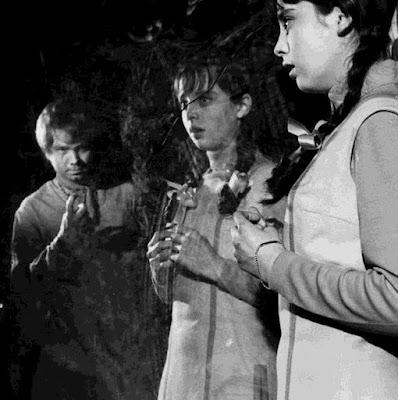 I was thinking about this episode because of a paper that appeared in Physical Review Letters last week entitled, "Symmetry of Cosmological Observables, a Mirror World Dark Sector, and the Hubble Constant," by Francis-Yan Cyr-Ravine, Fei Ge, and Lloyd Knox, of the University of New Mexico.  What this paper does is offer a possible solution to the Hubble constant problem -- that the rate of expansion of the universe as predicted by current mathematical models is significantly smaller than the actual measured expansion rate.
What Cyr-Racine, Ge, and Knox propose is that there is an unseen "mirror world" of particles that coexists alongside our own, interacting only through gravity but otherwise invisible to detection.  At first, I thought they might be talking about something like dark matter -- a form of matter that only (very) weakly interacts with ordinary matter -- but it turns out that what they're saying is even weirder.
"This discrepancy is one that many cosmologists have been trying to solve by changing our current cosmological model," Cyr-Racine told Science Daily.  "The challenge is to do so without ruining the agreement between standard model predictions and many other cosmological phenomena, such as the cosmic microwave background...  Basically, we point out that a lot of the observations we do in cosmology have an inherent symmetry under rescaling the universe as a whole.  This might provide a way to understand why there appears to be a discrepancy between different measurements of the universe's expansion rate.  In practice, this scaling symmetry could only be realized by including a mirror world in the model -- a parallel universe with new particles that are all copies of known particles.  The mirror world idea first arose in the 1990s but has not previously been recognized as a potential solution to the Hubble constant problem.  This might seem crazy at face value, but such mirror worlds have a large physics literature in a completely different context since they can help solve important problem in particle physics.  Our work allows us to link, for the first time, this large literature to an important problem in cosmology."
The word "important" is a bit of an understatement.  The Hubble constant problem is one of the biggest puzzles in physics; why theory and observation are so different on this one critical point, and how to fix the theory without blowing to smithereens everything that the theory does predict correctly.  "It went from two and a half Sigma, to three, and three and a half to four Sigma. By now, we are pretty much at the five-Sigma level," said Cyr-Racine.  "That's the key number which makes this a real problem because you have two measurements of the same thing, which if you have a consistent picture of the universe should just be completely consistent with each other, but they differ by a very statistically significant amount.  That's the premise here, and we've been thinking about what could be causing that and why are these measurements discrepant?  So that's a big problem for cosmology.  We just don't seem to understand what the universe is doing today."
I know that despite my background in science, I can have a pretty wild imagination.  It's an occupational hazard of being a speculative fiction writer.  I hear some new scientific finding, and immediately start putting some weird spin on it that, though it might be interesting, is completely unwarranted by the actual research.  But look at Cyr-Racine's own words: a parallel universe with new particles that are all copies of known particles.  I think I'm to be excused for thinking of "The Magic Mirror" and other science fiction stories about ghostly worlds coexisting, unseen, with our own.
I'm not going to pretend to understand the math behind the Cyr-Racine et al. paper; despite having a B.S. in physics, academic papers in the discipline usually lose me in the first paragraph (if not the abstract).  But it's a fascinating and spooky idea.  I doubt if what's going on has anything to do with surreal worlds behind mirrors and boys who are trapped because they have no reflection, but the reality -- if it bears up under analysis -- isn't a whole lot less weird.