For many years we owned two cats, Puck and Geronimo.

Imagine two soft, gentle, affectionate, fluffy kitties.  Puck and Geronimo were the exact opposite of what you just pictured. 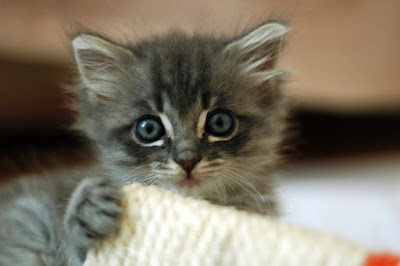 What neither of our cats looked even remotely like.  [Image courtesy of the Creative Commons Nicolas Suzor from Brisbane, Australia, Cute grey kitten, CC BY-SA 2.0]

Puck and Geronimo were siblings, both long-bodied, tough, lean, and solid black.  Puck had some odd features, though.  She had one single white whisker accentuating a face that was already kinda... off.  Her eyes didn't quite line up, so you never could be 100% sure of where she was looking.  She had one broken fang, so her tongue frequently protruded from the side of her mouth.  Plus, her voice sounded like a creaky wheel.  She was actually quite a sweet, affectionate cat, but even dedicated cat lovers had to admit she looked like she had a screw loose.

Geronimo, on the other hand, hated everyone, with two exceptions: (1) my wife; and (2) our dog, Grendel.  When we adopted Grendel, we were assured by the shelter that he was great with cats.  But shelter staff -- no insult intended, they do amazing work -- can sometimes overplay animals' good qualities in the interest of getting them adopted, so when we brought him home, we introduced him to the cats on leash, with me hanging on to my end of it like grim death.  Puck, he ignored completely.  Then he came up and sniffed Geronimo, who sniffed him back (without hissing, which was Geronimo's primary way of communicating with the entire world).  So I tentatively relaxed my end of the lead...

... and Grendel lifted his big front paw and body-slammed Geronimo to the floor.

I leaped forward, yelling, "Noooooooo....!!!!"  But then Grendel started to lick Geronimo's face.  Geronimo, although still pinned to the ground, started purring.  And thus was born the only interspecies gay romance I've ever witnessed.  They were boyfriends for as long as we had them.

But other than those exceptions, Geronimo viewed the entire world with something between haughty disdain and utter loathing.  Sometimes I'd look up from what I was doing to find Geronimo staring at me, his yellow eyes narrowed to slits, and he was clearly thinking, "I am going to disembowel you in your sleep."

What brings all this up is a paper that appeared in Nature last week about some research done at Kyoto University.  A team led by animal behavioral psychologist Saho Takagi did a clever set of experiments to see if cats could not only learn their own names but the names of other cats, and their results suggest that the answer is yes.

They worked with two sets of cats -- household pets, and "café cats."  Apparently in Japan, it's common to have cats living in cafés, for the benefit of patrons who would like to pet cats while they have their coffee and pastries, or at least have cats glaring at them and making harsh judgments about their general appearance.  They had their test subjects "softly restrained" by volunteers, who I hope were wearing body armor at the time, and the cats were given vocal stimuli (the cats' own names, the names of other cats living in the same place, and neutral words falling into neither categories), along with photographs of different cats, sometimes the photograph of the cat being named, sometimes not.

They found that the cats tended to look more quickly and for a longer duration at photographs when the photograph was of the cat being named.  It was evident that the cats tested did indeed know the names of the cats that cohabited with them.  (Except for one test subject who "completed only the first trial before escaping from the room and climbing out of reach.")

I found these data mildly surprising, considering that our own cats gave no evidence of knowing either their own names or each other's.  Geronimo usually responded to being called as follows:

Us:  Geronimo, come get your dinner!

Us: We have a plate of fresh salmon for you!

So I don't know how we'd have been able to tell if he did know his name.

But all of this does point out something I've always thought, which is that a lot of animals are way smarter than we give them credit for.  I know one of our current dogs, Guinness, always gives us this incredibly intent look when we talk to him, as if he's trying his hardest to understand every word we're saying.  Our other dog, Cleo, spends a lot of time ignoring us, but she's a Shiba Inu, which in my opinion is a cat wearing a dog suit.

So okay, maybe that doesn't exactly support the contention that our pets are really smart.  But my point stands.

In any case, that's our cool piece of animal behavior research for today.  If you are the owner of two or more cats, see if you can figure out if they know each other's names.

If any of your cats have a temperament like Geronimo's, you might want to have fresh salmon handy.