A while back there was a rumor circulating that using cellphones could give you brain cancer. A study of 420,000 cellphone users, sponsored by the National Cancer Institute, indicates that there is no correlation between cellphone use and cancer, which caused sighs of relief from the thousands of people who like to discuss details of their sex lives and intimate health issues in public places.

Now, however, thanks to a scary email I received yesterday, I find that cellphone users have worse things to worry about than cancer; using your phone can simply make your brain explode.

Don't believe me?  I'll show you.  I excerpt part of the email below:

It's not a joke, it's TRUE.  27 people have died receiving calls from these numbers.  This has appeared on news programs and has been verified as true, it's not a hoax.  Please forward this on to all the people you care about!

Well, first off, it's a little ironic that I was the recipient of this email.  My phone service provider gives me a weekly rundown of use time, and I average about fifteen minutes a day.  Most of this use is not talking to people, but playing an idiotic game called Snood that I somehow have become addicted to.  Snood involves using a little catapult to launch funny-looking faces at an array of other funny-looking faces, with the Tetris-like goal of getting three or more in a row, at which point they fall off the screen.  The goal is to get all of the faces to fall.  I'd like to say I enjoy Snood, but honestly, mostly what it does is piss me off, because I always flub easy shots and then achieve phone-hurling levels of anger.
I should probably avoid games altogether, honestly, and find a hobby that is more suited to my temperament and level of technological skill, such as making music by banging two rocks together.

Part of the problem is that besides being a Luddite, I just hate telephones in general.  I actually enjoy being in a place where I can't be reached by telephone.  I'm sort of like Pavlov's dog -- but instead of salivating, when the phone rings, I swear.  If people want to communicate with me, my order of preferred modes of contact is as follows:
I will go to amazing lengths to avoid talking on the phone.  When we order take-out, my wife places the order (two-minute phone conversation) and I drive to pick it up (at least twenty-minute drive each way, because we live in the middle of nowhere), and I still think it's an excellent tradeoff.  As far as people calling me, thank heaven for caller ID, which at least allows me to screen the calls I get and ignore the ones from people I don't want to talk to, which is just about everyone.  The idea of taking a telephone with me, so I can be reached anywhere, has about as much appeal as taking along my dentist on vacation so that he can interrupt my lying around on the beach by doing a little impromptu root canal.
But I digress. 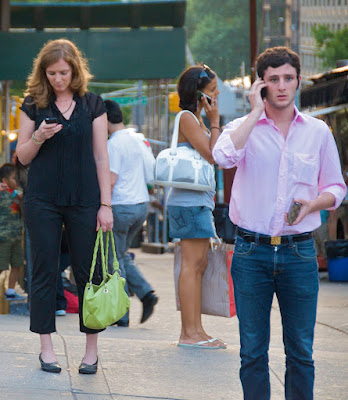 [Image licensed under the Creative Commons Ed Yourdon from New York City, USA, People using cellphones on a street in New York, CC BY-SA 2.0]
For those of you who actually do use your phones to communicate with other human beings, should you worry about picking up your phone, for fear of your brain exploding?  The answer, fortunately, is no, and we don't need to have a study funded by the National Brain Explosion Institute to prove it.  Without even trying hard, I can find three problems with the contents of the email:

First, there's no way that a cellphone could transmit sound waves at a high enough volume to cause any damage.  Phone speakers are simply not capable of producing large-amplitude (high decibel level) sounds -- phone use isn't even damaging to your ears, much less your brain.  You're at more risk of ear damage from turning the volume up too high when you're listening to music through earbuds than you are from talking to someone on your phone.

Second, how do they know all of this, if all the people it happened to died?  Did the victims pick up their phones, say "Hi," and then turn to their spouses and say, "OMIGOD ETHEL I JUST RECEIVED A CALL FROM 9888308001 AND THE NUMBER CAME UP RED AND NOW I'M HAVING A BRAIN ANEURYSM ACCCCCKKKKK"?

Third, the email itself indicates that the originator has the intelligence of a peach pit, because anyone who's taken high school physics knows that it's impossible for a wave to have high frequency and high wavelength at the same time, as wavelength and frequency are inversely proportional, sort of like IQ and the likelihood of being a Flat Earther.

So, anyway, feel free to continue using your phones without any qualms, and I'll feel free to continue to not use mine.  Maybe one day I'll eventually arrive in the 21st century, and stop being such a grumpy curmudgeon about telephones, and consent to carry one around so I can have constant, 24/7 availability to receive calls about my car's extended warranty.

But don't expect it to happen any time soon.