I've been interested in rocks since I was a kid.  My dad was a rockhound -- more specifically, a lapidary, who made jewelry from such semiprecious stones as turquoise, agate, and jasper.  The high point of my year was our annual trip to Arizona and New Mexico, when we split our time between searching for cool rocks in the canyons and hills of the southwestern desert and pawing through the offerings of the hundreds of rock shops found throughout the region.

Besides the simple beauty of the rocks themselves, it fascinated me to find out that with many rocks, you could figure out how and when they formed.  A lot of the gem-quality rocks and minerals my dad was looking for -- malachite, azurite, and opal amongst them -- are created by slow precipitation of layers of minerals from supersaturated water; others, such as lapis lazuli, rhodonite, and garnets form when metal-bearing rocks are metamorphosed by contact with magma far underground. 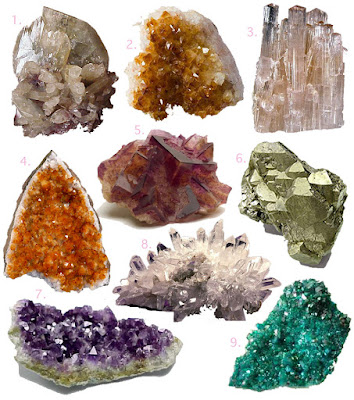 Once I found out that the "when" part was also often knowable, through such techniques as radioisotope dating and stratigraphy, it was always with a sense of awe that I held pieces of rock in my hand.  Even around where I live now, where there are few if any of the lovely gem-quality stones you find in the southwest, there's still something kind of mind-boggling about knowing the layers of limestone and shale that form the bedrock here in upstate New York were formed in the warm shallows of a warm ocean during the Devonian Period, on the order of four hundred million years ago.

But if you think that's impressive, wait till you hear about the research out of the University of Johannesburg that was published in the journal Icarus last week.

The research centered around a stone in the desert of western Egypt called Hypatia, given the name by Egyptian geologist Aly Barakat in honor of the brilliant, tragic polymath whose career was cut short when she was brutally murdered by a mob on the orders of Cyril, bishop of Alexandria.  (The aftermath, although infuriating, is typical of the time; Hypatia was largely forgotten, while Cyril went on to be canonized as a saint by the Roman Catholic Church.)  The stone, fittingly considering Hypatia's contributions to astronomy, turns out to be extraterrestrial in origin, later falling as a meteorite to the surface of the Earth.

But "extraterrestrial" is a big place, as it were.  Where exactly did it form?  Chemical tests on the rock found that it didn't match the composition of any known asteroid or comet; then, the mystery deepened when it was found to contain nickel phosphide, which has never been found on any solid material tested in the entire Solar System.

Further tests only made the rock seem more anomalous.  Silicon, second only to oxygen as the most common element in the Earth's crust (a little over 28%, to be exact), was almost absent, as were calcium, chromium, and manganese; on the other hand, there was far more iron, sulfur, phosphorus, copper, and vanadium than you'd expect.  The ratios were far off not only from rocks in our Solar System, they didn't match the composition of interstellar dust, either.

The researchers decided to go at it from the other direction.  Instead of trying to find another sample that matched, they looked at what process would create the element ratios that Hypatia has.  And they found only one candidate that matched.

A type 1a supernova.

Type 1a supernovas occur in binary star systems, when one of the stars is relatively low mass (on the order of the Sun) and ends its life as a super-compact white dwarf star.  White dwarf stars have an upper limit on their mass (specifically about 1.4 times the mass of the Sun) called the Chandrasekhar limit, after Nobel Prize winning astronomer Subrahmanyan Chandrasekhar.  The reason is that at the end of a star's life, when the outward pressure caused by the fusion in the core drops to the point that it can't overcome the inward pull of gravity from the star's mass, it begins to collapse until some other force kicks in to oppose it.  In white dwarf stars, this occurs when the mutual repulsion of electrons in the star's constituent atoms counterbalances the pull of gravity.  In stellar remnants more than 1.4 times the mass of the Sun, electrostatic repulsion isn't powerful enough to halt the collapse.  (The other two possibilities, for progressively higher masses, are neutron stars and black holes.)

In binary stars, when one of the members becomes a white dwarf, the gravitational pull of its extremely compact mass begins to siphon material from its companion.  This (obviously) increases the white dwarf's mass.  Once it passes the Chandrasekhar limit, the white dwarf resumes its collapse.  The temperature of the white dwarf skyrockets, and...

The whole thing blows itself to smithereens.  Fortunately for us, really; a lot of the elements that make up the Solar System were formed in violent events such as the various kinds of supernovas.  But the models of the relatively rare type 1a (only thought to happen once or twice a century in a typical galaxy of a hundred billion stars) generate a distinct set of elements -- and the percent composition of Hypatia matches the prediction perfectly.

So this chunk of rock in the Egyptian desert was created in the cataclysmic self-destruction of a white dwarf star, probably long before the Solar System even formed.  Since then it's been coursing through interstellar space, eventually colliding with our obscure little planet in the outskirts of the Milky Way.

When I was twelve, holding a piece of billion-year-old limestone from the Grand Canyon, little did I realize how much more amazing such origin stories could get.

I think the real Hypatia would have been fascinated.