You've probably heard the old joke about a man going in for major surgery.  "Doc," he says, right before the anesthetic is administered, "I gotta ask... after this surgery, will I be able to play the piano?"

The surgeon smiles reassuringly and says, "Of course you will."

That's what came to mind when I read an article in Science called, "Will You Keep Winning Races Into Old Age?  Your Cells Hold Clues," by Tess Joosse.  I'm hoping that like the aspiring pianist, old age will put me into the winner's bracket, because since I started running semi-competitively forty years ago, I've yet to win a race.  I train, I run regularly, but I'm still (and probably always will be) a solid middle-of-the-packer.  The closest I've ever come was about three years ago, when I came in third in my age group.

To be scrupulously honest, there were only six people in my age group.  But I'll take my little victories wherever I can get them. 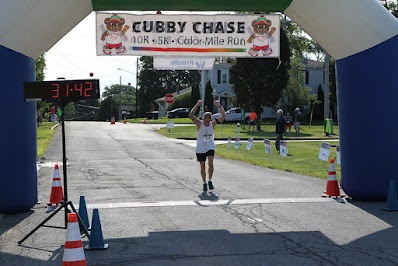 Me last year, about to not cross the finish line first

Be that as it may, I'm still in there trying.  I'm 61, and I know that regular exercise is essential not only for continuing physical health but mental wellbeing.  In fact, on June 8 I'm running in the Ithaca Twilight 5K, a wonderful race down the footpaths along Cayuga Lake, and because I'm recovering from a series of health setbacks I've lowered my sights to simply getting across the finish line without having to be carted over it in a wheelbarrow.

Even though the "will you keep winning?" part of the headline of the article struck me as funny, the research itself is pretty cool.  Russell Hepple, a biologist at the University of Florida, wondered what was going on with people who are still competitive racers even into old age -- such as his father-in-law, who holds the record time for an eighty-year-old in the Boston Marathon.  Hepple and his colleagues did an assay on the muscle tissue of world-class senior athletes and a group of non-athletes, and found no fewer than eight hundred proteins that were produced in amounts that were significantly different between the two groups.  Some were higher in the athletes; others were lower.  But one obvious patterns was that over half of the proteins the study found were ones that are expressed by, or otherwise affect, the mitochondria.

For some reason, the factoid "the mitochondria are the powerhouses of the cell" is one that sticks in the minds of just about everyone who has taken high school biology, but the way they work is actually pretty amazing.  Your mitochondria are actually symbiotic single-celled life-forms living inside your cells -- they even have their own DNA -- and they have evolved a complex series of chemical reactions (collectively known as aerobic cellular respiration) to break down glucose and store its energy in a molecule called ATP, which is the direct driver of damn near every process living things do.  The amount of ATP created and the rate at which it's used are in an incredibly tight balance; it's estimated that you produce (and consume/recycle) your body weight in ATP every day, which amounts to ten million ATP molecules per second, per cell.

So it's no surprise that octogenarian racers have better mitochondrial function than the rest of us slobs.  In fact, the study found that 176 of the proteins studied were unique to elite senior athletes; how much of that is because of a lucky combination of genes, and how much is because their continuous training has triggered protein production that in non-athletes tapers off or stops entirely, isn't known.

Also an open question is whether administering one or more of these proteins would boost aerobic exercise capacity in older people who aren't athletes (but would like to be).  Luigi Ferrucci of the National Institute on Aging, who co-authored the study, has proposed trying this in mice and seeing if it does increase endurance and stamina, without any untoward side effects.

In any case, I suspect that no matter what I do, I'll never be a gold medalist.  That's okay with me.  I love running for running's sake, and the race community (at least around here) is super supportive of everyone regardless of their level.  (At a race I was in a while back, a twelve-year-old boy had posted himself just past the finish line, and was high-fiving each runner as they crossed.  When I stumbled my way across, he grinned at me and said, "Well done, Shirtless Tattoo Guy!"  That, to me, encapsulates the spirit of racing in my area.)

But I'll be interested to see where this research leads.  Anything I can do to stave off decline (physical or mental) as I get older is a good thing.  Until then, though, I'll keep running, and keep being okay with finishing in the middle of the pack.