Oops, I did it again

The following is a direct transcript of how I got welcomed into a multi-person business-related Zoom call a couple of years ago:

Me: How are you today?

Meeting leader: I'm fine, how are you?

Me: Pretty good, how are you?

Me: *vows never to open his mouth in public again*

I think we can all relate to this sort of thing -- and the awful sensation of realizing, microseconds after it leaves our mouths, that what we just said was idiotic.  When my then fiancée, now wife, told a mutual friend that she was getting married -- after we'd been dating for two years -- the friend blurted out, "To who?"  Another friend ended a serious phone call with her boss by saying, "Love you, honey!"  Another -- and I witnessed this one -- was at a trailhead in a local park, preparing to go for a walk as two cyclists were mounting their bikes and putting on their helmets.  He said to them, "Enjoy your hike!"

The funniest one, though, was a friend who was in a restaurant, and the waitress asked what she'd like for dinner.  My friend said, "The half chicken bake, please."  The waitress said, "Which side?"  My friend frowned with puzzlement and said, "Um... I dunno... Left, I guess?"  There was a long pause, and the waitress, obviously trying not to guffaw, said, "No, ma'am, I mean, which side order would you like?"

I don't think my friend has been in that restaurant since.

This "oops" phenomenon probably shouldn't embarrass us as much as it does, because it's damn near ubiquitous.  The brilliant writer Jenny Lawson -- whose three wonderful books, Let's Pretend This Never Happened, Furiously Happy, and Broken (In the Best Possibly Way) should be on everyone's reading list -- posted on her Twitter (@TheBloggess -- follow her immediately if you don't already) a while back, "Airport cashier: 'Have a safe flight.'  Me: 'You too!'  I CAN NEVER COME HERE AGAIN.", and was immediately inundated by (literally) thousands of replies from followers who shared their own embarrassing, and hilarious, moments.  She devotes a whole chapter to these endearing blunders in her book Broken -- by the time I was done reading that chapter, my stomach hurt from laughing -- but here are three that struck me as particularly funny:

I walked up to a baby-holding stranger (thinking it was my sister) at my daughter's soccer game and said "Give me the baby."

A friend thanked me for coming to her husband's funeral.  My reply?  "Anytime."
A friend placed her order at drive thru.  She then heard, "Could you drive up to the speaker?  You're talking to the trash can."

Lawson responded, "How could you not love each and every member of this awkward tribe?"

This universal phenomenon -- particularly the moment of sudden realization that we've just said or done something ridiculous -- was the subject of a study at Cedars-Sinai Medical Center that came out last week, led by neurologist Ueli Rutishauser.  You'd think it'd be a difficult subject to study; how do you catch someone in one of those moments, and find out what's going on in the brain at the time?  But they got around this in a clever way, by studying patients who were epileptic and already had electrode implants to locate the focal point of their seizures, and had them perform a task that was set up to trigger people to make mistakes.  It's a famous one called the Stroop Test, after psychologist John Ridley Stroop who published a paper on it in 1935.  It's an array of names of colors, where each name is printed in a different color from the one named: 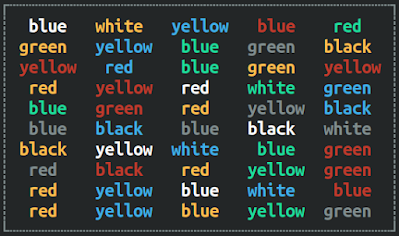 The task is to state the colors, not the names, as quickly as you can.

Most people find this really difficult to do, because we're generally taught to pay attention to what words say and ignore what color it's printed in.  "This creates conflict in the brain," Rutishauser said. "You have decades of training in reading, but now your goal is to suppress that habit of reading and say the color of the ink that the word is written in instead."  Most people, though, when they do make an error, realize it right away.  So this made it an ideal way to see what was happening in the brain in those sudden "oops" moments.

What Rutishauser et al. found is that there are two arrays of neurons that kick in when we make a mistake, a process called "performance monitoring."  The first is the domain-general network, which identifies that we've made a mistake.  Then, the domain-specific network pinpoints what exactly the mistake was.  This, of course, takes time, which is why we usually become aware of what we've just done a moment after it's too late to stop it.

"When we observed the activity of neurons in this brain area, it surprised us that most of them only become active after a decision or an action was completed," said study first author Zhongzheng Fu.  "This indicates that this brain area plays a role in evaluating decisions after the fact, rather than while making them."
Which is kind of unfortunate, because however we rationalize those kinds of blunders as being commonplace, it's hard not to feel like crawling into a hole afterward.  But I guess that, given the fact that it's hardwired into our brains, there's not much hope of changing it.
So we should just embrace embarrassing situations as being part of the human condition.  We're weird, funny, awkward beasts, fumbling along as best we can, and just about everyone can relate to the ridiculous things we say and do sometimes.
But I still don't think I'd be able to persuade my friend to eat dinner at the restaurant where she ordered the left half of a chicken.