It's funny, sometimes, what we don't know.  I've played the flute for almost forty years -- started out self-taught (bad experience with elementary school band), then was lucky enough to study with a brilliant classical flutist named Margaret Vitus for five years when I lived in Seattle.  I've since played in three different bands and a community orchestra, and besides the classical repertoire, I've become fairly proficient in Celtic, English country dance, and Balkan music.

But it wasn't until the last band I was in, the trio Crooked Sixpence, that I actually figured out some peculiarities of my own instrument.  I was fortunate enough to play with Kathy Selby, who is not only a brilliant Celtic fiddler but a physicist (then teaching at Cornell University).  Kathy taught a class called "The Physics of Music," which combined her two areas of expertise -- and the class looked at, amongst other things, how specific instruments work.

So it seemed natural for me to ask her something that's always puzzled me; why flutes go sharp once they warm up.  The difference is greater (obviously) when it's cold out -- so the temperature increase the instrument experiences once I start playing it is bigger -- but it is noticeable even on a warm day.  On first glance, it seemed to make no sense.  Objects expand when they warm up, so (I thought) the thermal expansion would make the tube longer, and the pitch should drop, making it go flat.  That they actually go sharp seemed completely opposite to my intuition.

And of course, she immediately knew the answer; it's because sound travels faster in warm air.  Since the frequency of a wave is directly proportional to its velocity, if the sound wave is moving faster, its frequency goes up -- and so does its pitch.  The thermal expansion of the tube is minuscule, so any drop in pitch from the tube becoming longer is negligible.

I also found out from Kathy -- when I attended a free lecture on musical acoustics she gave -- why a bunch of different instruments playing the same note all sound different.  I knew that that the fundamental note (let's say it's A above middle C) has to have a wavelength that is the same length as the tube (or string, or whatever) of the instrument that's playing it.  A sound of that wavelength will set up a standing wave that then sets the air moving and projects outward toward the listener. 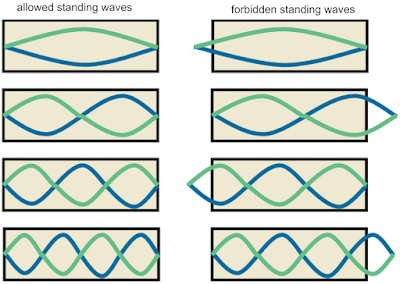 [Image is licensed under the Creative Commons Allowed and forbidden standing waves, File:High School Chemistry.pdf, CK-12 Foundation]
The ones on the left "fit;" the ones on the right don't.  The top one on the left is the fundamental pitch.  The ones further down are called overtones, and that's the key to why instruments sound different.  The greater the number and amplitude of the overtones, the more the sound wave the instrument produces deviates from a simple sine curve. 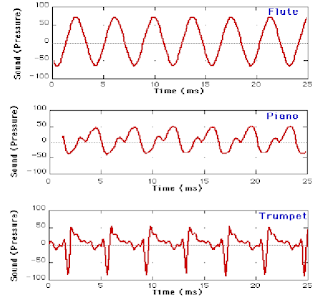 As you can see, flute tones are pretty simple, very close to a sine curve.  But look at the trumpet waveform.  Same fundamental pitch -- the peaks and troughs of the waveform line up with the flute's and the piano's -- but the shape is entirely different.  That's because of the number, and intensity, of the overtones.  (Instruments that have forced vibrations from a bow being dragged against the string, like violins and cellos, have a lot more overtones -- and thus more complex waveforms -- than instruments where a string is plucked or struck, like guitars and pianos.  The same comparison holds for double-reed wind instruments like oboes and bassoons, which produce way more complex sound waveforms than flutes do.)

The whole topic comes up because of a paper that was presented recently at the annual meeting of the American Physical Society, which contained the solution to a long-standing question in the physics of music; why do the pipes of an organ play a tone that is considerably lower pitched than the sound wave that should fit the length of the pipe?

Organ builders have known about this for over a hundred years; to get an organ pipe to sound the note you intend, you have to build it a little shorter than you'd expect.  (The "end correction" you have to use to make the pipe's pitch match what physics would predict from its length is equal to 0.6 times the radius of the pipe.)  But why?  Shouldn't a wave of that length be a little too long for the pipe, and be one of the "forbidden standing waves" shown on the right side of the first figure?

The key to the answer was discovered, quite by accident, by a Swiss organ builder named Bernhardt Edskes.  He was working on repairing an organ, and noticed that a tiny piece of gold plating had flaked off one of the pipes.  He only saw it because when he played that pipe, the flake floated above the top of the pipe.  But since there was air blowing up the pipe, why wasn't the flake completely blown away?

Leo van Hemmen, a physicist at the Technological University of Munich, realized that both the "end correction" question and Edskes's mysterious floating piece of gold were the result of the same phenomenon.  When an organ pipe is played, the rising column of air causes the formation of a stable vortex above the top of the pipe.  When van Hemmen used smoke to make the vortex visible, and its height turned out to be exactly 0.6 times the radius of the pipe, he knew he'd solved the puzzle.  The spinning cylinder of air creates a longer tube for the sound to resonate in -- so the wavelength of the lower-pitched note fits perfectly.

Humans have been making music for tens of thousands of years, and I find it fascinating that we are only now understanding the intricacies of what's going on inside the instruments we play.  It may be that we don't need to know the physics of music to enjoy it, but for me, it's fun to find out how complex these things are -- and that all As above middle C are not created equal.