I am endlessly amused (or endlessly frustrated, depending on my mood) by the way the same piece of information can be interpreted by different woo-woos to support each of their varying, and in many cases mutually contradictory, views of the world.  All of them take the same bit of data, and put their own spin on it, so that it becomes some kind of purportedly incontrovertible support for whatever they already believed.

In short order, you have a multilayered rainbow-colored cake of confirmation bias, with nuts.

Take, for example, the curious photograph that is currently zinging its way around the Internet, an image from Google Maps taken by satellite of a spot near Lisakovsk, Kazakhstan: 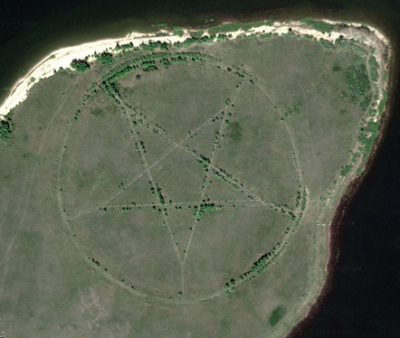 You can bet that the fundamentalist Christians have an answer to that.

The upside-down pentagram is well known as a sign of Satan, and this cadre has accompanied the photograph with a dire-sounding message that the Time Of The Antichrist Is At Hand.  This version of the story is also accompanied by a claim that the pentagram appeared near a pair of towns called "Adam" and "Lucifer," a statement that is supposed to be significant somehow but for which I could find no corroboration whatsoever.  And frankly, that part sounds more than a little spurious to me.  Most of the towns in Kazakhstan that I could find on a map have names like "Zhezkagan" and "Stepnogorsk."  "Adam" and "Lucifer" sound a little... anglo to me to be place names in that part of the world.

And, after all, New York has an Adams County and a Lucifer Falls, and I've seen neither giant pentagrams nor Satan appearing around here, so there's that.

Another thing, though, is that whether this looks like an upside-down pentagram depends on the angle from which you view it.  Turn the photograph upside-down, or (in fact) rotate it by 36° in either direction, and all of a sudden it becomes a right-side-up pentagram.  So color me unconvinced that this is a sign of the End Times.

But of course, the evangelical Christians aren't the only ones who have weighed in on the curious photograph.  You also have the ones who think it's a sign from Mother Earth that we are "abusing nature" and that we need to be more considerate of our environment.  This version of the story has a piece about the pentagram being one of the "signs that we cannot continue to harm our planet without the planet letting us know about it."

These are presumably the same people who think that crop circles are a way for the Spirit of Nature to inform us to give up coal mining and take up organic farming and wear clothes woven from hemp.  And these folks think the upside-down pentagram isn't an evil symbol at all, but a positive, vital neopagan symbol that has suddenly appeared to bring us all to some kind of environmental enlightenment.

Then, you have the people who think that the pentagram is "an unfinished summer camp for the children of the Illuminati."  Because the Illuminati are just that sneaky and secretive, that they would create a structure that you couldn't ever find out about unless you happened to look on Google Maps.  According to this guy, "Kazakistan" (which is how he pronounces it throughout the entire video) is part of the "bloodline of the Illuminati."  Whatever the fuck that means.  But that's where the whole world is being controlled from, so... so... just don't let your guard down for a minute.

You know how that goes.

The speculation doesn't end there, however.  There's another group who weighed in on the topic, and they don't think the star is a symbol of Satan, the Illuminati, or Gaea, but a communiqué from... you'll never guess who. 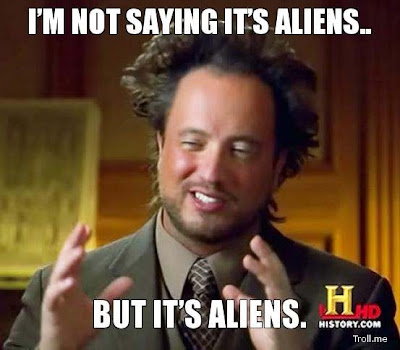 Righty-o.  Because intelligent extraterrestrials who have expended a great amount of effort, time, and energy to get to Earth from a planet light years away would have nothing better to do than to draw a giant star on the ground and then leave.

Of course, the actual explanation turned out to be much simpler.  No Antichrist, Nature Spirits, New World Order, or extraterrestrials needed.

"It is the outline of a park made in the form of a star," archaeologist Emma Usmanova said in an interview with LiveScience about the geographical oddity.  "The star was a popular symbol during the Soviet era.  Stars were often used throughout the Soviet Union to decorate building facades, flags and monuments...  We believe that the star shape was the abandoned site of a Soviet-era lakeside campground."

And Usmanova apparently has years of experience working in the Lisakovsk area, so she should know.

Not that I expect that this will shut up the "It's Aliens" crew, much less the neopagans or the fundamentalists.  But that's how confirmation bias works, isn't it?  You latch on to an explanation for something because it fits what you already believed, and hang on like grim death even if there's a plausible explanation to the contrary.  Because, let's face it; when it comes to choosing an explanation, "an abandoned campground site" just doesn't have the gravitas that Satan, Mother Earth, the Illuminati, and aliens do.