A dear friend of mine sent me a message a couple of weeks ago.  It was a recommendation to watch a recent Netflix series, and read the graphic novel that inspired it.  "Trust me on this," she said.  "This is the story you and I both needed when we were teenagers.  You'll love it... but you might want to have kleenex handy."

The show (and book) are called Heartstopper, by Alice Oseman.  And my friend was right on all counts.

It's the story of two boys in an all-male school in England -- one of them gay (and out), the other bisexual (and, at least at the beginning, closeted).  The story of their deep friendship, mutual attraction, and eventual falling in love is sweet, beautiful, and charming.  I'm not usually someone who picks up young adult fiction, and even less romance fiction; but Heartstopper had me in the palm of its hand right from the beginning.  The "kleenex" part of my friend's comment wasn't because it's in any sense a tragedy; there are (of course) some bumps in the road, and a few of the couple's classmates are bigoted, homophobic assholes, but by and large, it's a heartwarming and upbeat story about overcoming inhibitions, finding happiness, and being open to the world about who you are.

The tears that well up when I even think about the story of Nick Nelson and Charlie Spring are, for me and my friend both, largely because of how long she and I lived in fear and shame.  We were denied the opportunity to explore that part of ourselves; not only to relax and have fun dating, but even to figure out what it meant and get comfortable with who we are.  It was longer for me.  At least she came out publicly as a lesbian fairly young.  It took me until I was fifty-two even to come out to friends.  That's thirty-seven years of being terrified that anyone, even the people who loved me, would find out that I'm attracted equally to men and women.

The first few years, it was not only fear of ridicule or ostracism, it was fear for my safety.  Southern Louisiana in the 1970s was not a safe place for LGTBQ kids.  I know four people in my graduating class (not counting myself) who came out as queer later in life, and none of them even gave a hint of it until after graduation.  If you think it's a significant likelihood that you'll get the shit beaten out of you in the locker room if people find out, why in the hell would you not keep it a secret?

Things are better now.  Thank heaven.  My last year of teaching, three years ago, there were several kids I knew who were out as queer or trans.  But we still have a very long way to go.  A teacher friend of mine in Texas has had to create an Amazon wish list of books that have characters that are queer, non-Christian, or are people of color, because in her state, school district after school district are taking those books off library shelves, denying kids access even to finding out that there are people who aren't straight, white, and Christian.  Apparently, now it's considered "woke" (how I have come to fucking hate that word) to provide a way to say to non-majority kids, "Hey, it's okay.  You are okay.  Be who you are."

Ugly bigotry, while less than what I experienced when I was a teenager, still is all too common.  Just in the last week I saw two posts on social media that made that nauseatingly clear.  One said, "If I ever see a 'trans woman' in the girls' bathroom, I'm going to punch him in the face and tell the judge I identify as the tooth fairy."  The other said, "Men are from Mars, women are from Venus, and any other genders you pulled out of Uranus."

Hurr-hurr-hurr.  It sure is funny to threaten one of the most marginalized groups of people in the United States with violence, and to deny that anyone other than cis/heterosexual people even exist.

Still and all, we're making progress.  Slow and incremental steps, but progress.  My teacher friend's extensive Amazon wish list was cleared out and is on the way to her as we speak -- it took less than twelve hours for her friends to purchase every damn book she asked for.  I may have been late to the game, but I now can say to anyone, "I'm queer/bisexual" and not give a flying rat's ass what they think about it.  Florida governor Ron DeSantis pushed for sanctions on Disney, the state's premier attraction and biggest money-maker, because they balked against his pet project, the "Don't Say Gay" bill -- and Disney responded by opening a new line of queer-themed merchandise called the "Pride Collection," which is about as close as a corporation can come to a collective raised middle finger.

Tomorrow is the first day of Pride Month, and there's a lot to feel good about.  Even so, in a lot of places, it seems like we're regressing, not progressing.  Irrespective of my own sexual orientation, I don't understand why, exactly, people are so determined to control what consenting adults do in the privacy of their own homes.  Why it's just fine to have young adult fiction with heterosexual romances and marriages, but even depicting a queer couple is "ramming wokeness down everyone's throats" and "turning kids gay."  Why the GOP, who pride themselves on their "get the government out of the private sector" stance, are A-okay with the government trying to stop businesses from establishing policies ensuring acceptance and equal rights for LGBTQ employees and customers. 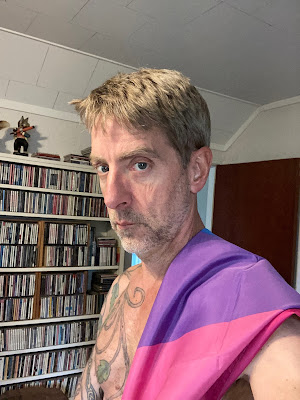 So, yeah.  I cried hard during the scene when Nick and Charlie kiss for the first time.  I'm not ashamed of that.  It's okay to get all emotional when a scene is sweet and touching, which this surely was; it is not okay that some of my tears were because of the fact that at that age, I would never have had the courage, nor even the opportunity, to experience such a thing.  Hell, there was no queer fiction accessible back then, neither books, nor television, nor movies.  I didn't even know such relationships existed.  Note, by the way, that this lack of positive role modeling didn't make me any less queer; all it did was make me ashamed and terrified of being queer.  (Due to my completely dysfunctional upbringing, I was also terrified of having a relationship with a girl, but that's another story entirely.  Suffice it to say that during much of my life, I have been very, very lonely -- and am fantastically fortunate to be in the warm, nurturing, loving marriage I now have.)

It's kind of summed up in the poignant line from Nick, when he realizes he needs to claim his identity, and his chance for love: "I wish knew you when I was younger, and that I'd known then what I know now."

In conclusion, to the increasing number of straight people in the world who are 100% accepting of us non-straight types, thank you.  To my queer friends, keep being strong, keep being defiant, keep being who you are, and happy Pride Month.

And to the homophobes, you can take your ugly, antiquated bigotry and shove it up your ass.