The dunes of Io

By anyone's standards, Jupiter's moon Io is a strange place.  It is by far the most geologically-active body in the Solar System, which is extremely unusual for an object its size.  Since tectonic forces are created by heat generated in the core, and smaller objects radiate away heat faster, it was thought that most planetary moons should be tectonically dead -- essentially, frozen in place.

What keeps the fires in Io going are the tidal forces between Jupiter and the other three "Galilean" moons (so called because they were first spotted by Galileo Galilei in January of 1610, and were instrumental in his championing of the heliocentric model of the Solar System).  But from earthbound telescopes all four just looked like points of light, despite the fact that as moons go, they're pretty big.  In fact, the largest of them -- Ganymede -- is bigger than Mercury, with a radius of 2,634 kilometers (as compared to Mercury's 2,440).  The four, the two aforementioned plus Europa and Callisto, were all named for various of Zeus's lovers, which meant astronomers had an extensive list of names to choose from, given that 95% of Greek mythology was driven by Zeus's inability to keep his toga on.

In any case, the push-and-pull of the gravitational forces from Jupiter and its moons stretches Io, and the friction thus created generates enough heat to keep its core (thought to be made mostly of iron, like Earth's) molten.  This thermal energy drives tectonic forces that dwarf the most violent volcanoes and earthquakes here on our planet.  Io has extensive lava flows, some over five hundred kilometers across.  Its volcanoes have ejected so much debris that there is a plasma ring surrounding Jupiter, sketching out Io's orbit.

We got our first good images of Io from Voyager 1 and Voyager 2 in 1979, and from its brightly-colored, pockmarked surface astronomers said it "looked like a moldy pizza" -- a vivid image that is certainly apt enough: 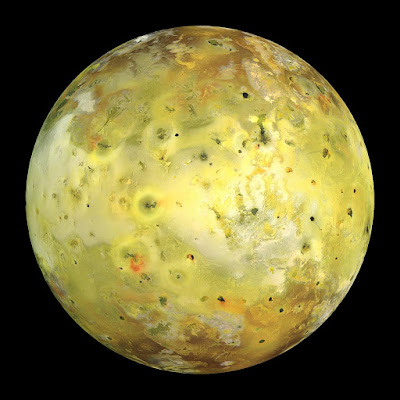 An image of Io taken, appropriately enough, by the spacecraft Galileo in 1995 [Image is in the Public Domain courtesy of NASA/JPL]

The bright yellows and oranges come from crystalline sulfur, which is abundant on the moon's surface.  Also common on its surface is sulfur dioxide, which at Earth's surface temperatures is a colorless gas that smells like rotten eggs; at Io's temperatures, averaging at 110 K (about -160 C), it's a crystalline solid.  The rest is mostly made up of silicate rock and sand.

There's still a lot we don't know about this peculiar place.  One of its odd features is that it has dunes, some of them over thirty meters high.  This should be impossible, as dunes are caused by fluid flow -- on Earth, either wind or water -- and Io has essentially no atmosphere and no liquid component of any kind on the surface.  But a recent paper published in Nature Communications explains a way that dunes can form without any wind; once again, it's caused by Io's extreme volcanism.  The study found that if there's at least a ten-centimeter thick layer of sulfur dioxide ice, and it is contacted by the subterranean (well, subionion) lava flows, the ice sublimates rapidly and explosively, blowing plumes of gas and debris at speeds of up to seventy kilometers and hour, reaching as much as two hundred kilometers high.

The force, though, isn't just exerted upwards, it's exerted outward.  This lateral blast moves enough of the sand and rock on the surface to generate Io's extensive dunes.  A combination of two things -- Io's low gravity and lack of an atmosphere -- means that the airborne debris can move a lot farther than a similar flow could do on Earth.  So while at first glance the processes seem similar to what we know of planetary geology, it's (as far as we know) unique in the Solar System.

"In some sense, these [other worlds] are looking more familiar," says George McDonald, a planetary scientist at Rutgers University, who co-authored the study, in an interview with Science News.  "But the more you think about it, they feel more and more exotic."
If you want to experience mystery and wonder, just look up.  The night sky is filled with a myriad places we are only just beginning to understand.  As French physicist and mathematician Jules Henri Poincaré put it, "Astronomy is useful because it raises us above ourselves; it is useful because it is grand; …  It shows us how small is man's body, how great his mind, since his intelligence can embrace the whole of this dazzling immensity, where his body is only an obscure point, and enjoy its silent harmony."