The meaning of "Two Dignified Spinsters Sitting in Silence"

I have frequently ranted at length about how silly the practice of astrology is.  The last mention of my general disdain for the practice prompted one of my readers to send me an email, the gist of which was, "You haven't even begun to plumb the depths of the silliness," and attached a link to a page called, "The Degrees and Meanings of the Sabian Symbols."

For those of you who would prefer not to risk valuable brain cells even opening this link, allow me to explain that the Sabian Symbols are mystical images, one for each of the 360 degrees of the zodiac.  Another site, simply called "Sabian Symbols," describes them as follows:

Renowned worldwide as both an uncanny divination system and an insightful tool for astrologers, the Sabian Symbols were channeled in San Diego in 1925 by Marc Edmund Jones, a well reknowned [sic] and respected astrologer, and Elsie Wheeler, a spiritualist medium.  They consist of 360 word images corresponding to the 360 degrees of the zodiac (each zodiac sign comprising of 30 degrees)...  The Sabian Symbols are extraordinary for insight, revelation and guidance.  Miracles, big and small, happen in your life when you tap into their field... (it is) an "ancient mind matrix."

Well.  Alrighty, then.  Let's just take a look, shall we?  Here are a few selected Sabian Symbols from various degrees of the zodiac.  Let me know of any insight, revelation, or guidance you got from them, okay?
Okay, so that gives you an idea.  And no, I didn't make any of these up.  Nor did I pick these out because they sound especially weird; they all sound like this.  All I can say is: whatever drugs this guy was on when he came up with these, can I have some? 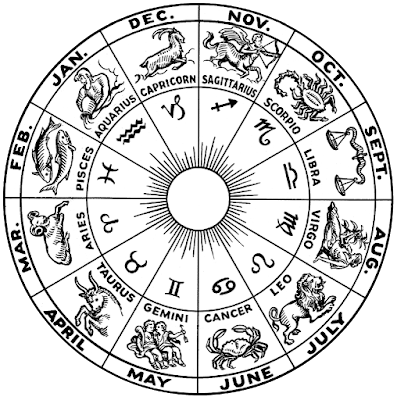 [Image is in the Public Domain]
Of course, the people who believe in this stuff don't think that it was drugs.  They think that Marc Edmund Jones was really channeling a mystical presence.  Once again, quoting from "Sabian Symbols:"

The Sabian Symbol story is embedded in the ancient cultures of the Middle East.  Marc Edmund Jones felt that there was an "unseen agency" - an external, esoteric mind-set at work in the birthing of the Sabian Symbols.  Connection was made through a 'Brother', a member of the ancient Mesopotamian brotherhood, the Sabian Brotherhood.  He believed that they were the 'voices' that were spiritually behind Elsie Wheeler, delivering the messages that became the Symbols...  As we move out of the Piscean age and into the Aquarian age, we are transmuting in many ways, with the vibration of our spiritual and intellectual minds moving into higher gears as we evolve.  In such hectic times, we hunger for meaning and guidance, but often don't have the time or the patience to pause and reflect deeply on our situation.  The Sabian Oracle opens the doorway between our inner feelings and intentions and our conscious mind.  They do this by helping to put what is within us into words.  Being provided with possibilities enables us to act positively and confidently, and think rationally.

My general response to all of that is that if you were thinking rationally you wouldn't be relying on astrology in the first place.  And, of course, the usual problem with symbolic fortunetelling occurs here, just as it does with the Tarot, the I Ching, runes, and so on; the symbols are so weird and open to interpretation that you can make just about anything out of them that you want.  Suppose that for some reason, the "oracle" told me that my symbol for today was Libra, 29-30 degrees ("Three mounds of knowledge on a philosopher's head.")  My first response would be that I didn't know that knowledge came in mounds.  But after that, what does it mean?  Is it saying that I'm smart?  Or that I'm not smart enough and should go study and try to gain more mounds of knowledge?  Or that today would be good for contemplation?  Or that I should be looking for guidance from three different sources?  Or that I could find answers in books by philosophers?

This is why the "Sabian Symbols" site offers "professional Sabian astrology consultations" -- because slobs like me just aren't qualified to interpret what "A butterfly with a third wing on its left side" (Libra, 23-24 degrees) means.

The take-home lesson here, I suppose, is that there is no realm of woo-woo so goofy that someone can't elaborate on it in such a fashion as to make it way goofier.  Wondering whether there might be anything else I could learn from all the time I spent reading this stuff, I clicked on the link that said "Clear your mind and click on this picture of a galaxy" to get wisdom from the oracle.  I got Scorpio, 16-17 degrees, which is "A woman, fecundated with her own spirit, is the father of her own child."   Which, I think, was a symbolic way for the oracle to tell me to go fuck myself.

Oracles can be so hostile, sometimes.