In Dorothy Sayers' novel Gaudy Night, set (and written) in 1930s England, a group of Oxford University dons are the targets of threats and violence by a deranged individual.  The motive of the perpetrator (spoiler alert!) turns out to be that one of the dons had, years earlier, caught the perpetrator's spouse in academic dishonesty, and the spouse had been dismissed from his position, and ultimately committed suicide.

Near the end of the novel, the main character, Harriet Vane, experiences a great deal of conflict over the resolution of the mystery.  Which individual was really at fault?  Was it the woman who made the threats, a widow whose grief drove her to threaten those she felt were smug, ivory-tower intellectuals who cared nothing for the love and devotion of a wife for her husband?  Was it her husband, who knowingly committed academic fraud?  Or was it the don who had exposed the husband's "crime" -- which was withholding evidence contrary to his thesis in a paper?  Is that a sin that's worth a life?

The perpetrator, when found out, snarls at the dons, "... (C)ouldn't you leave my man alone?  He told a lie about somebody who was dead and dust hundreds of years ago.  Nobody was the worse for that.  Was a dirty bit of paper more important than all our lives and happiness?  You broke him and killed him -- all for nothing."  The don whose words led to the man's dismissal, and ultimately his suicide, says, "I knew nothing of (his suicide) until now...  I had no choice in the matter.  I could not foresee the consequences... but even if I had..."  She trails off, making it clear that in her view, her words had to be spoken, that academic integrity was a mandate -- even if that stance left a human being in ruins.

It's not, really, a very happy story.  One is left feeling, at the end of the book, that the incident left only losers, no winners.

The same is true of the tragedy that happened in Buffalo, New York last Saturday.

The accused shooter, eighteen-year-old Payton Gendron, drove for two and a half hours from his home in Conklin, New York, allegedly motivated by trying to find the neighborhood with the highest proportion of Black residents.   He is clearly a seriously disturbed individual.  While in high school, he was investigated by Broome County police for threatening his classmates; ultimately the investigation was closed, with Gendron saying he had been "joking."  One of his former teachers reported that she had asked him for his plans after graduation, and he told her, "I want to murder and commit suicide."  It's a little appalling that someone like him was able to procure body armor and three guns -- including an XM-15 Bushmaster semi-automatic rifle, which is banned in New York state -- without setting off enough red flags to stop a freight train.  I'm not intending to discuss the issue of gun laws, however.  What I want to look at is what created Payton Gendron.  Because at the center of his rage were nothing more than words.  Words, words, words.

He wrote a 180-page manifesto that mirrors the "Great Replacement" theory of Jean-Renaud Camus, that the leftists are deliberately crafting policy to replace people of White European descent with immigrants and People of Color.  Gendron made no secret of his views and his intentions.  He had accounts on social media outlets Discord and Twitch; on the former he had a to-do list of preparations for the attack, and he used the latter to livestream the attack itself.  He identified all people of color as the danger, not just immigrants --  after all, the Black people he deliberately chose as targets were just as much American citizens as he is, and almost certainly their ancestors had been here for hundreds of years.
Gendron himself has no problem explaining why he did what he did.  He told investigators, "I simply became racist after I learned the truth."
But he didn't come up with that "truth" himself; others put it there.  Others fed him those lies and distortions, and in his twisted, faulty logic he bought them wholesale.  Gendron himself is, of course, ultimately the one responsible for the shootings; but what blame lies with the people who, whatever their motives, broadcast the ideologies he espoused?

Tucker Carlson, for example, makes his opinion crystal-clear.  Last year he was interviewed by Megyn Kelly for a radio broadcast, and he said, "'The Great Replacement' theory is, in fact, not a theory.  It’s something that the Democrats brag about constantly, up to and including the president, and in one sentence, it’s this: Rather than convince the current population that our policies are working and they should vote for us as a result, we can’t be bothered to do that.  We’re instead going to change the composition of the population and bring in people who will vote for us."
He's not the only one.  Representative Steve King of Iowa said, "The idea of multiculturalism, that every culture is equal -- that’s not objectively true…  We’ve been fed that information for the past twenty-five years, and we’re not going to become a greater nation if we continue to do that."  Texas Agriculture Commissioner Sid Miller posted a photograph of George Soros on Facebook with the caption, "Start the race war."  Fox News host Laura Ingraham isn't exactly subtle, either.  "Massive demographic changes have been foisted upon the American people and they're changes that none of us ever voted for and most of us don't like," she said on her show in 2019.  "From Virginia to California, we see stark examples of how radically in some ways the country has changed.  Now, much of this is related to both illegal and in some cases, legal immigration that, of course, progressives love."
After the shooting, people like Carlson were blasted for using their positions as pundits to stoke fear, rage, and violence -- and very quickly, they responded in kind, absolving themselves of any responsibility.  "The truth about Payton Gendron does tell you a lot about the ruthlessness and dishonesty of our political leadership," Carlson said, the day after the shooting.  "Within minutes of Saturday’s shooting, before all of the bodies of those ten murdered Americans had even been identified by their loved ones, professional Democrats had begun a coordinated campaign to blame those murders on their political opponents.  'They did it!' they said, immediately...  So, what is hate speech?  Well, it’s speech that our leaders hate.  So because a mentally ill teenager murdered strangers, you cannot be allowed to express your political views out loud.  That’s what they’re telling you.  That’s what they’ve wanted to tell you for a long time."
Which packs a lot of terrifying rhetoric into one paragraph.  First, no sensible person, left, right, or center, defines hate speech as "speech our leaders hate."  The Supreme Court itself has given the term a clear definition: "abusive or threatening speech or writing that expresses prejudice against a particular group, especially on the basis of race, religion, or sexual orientation."  Second -- sure, Gendron is mentally ill, but that's not why he targeted Black people for murder.  Lots of people have mental illness (I've blogged here more than once about my own struggles with it), and very few of them murder people.  Blaming mental illness for Gendron's actions is just a way for Carlson to deflect any criticism leveled at him for the results of what he has said vehemently and repeatedly.
Third, virtually no one -- once again, regardless of political stripe -- is trying to stop people from expressing their political views.  The vast majority of us agree with British writer Evelyn Hall, "I disagree with what you've said, but I will defend to the death your right to say it."  Conservative commentator and former GOP Representative Joe Walsh, who -- despite the fact that we'd probably disagree on a lot of things -- is one of the most honest, honorable voices we have today, said, "Try being nonpartisan for a day.  Call out stuff that’s wrong, stupid, or dishonest no matter where it comes from.  Even if it comes from your side. Just try it."  And he summarized Tucker Carlson's self-defense as follows: "[Carlson basically told] his audience that THEY are the victims.  Not the ten innocent souls killed in Buffalo.  Nope, Tucker’s audience are the real victims here...  [His attitude is] 'I don’t even know what white replacement theory is.  All I know is America is becoming less and less white.  And that’s a really bad thing.  But that makes me a racist?  For just stating facts?'" 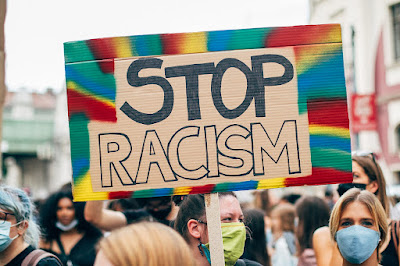 [Image licensed under the Creative Commons Ivan Radic, A colorful Stop Racism sign (50115127871), CC BY 2.0
Of course, all Carlson, Ingraham, et al. are trying to accomplish are two things; to use emotionally-charged language in order to make their own opinions sound unassailable, and to generate such a negative spin on their opponents' thinking that listeners are left believing that only morons could possibly agree with them.
I'm appalled not just because these political hacks are using this tragedy to hammer in their own views with an increasingly polarized citizenry; but because they are doing this, willfully blind to the end results of their words, just like the Oxford don in Gaudy Night whose dedication to the nth degree of academic integrity made her blind to the human cost of her actions.  Words are tools, and they are using them with as much thought and responsibility as a five-year-old with a chainsaw.

I will end with a devout hope for healing for the Buffalo community that has lost ten of its people, and that the families of those who died will be able to find consolation in the outpouring of sympathy from the vast majority of Americans who still value compassion over political rhetoric.  And to the ideologues who are using this tragedy as a platform to defend their own repugnant views, I can only say: shut the hell up.