A ripple in space-time

I find it nothing short of mind-boggling how far we've come in creating equipment with which to explore the cosmos.

The first telescope was invented in 1608, and it was so crude (mostly with respect to the clarity, resolution, and magnification of the lenses) that it accomplished little more than make the blurry bits look bigger.  For example, Galileo used it to see Saturn's rings in 1610, but to him they looked like "handles" -- it took another half-century for the telescope to improve enough to allow Christiaan Huygens to see that they were actually full rings encircling the planet.

Not long after that, Isaac Newton invented the reflecting telescope, substituting parabolic mirrors for lenses, allowing for a much shorter tube length (and thus easier alignment).  The equipment gradually grew in power and resolution, and we were able to peer farther and farther out into space with increasing clarity.

Then, a little before 1900, things exploded.

In 1887, Albert Michelson invented the interferometer, which used a property of light to analyze the motion of the Earth through space, and which led directly to Albert Einstein's Theories of Relativity.  The idea here is that you take a beam of light, split off part of it, and reflect that split part at right angles to the original beam; then you bounce both pieces back so they recombine after traveling equal distances.  At that point you should see positive interference -- the wave crests and troughs should all still be "in phase" (i.e. lined up). 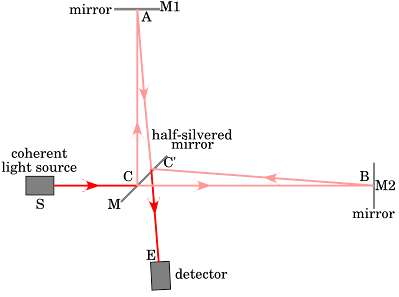 Michelson and his colleague Edward Morley used the interferometer to test a model that had been used to explain the wave nature of light -- the "luminiferous aether."  The idea here is that if light is a wave, something had to be waving -- just as water molecules move in a water wave, air molecules move in a sound wave, and so on.  When light goes through a vacuum, what, exactly, is waving?  Because it was impossible for people to imagine how a wave could travel through a complete vacuum, it was suggested that space wasn't a complete vacuum -- that there is some kind of stuff (the aether) filling it, and it is through this medium that light propagates in space.

Because the interferometer involved beams of light traveling at right angles, Michelson and Morley surmised that this meant they were moving at different speeds through the aether because of the Earth's motion around the Sun.  To take the simplest configuration, if you place the device so that one beam is parallel to the direction of the Earth's motion and the other perpendicular to it, the parallel one would be dragged back by the aether on the way out and propelled faster on the way back (in the fashion of a boat first moving upriver, then turning around and going downriver).  The perpendicular one, on the other hand, would be deflected slightly to the side (like a boat moving cross-current).  In that case, it was possible to calculate exactly how out of phase the two beams would be with each other by the time they recombined at the detector.  You should see an interference pattern -- the two waves would partially reinforce each other and partially cancel each other out, creating a pattern of stripes.

Interference between two separate waves, the green one moving to the right and the blue one moving to the left -- the red wave is what you'd see as the waves pass through each other, with the peaks and troughs alternately adding to and subtracting from each other. [Image licensed under the Creative Commons Lookangmany thanks to author of original simulation = Wolfgang Christian and Francisco Esquembre author of Easy Java Simulation = Francisco Esquembre, Waventerference, CC BY-SA 4.0]

In fact, they didn't see an interference pattern -- the two beams were still completely in phase when they recombined -- which proved that the luminiferous aether didn't exist, and there was no "aether drag" phenomenon as the Earth moved through space.  It left unsolved the original question -- "what's waving when light moves through a vacuum? -- until Albert Einstein added the electromagnetic theories of James Clerk Maxwell to light apparently having an invariant speed regardless of how fast you're traveling to completely upend physics with his Special Theory of Relativity.

All this is just a lead-up to looking at how far we've come since then.  Because it's a twist on the Michelson-Morley interferometer that is currently being used to test a prediction of Einstein's General Theory of Relativity -- the existence of gravitational waves.  The General Theory, you'll recall, says that space-time is like a three-dimensional fabric that can be stretched and compressed by the presence of massive objects -- that, in fact, is what gravity is, a deformation of space-time that's a little like what happens when you put a bowling ball on a trampoline.  Objects are deflected toward a massive object not because there's a literal pull being exerted, but because they're following the lines of curved space-time they're passing through (picture rolling a marble on the aforementioned trampoline and you'll get the picture -- the marble might appear to be attracted to the bowling ball, but it's just following the curves of the trampoline it's rolling on).

So the General Theory states that if you have massive objects moving at a high velocity, they should create waves in space-time that would propagate outward at the speed of light.  Those waves would be really small, unless you're talking about very large masses moving very fast -- such as two black holes orbiting each other.  Here's a rather contrived way to picture it:  Take a barbell, and attach it at the center of the bar to a powerful motor that spins it rapidly.  Lower it into a pond so that the weights are sweeping in circles across the surface.  The rippling waves created would spread out across the pond -- those are what gravitational waves of two orbiting black holes do to the fabric of space-time.

So how in the hell could you detect something that weak, from so far away?

Enter LIGO -- the Laser Interferometric Gravitational-Wave Observatories, in Livingston, Louisiana and Hanford, Washington.  The idea here is precisely the same as the Michelson-Morley interferometer I described earlier, except instead of some mysterious aether, they're looking for gravitational waves sweeping past the Earth from a billion light years away.  What General Relativity predicts is that as those waves roll past, the tube of the device that's parallel to the wave should compress a little, while the one perpendicular would be unaffected (well, it'd shrink a little in diameter, but that wouldn't affect the experiment).  Since the two laser beams would for an instant be traveling different distances, they'd momentarily go out of phase, and you'd pick up an interference pattern.

And it worked.  In 2015, gravitational waves were detected, just as Einstein predicted.  They've now been seen over ninety times.

I've said before that just about every time I talk about astrophysics, I should just write "Einstein wins again!" and call it good.  (Physicist Sabine Hossenfelder, whose wonderful YouTube channel Science Without the Gobbledygook is a must-watch, just pops a photo up on the screen of Einstein sticking his tongue out every time his name comes up, and says, "Yeah, that guy again.")  Relativity, as bizarre as some of its predictions are, has passed every single test.  And now, the physicists are using LIGO to look for another prediction of Relativity -- that as gravitational waves pass other massive objects, the waves themselves will be deflected -- just as the waves in the pond would be if there was rock protruding above the surface of the water.  That deflection should be detectable from Earth, even though it's even more feeble than the original wave.

I bet they'll find it, too.  We've come light years from the crude telescopes of the seventeenth century -- in only four hundred years, we've progressed from blurry glimpses of large objects in our own Solar System to observing the faint traces of phenomena that occurred (to borrow a phrase) long ago in a galaxy far, far away.  With the speed our equipment is improving, you have to wonder what refinements we'd see a hundred years from now -- or even a decade.

What new wonders will open up before us?  Galileo and Huygens and the rest, I think, would be thrilled to see what they started -- and where it led.