An open letter to straight Americans

I hope you recognize the path the United States is on, and where it leads.  Because it's easy to blind yourself to problems that don't affect you.  That is, at its heart, what minorities mean when they talk about privilege.  As a Black friend of mine put it, "White privilege doesn't mean White people's lives are easy; it just means that race isn't one of the things making them harder."

Recent developments in Florida (why the fuck is it always Florida?) should bring that into sharp focus.  Because of the state's "Don't Say Gay" law, school administrators in Orange County have now told staff that they can't display rainbow "Safe Space" stickers in their classrooms, they can't assign reading material with any LGBTQ content to their classes, they are required to tell parents if they find out a student is queer, and LGBTQ staff members cannot have photographs of their families displayed anywhere -- including on their own desks.

My first question to my straight readers is: do you have any idea what effect this has, both on staff and on students?

This kind of ugly, bigoted horseshit is why I spent forty years unable to admit that I was bisexual.  During most of that time I couldn't even admit it to myself.  I grew up thinking same-sex attraction was something to be ashamed of, or at the very least, to be fearful about.  Well, fear was justified; I want you to think, really think, about what it'd be like if you were afraid to take your significant other out to dinner because then people would realize you were together.  That you couldn't walk down the street of your own home town holding hands because you'd be jeered at, have hateful epithets thrown at you, and (in all too many places) risk actual physical violence.  That you'd been told over and over that loving who you love made you abnormal, sinful, disgusting, aberrant.

It's that hell that this law is forcing LGBTQ people back into.

We never really left it, honestly, but a lot of us felt like at least we were heading in the right direction.  In the last five years I've become more and more like the iconic character Nick Nelson from Alice Oseman's brilliant graphic novel series Heartstopper: 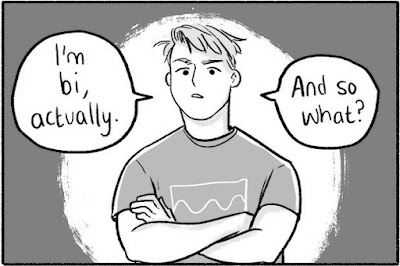 I'm damn lucky I'm in a situation I can do that.  I live in a pretty tolerant part of the country.  I'm married to a woman, which is fortunate in two respects; not only does it shield me from the stigma that people in same-sex relationships face every single day, my wife is a wonderful human being who accepts me for who I am.

But consider what I, and countless others like me who spent most of their lives hiding, lost in the process.  Think about what it'd be like if there was something about you that you didn't ask for and couldn't change, and now there were laws against it being out in the open.  How about... wearing glasses?  What if at work, you were told you couldn't wear glasses, and had to pretend you could see well?  If anyone asked you about it, you had to say you could see just fine.  Any visits to the optometrist had to be made in secret -- if possible, in another town where you wouldn't be recognized going into the place.  No books in your kids' school could show, or even mention, characters who didn't have 20/20 vision.  And if you did become angry enough to say "fuck it" and wore your glasses in public, you would be ridiculed or beaten up for it.

See how horrifying that sounds?

It's been years that we've known that homophobic ignorance flies in the face of the actual science, but we Americans don't exactly have a stellar record of listening to the scientists about anything.  Back in 2015, Scientific American published an article that goes into the biology of human sexuality, and the details are fascinating; but truthfully, it can be summed up as, "Sexuality is complex, and it isn't binary."

The homophobes have responded by mischaracterizing how the medical professionals address the issue, because (unfortunately) straw man arguments are all too effective when people don't know, or don't want to know, the facts.  Just last week I saw someone post on social media, "If a five-year-old is old enough to decide what gender they are, an eighteen-year-old is old enough to own a gun."  I'm not going into the last half of it, but the first half is so abjectly ridiculous it's a wonder it generated anything more than derisive laughter.  It makes it sound like an anatomically male five-year-old says, "Hey, I'm a girl now," and the parents immediately whisk them off to get gender-reassignment surgery.  According to a statement by medical professionals who address issues of gender dysphoria, surgeries of this sort are only done if the child is anatomically intersex, and even then doctors almost always wait until the child is the age of puberty before taking any kind of irreversible action.

Unfortunately, no one I saw responded to the person who posted that with, "THAT NEVER HAPPENS."  We've become afraid even to fight the battle, or perhaps just too damn exhausted to argue.

It's understandable.  This is the third time this month (ironically, Pride Month) I've written about these issues here at Skeptophilia.  At some point we feel like, "What more can I say?  And what good is it doing anyhow?"  So that's why I'm going to ask not my queer readers, but my straight ones, to think long and hard about something: what would it take to make you stand up and say, "Hell no, this is wrong," even though it only directly affects a group you don't belong to?  If you were a straight teacher in Orange County, Florida, would you be willing to put up a rainbow flag in your classroom and say to administrators, "Bring it on"?  To say to Ron DeSantis and the hundreds of other elected officials in this country cut from the same cloth, "This is not gonna happen.  Not on my watch."? 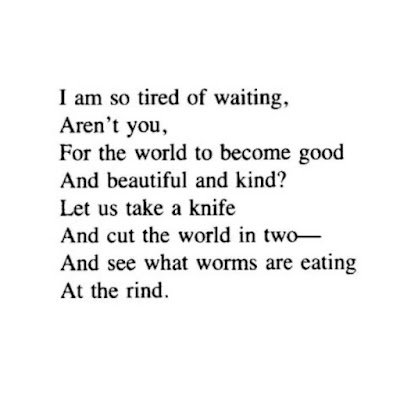 "Tired," by the inimitable Langston Hughes

It's easy to support LGBTQ rights in ways that risk nothing.  You vote for candidates who support equal rights for all?  Great, awesome, good for you.  But we are hurtling down a tunnel into a deep, dark place that a lot of us thought we'd left back in the 1980s.  And that downward spiral won't stop until straight people stand up and say, "I'm going to do whatever it takes to halt this, even if it means putting myself in the bullseye."

That is what it means to be an ally.

Thankfully, there are straight people who do just that.  I've laughed with a dear friend of mine, who is straight as they come, because he owns (and wears publicly) more Pride gear than I do.  He's one of the ones who would not hesitate to give a big old middle finger to homophobes, and say, "What are you gonna do about it, asshole?"

But there are too damn few people like him.

So I'm asking my straight readers to stand up and make your voices heard.  It's the only way any of this is going to stop.  And keep in mind that if the bigots win this fight, it isn't going to end there, because queers aren't the only ones these people hate.  Remember the oft-quoted statement by anti-Nazi activist Martin Niemöller that ends, "Finally, they came for me -- and by then, there was no one left to speak for me."

Please, please don't wait until then.

Maybe there's a time that other-sides-ism is appropriate, but that's not now.  I am not obligated to respect your opinion if your opinion denies the rights, and even the humanity, of another group of people.  There is no morally and ethically defensible justification for what is happening in the United States right now.

Pride ends today, but don't expect me to shut up about it.  I was silent for forty years, and it doesn't work.  And maybe -- just maybe -- if enough straight allies will commit to standing in the breach with us, we won't have another generation of queer children growing up going through the hell that I and so many others did.