Islands in the sky

About fifteen years ago, I fulfilled a lifelong dream to go to Ecuador, a country I've been fascinated with since I was a kid.  I'm a fanatical birder, and that tiny country is home to no less than one-sixth of the world's nine-thousand-odd bird species, including over three hundred different kinds of hummingbirds.  (Where I live, in upstate New York, we have exactly one, and it's only here in the summer.)

It was when I was reading up on the hummingbirds in the Ecuadorian bird guide before leaving on the trip that I noticed something odd.  A number of the species had extremely narrow ranges.  A good example is the exquisite Violet-tailed Sylph (Aglaiocercus coelestis): 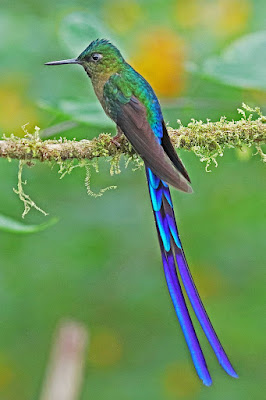 The Violet-tailed Sylph is only found in a narrow band a couple of kilometers wide on the Pacific slope of the Andes.  North-to-south, though, its range spans over sixteen hundred kilometers.  The reason for this bizarre geographical distribution is obvious if you consider the topography; the range of the Violet-tailed Sylph, and the majority of the other hummingbirds, is driven by altitude, so their ranges run in thin strips parallel to the Andes Mountains.  A lot of it has to do with food specialization; they're nectar-feeders, and many of them have bills shaped to fit only a single species of flower.  Many tropical plants are very temperature- and moisture-sensitive, and that depends strongly on altitude, so they have equally restricted ranges.  In the case of the lovely little Sylph, its food sources are mostly found in the cloud forests that run along the mid-slope of the Andes at an elevation of about a thousand meters.

The combination of phenomenal overall biodiversity with extremely narrow ranges that you find in Ecuador draws some parallels with the fascinating ecological model called island biogeography studied in the 1960s by Robert MacArthur and E. O. Wilson.  They were trying to find patterns to explain why some islands (such as Trinidad) have extensive and diverse ecosystems, and others (such as Tristan da Cunha) have very low diversity.  They found two factors that made the most difference; island size and the proximity of the island to the nearest mainland.

The dependence on island size is easy to see; the bigger the island, the more resources there are, and the greater the number of species it can support.  The proximity factor comes from the likelihood of immigration (defined as a new species arriving and becoming established); more distant islands are farther away from a source of new species.  The math gets a little complicated, but the basic gist is that islands end up in an equilibrium between immigration and extinction, and that equilibrium results in a predictably higher number of species on larger islands that are closer to the mainland.

Where this gets interesting is that the mathematical model even works for metaphorical islands -- marshes surrounded by desert, isolated springs and lakes, hydrothermal vents on the floor of the deep ocean, and -- as with our hummingbird -- narrow ecosystems in mountain ranges that are restricted by altitude.  In fact, it's this last one that got me thinking about this topic in the first place; last week, a really cool study by a team led by Martha Kandziora of Charles University (Prague) looked at diversity in African "sky islands," ecosystems high up on mountains that are defined by cold temperatures, low rainfall, and harsh sunlight.  The authors write:

Tropical alpine floras are renowned for high endemism, spectacular giant rosette plants testifying to convergent adaptation to harsh climates with nightly frosts, and recruitment dominated by long-distance dispersal from remote areas.  In contrast to the larger, more recent (late Miocene onward) and contiguous expanses of tropical alpine habitat in South America, the tropical alpine flora in Africa is extremely fragmented across small patches on distant mountains of variable age (Oligocene onward)...  Although some of the mountains are old... most lineages appear to have colonized the afroalpine during the last 5 or 10 My.  The accumulation of species increased exponentially toward the present.  Taken together with recent reports of extremely low intrapopulation genetic diversity and recent intermountain population divergence, this points to a young, unsaturated, and dynamic island scenario.  Habitat disturbance caused by the Pleistocene climate oscillations likely induced cycles of colonization, speciation, extinction, and recolonization.

One of the things driving the study is that these regions are seriously threatened by anthropogenic climate change.  While species like the Violet-tailed Sylph could potentially respond to warming trends by moving farther up-slope, the African sky islands have nowhere to go.  If the climate gets significantly hotter, the great likelihood is that these ecosystems with their unique and bizarre flora will simply disappear.

Tragic to think that we're losing biodiversity and in many cases only poorly understand what's being lost.  Perhaps these odd species with their extreme specialization and tiny ranges don't have much impact on our day-to-day lives, but without them, we would live in a sadly impoverished world.

Posted by Gordon Bonnet at 4:29 AM