Every once in a while I'll run across something and think, "Yeah, I remember hearing about that," but even after thinking about it, I can't bring back to mind much in the way of detail.  This happened just yesterday, when a friend of mine, who is a loyal reader and frequent contributor to Skeptophilia, sent me a link along with the message, "Take the bait, little mouse... take the bait."

Of course, I couldn't let something like that just sit there, so I clicked on the link.  Which is just what he intended.  And the link turned out to be about the Ten Lost Tribes of Israel.  And I thought, "Don't they have something to do with the Babylonian Captivity?  And Mormons?  Or something?"

So before I tell you what the link had to say -- which is truly stunning, and for which I should give you a while to prepare either your mind or else a strong drink -- let's look at what I found out when I did some research on the Ten Lost Tribes.

Apparently the idea is that of the twelve tribes of ancient Judea, ten of them were overrun by the Assyrians somewhere around 722 B.C.E. and deported, presumably because they had done something naughty in God's sight, which always seemed to be what kicked off these kinds of mass genocides.  In any case, the whole lot of them were killed or else sold off into slavery, and were never more seen or heard of.  Except that (1) a good many reputable historians seem to think that the whole thing is a myth, and (2) now everyone and his next-door-neighbor is claiming descent from them even though there seems to be no hard evidence of any of it.

So a great many people are of the opinion that the Ten Lost Tribes aren't really all that lost.  In fact, if you believe half of the tales out there, you'll come away with the impression that you can't swing a stick without hitting a Ten Lost Tribesman.

What may come as an even greater surprise, though, is that I haven't told you the wackiest theory on record about these Palestinian Hide-and-Seek World Champions.  Because the website that my friend sent me claims that the Ten Lost Tribes are actually...

And I don't mean underground, as in caverns or something.  I mean that the Earth is hollow, and the Ten Lost Tribes vanished because they found a big hole up at the North Pole and went down there and haven't come out since.  And they're not the only ones down there, either:

Well, with all of that inside the Earth, no wonder they stayed lost, although you have to question how nice it would be given the presence of Vikings and Nazis.  But maybe if everyone has been living for centuries in peace, prosperity, and health, there's no reason for the Vikings and Nazis to engage in rape, pillage, plunder, and mass executions any more.

I dunno.  But on the website there are all sorts of testimonials from people who claim to have been inside the Earth, so I took a look at the first one, which was written in the nineteenth century by one Willis Emerson, who was (he said) recording the narrative of an Olaf Jansen of Sweden.  Jansen claimed to have sailed north into the Arctic and ended up going down some kind of hole into an "inner land" inhabited by giant beautiful people who spoke "something like Sanskrit."  The whole thing sounded like Jules Verne on acid, so I can't say I was all that impressed.

We also have Phoebe Marie Holmes, who claims to have visited the Sun.  Yes, the real Sun, not the "inner sun" that the Hollow Earth people claim is where the Earth's core should be, along with the stars and galaxies and all: 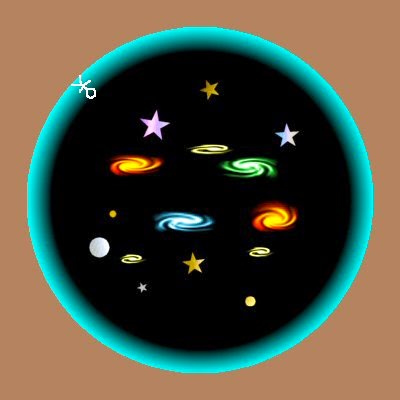 Note: diagram not to scale.
Holmes wrote all about it in a book called, unsurprisingly, My Visit to The Sun, in which she claims that the New Jerusalem is being built there for us by Jesus and all the Saints, in the interior of the Sun, because apparently it's hollow, too.

How she got there, being that the Sun is kind of hot and all, I'm not sure.  Perhaps she went at night.

In any case, the whole site reads like an Encyclopedia Wingnuttica, so I spent most of it torn between laughing and looking around for the footnote that said, "Ha ha.  This is a satire.  Gotcha."  But no, however bizarre it seems, these people are sincere.

What did sort of impress me, though, is that the header for the site says that the information contained therein qualifies as "WORLD TOP SECRET."  So secret, in fact, that you would never find it unless you Googled "World Top Secret Hollow Earth."

Or else had a friend who knows just how to bait you just right to get you to open a ridiculous link.