Sometimes it seems like the members of my family communicate with each other primarily via movie quotes.

In that way we're a little like the Tamarians from the Star Trek: The Next Generation episode "Darmok," except instead of using edifying legends, mythology, and folklore from our history and culture to explain ourselves, we use quotes from Monty Python, Doctor Who, Arrested Development, Miranda, The X Files, and Looney Tunes.

So, Shaka when the walls fell, I guess.

There's pretty much a quote for every occasion.  I can't hear an announcement in an airport without thinking (or often saying aloud), "Don't start that 'red zone/white zone' crap with me, Betty."  (From the movie Airplane, surely one of the most quotable movies ever made.)  If I fuck something up royally, my response is either "Missed it by... that much" (from Get Smart) or "Back to the old fiasco hatchery" (from the inimitable Wile E. Coyote).  If someone makes an egregious misstatement, there's always "That word... I don't think it means what you think it means."  (From, of course, The Princess Bride.)

This habit of making connections between real life and on-screen events also explains why there are times when I'll find something funny that no one else does.  This is why I burst out laughing when I read a new piece of research published in the journal PLOS ONE last week entitled, "Composition of Trace Residues from the Contents of 11th–12th Century Sphero-conical Vessels from Jerusalem," by a team led by Carney Matheson of Lakehead University.

From the title, you'd think that not only would there be nothing whatsoever funny about it, but that it'd be an article of interest only to people fascinated with obscure archaeological trivia.  But I suspect some of you will get why I thought it was funny when you hear what those "trace residues" were.

Yes, Monty Python fans, what we have here is clearly the Holy Hand Grenade of Antioch. 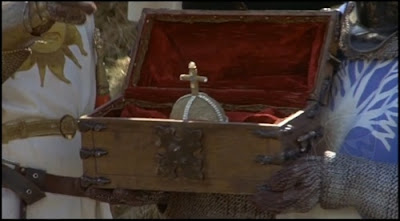 There is, unfortunately, no evidence that they were brought out in order to deal with a murderous fluffy bunny, nor that their use was preceded by monks chanting "pie Jesu domine, dona eis requiem" and a reading from the Book of Armaments ("And the Lord spake, saying, 'First shalt thou take out the Holy Pin, then shalt thou count to three.  No more, no less.  Three shall be the number thou shalt count, and the number of the counting shall be three.  Four shalt thou not count, neither count thou two, excepting that thou then proceedest on to three.  Five is right out.  Once the number three, being the third number, be reached, then lobbest thou thy Holy Hand Grenade of Antioch towards thy foe, who being naughty in my sight, shall snuff it.'")

I feel obliged to state up front that I mean no disrespect to Matheson et al., and I have the greatest regard for scholarly research, so any connections I'm making to Killer Rabbits and monks who wallop themselves over the heads with boards is purely a function of my rather loopy brain.  And I suppose it's only fair to show a photo of the actual artifact: 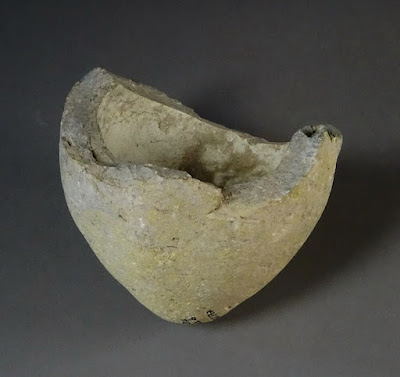 In my own defense, I'm sure you'll agree that this looks a great deal like what was left when King Arthur didst lob the Holy Hand Grenade of Antioch at the Beast of Caer Bannog and blew it to tiny bits.

So, there you go.  A post that's more about the workings of my bizarre neural connections than it is about the actual research.  I've been sitting here trying to think of a way to wrap this up, and I think it's only fitting to go with a quote from the Star Trek: The Next Generation episode "Ship in a Bottle," the last line of which is Lieutenant Barclay saying, "Computer: end program."