Out of the ashes

The eruption of Mount Vesuvius in 79 C. E. and its destruction of the cities of Pompeii and Herculaneum make for a story that is as fascinating as it is horrific.

Vesuvius is a stratovolcano, built up from layer after layer of hardened lava (the "strata" of the name).  Stratovolcanoes usually produce felsic lava -- high in silica content -- making the molten rock thick, viscous, and resistant to flowing.  The results are explosive eruptions, not the cascading rivers of lava you see in shield volcanoes such as Kilauea, which produce mafic lava that is low in silica and flows readily.

The eruption of a stratovolcano is catastrophic.  Unlike the Hawaiian shield volcanoes, which certainly can cause significant property damage but seldom loss of life, stratovolcanoes fling chunks of rock around, generate huge amounts of ash, and -- worst of all -- can create pyroclastic flows of superheated air that can move at a hundred kilometers per hour and incinerate everything in their path.  It was a pyroclastic flow from Mount Pelée that killed almost thirty thousand people in only a few minutes on the island of Martinique in 1902; one of three people in the city of Saint Pierre who are known to have survived only did because he was being held in an underground jail cell.

The combination of rock ejection, ash clouds, and pyroclastic flows are sometimes called Plinian eruptions after the Roman author Pliny the Elder, who died during the eruption of Vesuvius.  If you don't mind being a little freaked out by the power of nature, check out this ten-minute video simulation of the 79 C. E. eruption, from the perspective of a person in Pompeii:

The reason the topic comes up is because of a paper that appeared last week in Scientific Reports about some research done by a team led by Gabriele Scorrano of the University of Copenhagen.  Scorrano and his team found two human skeletons, one male and one female, that -- despite being covered by scorching-hot ash and then entombed for almost two thousand years -- contained enough intact DNA to analyze.
The man's, in fact, was complete enough to do a whole-genome analysis, including a Y DNA and mitochondrial DNA study.  The results were interesting, if not surprising; his DNA was similar to that of modern Italians from the region, although both his Y DNA and mtDNA showed markers most commonly found on the island of Sardinia.

So he likely had ancestry on both sides of his family from Sardinia.  He also, apparently, had tuberculosis.  The woman's skeleton, which contained only fragmentary DNA, showed signs of significant osteoarthritis.  Serena Viva of the University of Salento, who co-authored the study, said, "This could have been the reason for which they waited for it all to finish, maybe in the security of their home, compared to other victims who were fleeing and whose remains were found in open spaces." 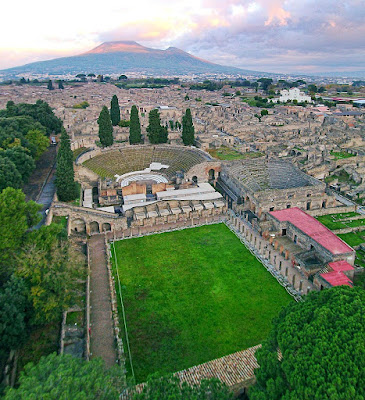 The ruins of Pompeii, with Vesuvius in the background [Image licensed under the Creative Commons ElfQrin, Theathres of Pompeii, CC BY-SA 4.0]

Scary stuff, that.  I have to say I'm glad I don't live in Naples; I wouldn't be able to sleep with Vesuvius looming over me, even though it's shown no signs of an imminent catastrophic eruption.  I actually thought the same thing when we were in the Pacific Northwest last week, not only because of nearby stratovolcanoes like Mount Rainier, but because the entire area is at risk of enormous earthquakes because of plate movement along the Cascadia Subduction Zone.

I know the risk during any given week is extremely low, but it did make me a bit nervous anyhow.  Sometimes a little knowledge can be a lot scary.