Maybe ten years ago I got in a protracted argument over the phone with a local man.  The subject was an online social media group he'd started, and which I initially had joined, that protested the privatization of nursing homes in our area.  The practice, the group description rightly said, has put appropriate health care for the elderly out of the reach of all but the wealthiest.

The call that evening was precipitated by the fact that I left the group.  Quietly -- I posted a quick note that the group was heading in a direction I wasn't comfortable with, and disconnected.  My reason for doing so was one member, who was (and is) stridently ultra-left, going so far as to ridicule and/or call evil anyone who didn't share his views.  The long screeds he posted were not only unpleasant, they were outside of the specific focus the group had been created to address, and as a result the group was devolving into a rant-filled political free-for-all.

The gentleman who started the group (I'll call him Steve) demanded to know what it was that I had disagreed with so vehemently that I felt the need to exit.  I was a well-known and well-respected figure, he said, a veteran teacher, and my leaving the group would be seen as a blow to its standing.

I told him that it wasn't about disagreement, it was about partisanship.  "I teach several classes which have political aspects," I said.  "If I'm seen as being publicly partisan, I will lose credibility with my students about being unbiased and open-minded."

"Don't you have opinions?" Steve shouted at me.

I sighed loudly enough that he heard me, and said, "Of course I have opinions.  But that's what they are: opinions.  I don't foist them off on my classes.  I present my students with facts, ideas, and critical thinking strategies, and let them come to their own conclusions."

"What if a kid asks you for your opinion on something like politics or religion?"

"I have one of two answers," I replied.  "If it's not germane to what we're discussing in class, I'll say so.  If it is, my usual response is, 'Why do you need to know my opinion?'  If the answer is simple curiosity, which it usually is, I just shake my head and tell them I'm not going there.  I steadfastly refuse to tell students what my religious views are and what political party I belong to.  Students are a captive audience.  It's way too easy for 'this is my opinion' to morph into 'and it should be yours, too.'"

By this time, Steve was so mad he was about to burst a blood vessel.  "But this isn't at school!  It's online!  You can't state your opinion to anyone?"

My own temper was fast rising, but I kept my voice level with an effort.  "I didn't say that.  What I'm saying is that I'm very careful.  Like it or not, I'm a public figure, and if I get involved in publicly-visible online partisan rants, it will damage my standing in the classroom."

He lost it.  "I can't believe someone as smart as you is just fine with private corporations taking over every fucking health care facility in the region!"

I snapped back, "I'm not fine with it.  I hate it.  For fuck's sake, my wife's a public health care nurse.  What the hell do you think my opinion is?"

That shut him up.  At least momentarily.

The bottom line, though, is that he never did get my point; students are required to be in school, so teachers have to be really cautious about how they use their position of power to maneuver students' opinions, even inadvertently.  Sometimes our beliefs can't help but be exposed; I never hesitated to confront racism, sexism, and homophobia in the classroom, for example.  But I always tried to be as careful as I could on most other topics.  Students look up to and trust teachers (well, most of them do most of the time), and if I used my authority to push my religious or political views, it would be a significant betrayal of that trust.

Which brings us to Monday's decision by the United States Supreme Court that a high school football coach praying with his athletes on the field was protected free speech. 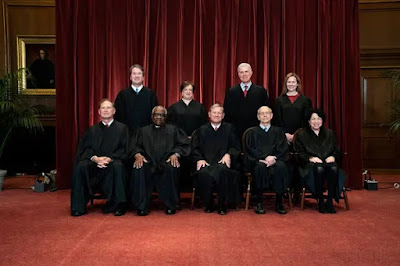 The decision, unsurprisingly, was 6-3 along ideological lines.  In the majority opinion, Justice Neil Gorsuch wrote, "We are aware of no historically-sound understanding of the Establishment Clause that begins to (make) it necessary for government to be hostile to religion in this way."

I'm no expert in law, but I do see that saying, "You can't pray with students at an event they're required to attend" is not equivalent to "hostility to religion."  Just like teachers in the classroom, coaches are looked up to by athletes.  Gorsuch said that "students were not required nor expected to participate [in the prayer]," which is disingenuous to say the very least.  Show me one high school athlete who, at a practice or a game, would be willing to say to a well-respected coach, "I'm not going to participate in this prayer, I'll just stand here to the side and let everyone watching stare at me.  Tell me when you're done."

But it also brings up the question of why having the coach lead a prayer is a good thing.  Despite Christian alarmists screeching about God not being allowed in schools, no one stops students from praying privately.  I knew a young man who always quietly recited the Grace Before Meals prayer before eating lunch, and I never saw anyone bat an eyelash.  (And I bet there are lots of prayers wafting aloft right before final exams.)  If students want to pray, they certainly can do so.  Why does a coach or a teacher need to cross that line into leading a prayer?

It also brings to mind a particularly inconvenient quote from Jesus himself, in the Gospel of Matthew, chapter six: "And when you pray, do not be like the hypocrites, for they love to pray standing in the synagogues and on the street corners to be seen by men.  I tell you the truth, they have received their reward in full.  But when you pray, go into your room, close the door and pray to your Father, who is unseen."

And as an aside, I wonder what the Supreme Court vote would have been if the coach had led the players in a prayer to Allah and asked them to bow toward Mecca.  Or any of the other hundreds of religious expressions of faith that are out there in the world.

What's most infuriating about this is the same basic thing I was arguing with Steve about; saying "doing this is inappropriate" doesn't mean "I'm anti (whatever the topic is)."  I am not anti-Christian; I have lots of Christian friends and mostly we get along just fine.  The frustration I have is with the subset of Christians who equate the secular society's insistence that Christianity not drive public policy with a desire to destroy Christianity itself.

I have no problem with someone saying "my faith requires me to do this."  I have a big problem with someone saying "my faith requires you to do this."  And that includes situations where the coercion is implicit, such as what school personnel say to young people.  Monday's decision should be deeply troubling to the religious and non-religious alike.  But given the current makeup of the court, I'm worried that we're only seeing the beginnings of an attempt to reestablish the hegemony of Christianity over the lives of all American citizens, irrespective of their own beliefs or lack thereof.