I think a lot of the problems I have come about because I've never really understood people.

Yes, I know, I am a people.  But that natural, seemingly effortless ability most folks seem to have, to look at an interaction and say, "Oh, here's why they did that," or better yet, to predict what's going to happen afterward -- I think I was born without that particular brain module.

So I've no doubt that many of my difficulties come from my own inherent inabilities.  It's like the hilarious opening scene of the Doctor Who episode "The Halloween Apocalypse," which finds the Thirteenth Doctor and her companion, Yaz, suspended upside down in mid-air by their ankles over a lake of boiling-hot acid: 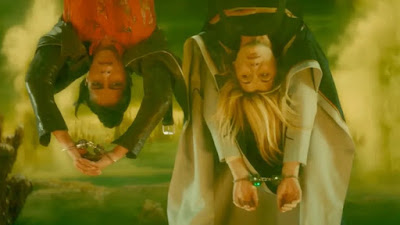 "You know, I can't help feeling that some of this might have been my fault."

Take, for example, the weird reaction someone had to a photograph I posted on Instagram a couple of days ago.  It was a selfie I took after going for a swim in my pond on a sweltering day.  I was happy, and my phone was right there on the dock, so I snapped a photo of myself and later that day, I posted it.

I think the problem was that in addition to some innocuous hashtags like #outdoors and #fingerlakesny, I tagged it #skinnydipping.  Our pond isn't visible from the road; unless you were actually standing in my back yard, the only way you could see it is from a low-flying aircraft.  So I never bother with swim trunks.  Not only do I prefer skinnydipping over getting out and having clammy wet fabric clinging to my skin, trunks would be another thing to wash, dry, and mess around with.  I figure it's not a problem, since the only ones who can see me when I'm swimming are my wife, who has seen me naked once or twice, and my dogs, who don't care because they also enjoy skinnydipping.

In any case, that prompted the following DM that evening, from someone who followed me but apparently doesn't any more:

I don't know why you have to post photos like the one you posted today.  Everyone is entitled to indulge in the lifestyle they want, but that doesn't mean the rest of us want to see it.  Posting nude selfies is offensive to a lot of us and it's just plain rude.  That's why we have laws about keeping your private parts covered.  So if you choose to post stuff like this, I choose not to follow you.

Now, before we go any further, here's the photo she objected to: 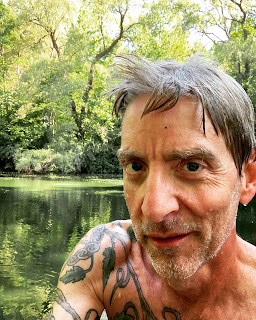 If you will examine this photo closely, you will see that there aren't any salacious body parts even close to showing.  If I had stopped before snapping the picture to put on my shorts, there'd be no way to tell.
For the record, I would never post an actual naked pic on Instagram, for two reasons: (1) it's against Instagram's Terms of Service; and (2) actual naked pics do offend people, because they're often construed (whether or not that was the person's intention) as an unwanted sexual advance, and knowing something will probably offend or upset people but doing it anyhow is synonymous with "being an asshole."
But what my ex-follower seems to be objecting to is implied nudity.  The rules of propriety, apparently, have to be applied even to what you can't see.  It reminds me of the joke the eminent biochemist, writer, and polymath Isaac Asimov used to tell to illustrate the meaning of the word prude:

A woman owns a house overlooking a river with a gravelly beach frequently used as a swimming spot, and one warm day she looks out of her window and sees some teenage boys skinnydipping, so she calls the police to complain.
The police come and give the boys a warning, telling them either to put on some swim trunks or else move farther up river and away from the woman's house.  The boys acquiesce and decide to find another spot.
An hour later, the police get another call from the woman complaining that the boys are still swimming in the river naked.
"They came back?" the policeman asks.
"No," the woman said, "but I can still see them if I lean out of my window and use binoculars."

It really does seem like there are a lot of people who look around for stuff to be offended by.  Maybe they like being offended, I dunno.  As I said, I'm flat-out mystified by people a lot of the time.

Just to be on the safe side, maybe from now on I should only post selfies that look like this: 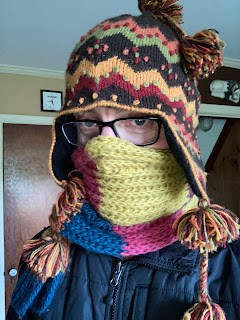 On the other hand, and I am loath to point this out: underneath all these clothes, I'm still naked.  You can't get away from implied nudity no matter how hard you try.

So anyhow.  My apologies to the people I've offended, and I'll be a lot more careful when I post photos, not only apropos of what you can see, but of the stuff you can't see but imagine you could if the camera was pointing in a different direction.

However, I still don't think I'll ever really understand what makes some people tick.