Interestingly, as that particular trend goes, during my last ten years of teaching, I had only a handful of Jennifers in my classes, and barely any Steves.  But I bumped into a more recent iteration of the same phenomenon with a photo of five handsome, affluent-looking white college guys, all smiles and tans and perfect hair.  The caption read, "Left to right: Hayden, Trayden, Kayden, Grayden, and Brayden."

In my own case, I was named after my father, but he was named by his mom, who allegedly said -- and having known her well, I can easily hear her saying it -- "He may be stuck with a French last name, but he damn sure is going to have a Scottish first name!"  Which is how I ended up with an odd amalgam that is still strangely fitting of my actual roots. 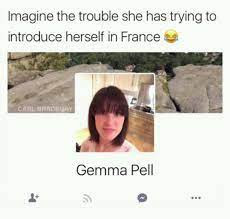 Things get even more complicated when you start throwing in other languages.

Names come and go, something that really became apparent when I started doing research into genealogy.  Various relatives and ancestors from my family tree include Ulysse, Anicet, Roxzella, Orsa, Laodice, Odressi, Donathilde, and Hiram.  A friend of mine, for whom I did some genealogical digging, descends from a guy named Onesimus Futch, which sounds like an insult.  ("How dare you, you onesimus futch!")

My wife's family is largely Eastern European Jewish, and she has Avish, Baruch, Gittel, Scholem, Chaia, Dvora, and Mordechai.  The really weird ones, though, are in my wife's non-Jewish ancestry, which hailed from England and goes back to the Anglo-Norman nobility.  She has an ancestor named, I kid you not, Marmaduke de Thweng.  Another was Johanna Ufflete.  But by far my favorite is Benedicta de Shelving, which would make a great name for the patron saint of interior decorators. 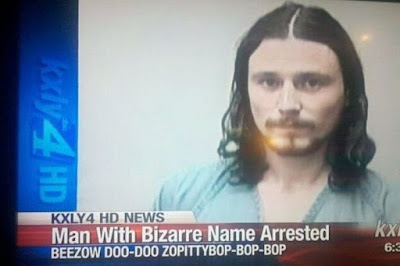 Always keep in mind that however strange your name is, it could be worse.

The topic comes up because of some recent research out of the University of Michigan which looked at naming trends both in children and in pets, and found that it could be modeled using a concept from evolutionary genetics called frequency-dependent selection.  The idea here is that the success of a specific phenotype -- and thus its trending toward becoming more or less common -- depends on how common it already is.  It can go either way; in positive frequency dependence, the trait has better success the more common it is.  (A good example is warning coloration, where a poisonous or venomous species advertises its presence with bright colors; the tactic only works if there are enough dangerous, brightly-colored individuals that predators learn to leave them alone.)  There's also negative frequency dependence, where the success of common phenotypes is poorer.  (An example is apostatic selection in a species of common British garden snails that have a variety of color patterns; studies showed that predators favored the more familiar-looking ones, so rare color patterns had a better survival rate.)

Naming trends tended to show a negative frequency dependence; when names become common, new parents (or new pet owners) tend to choose something more distinctive (or else spell it differently, which is why I had students named Michaela, Mikayla, Mikaela, Makayla, and Mekayla, fortunately not all in the same class).  Names become trendy for a while, but following the time-honored principle of "I want to be unique, just like everyone else," if the trend peaks too high, it goes into an equally precipitous fall.

"This is really a case study showing how boom-bust cycles by themselves can disfavor common types and promote diversity," said study co-author Mitchell Newberry.  "If people are always thirsting after the newest thing, then it's going to create a lot of new things.  Every time a new thing is created, it's promoted, and so more rare things rise to higher frequency and you have more diversity in the population."
Still, something that is too odd never does catch on.  I've seen the name Trasimond in nineteenth century Cajun French records, but I've never known one in real life, and that particular name seems to have always been a bit of an outlier.
You have to admit, though, that it's kind of euphonious.  Better than Onesimus Futch, anyhow, not to mention the unfortunate Mr. Zopittybop-Bop-Bop.  Given those as choices, I'll stick with Gordon.  I might even stick with Marmaduke de Thweng.  At least that one has a certain insouciance.