Talking to the animals

We just got back from a week-long trip to visit friends in Seattle, which meant boarding our two dogs with a local kennel.  We know and trust them -- we've used them for years -- and they love our dogs, quirks and all.  So we can leave them and be sure that they're in good hands.

Guinness, for the most part, has no problem with kenneling.  He knows he's going to get treats and play time, so for him it's kind of like sleep-away summer camp.  He jumps right into the car like it's going to be a great big adventure.

Cleo, on the other hand.

Our little Shiba Inu rescue was caged during much of her four years with an abusive breeder, and she has an absolute terror of being locked up.  She's relaxed considerably since we got her in December of 2021 -- especially once we installed a dog door so she can go in and out of our big fenced back yard whenever she wants -- but she still freaks out when the door closes behind her.  And she gets very, very wary when she knows we're going to pick her up and put her in the car (for example, on trips to the vet).  She's really snuggly and friendly if it's on her terms -- but if she knows she's going to be restrained, good freakin' luck. 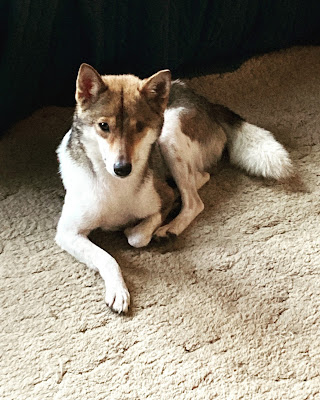 Cleo in a calm moment

So we've tried everything we can think of to (1) lower the stress surrounding the situation, and (2) make it easier to get her when we absolutely have to.  Bribing her with food barely works; she's the least food-motivated dog I've ever met.  Calm talk has zero effect.  And my wife pointed out to me that my tightly-wound personality comes through in my voice, that if I say in as friendly and non-threatening a manner as I can, "Hey, Cleo, c'm'ere!  Want some cheese?" she not only isn't gonna respond to the bribe, she knows that I'm up to something.

I've tried whatever I can, but I don't seem to be able to help having it show when I'm anxious about something, like when we have to drop the dogs off at the kennel by 9 AM, and it's 8:45, and we're chasing Cleo all around the back yard.  At first, I was a little reluctant to believe that Cleo is really that sensitive to subtleties in my tone of voice, but after a few frustrating hour-long battles to come closer to her than ten feet, I have to admit Carol's got a point.

And some research out of the University of Copenhagen that appeared last week in the journal BMC - Biology bears out her contention that domestic animals are way better at picking up on vocal tone than anyone thought.  It's an odd claim, when you think about it; why should domesticated animals -- even ones like dogs, who have been in association with humans for tens of thousands of years -- recognize human social signals?  Even between closely-related primate species, the same signal can mean entirely different things.  For example, smiling is a sign of friendliness amongst humans, but smiling to a chimp is basically baring the teeth, and is considered an indicator of aggression or fear.

But the research seems unequivocal.  And they weren't even working with dogs; they primarily worked with pigs and horses.  They even controlled for the possibility that animals might learn certain words and have associations (positive or negative) that come along with them, something that is certainly true of most dogs.  (Say "do you want to play fetch?" to Guinness and he immediately turns into the canine ping-pong ball.)  What the researchers did was to hire a trained actor and gave him various gibberish phrases, with the instruction to speak them in a variety of differing tones.  They then recorded the animals' reactions on a lot of benchmarks -- ear position, facial tension, pupil dilation, and so on.

The animals had no problem picking up on the actor's emotional tone.  "Our results show that these animals are affected by the emotions we charge our voices with when we speak to or are around them," said Elodie Briefer, who co-authored the study.  "They react more strongly -- generally faster -- when they are met with a negatively charged voice, compared to having a positively charged voice played to them first.  In certain situations, they even seem to mirror the emotion to which they are exposed."

So Carol, apparently, is spot-on about Cleo picking up the tension in my voice.  The open question is what I can do about it.  Even when I'm aware of it and trying to moderate it, it apparently comes through loud and clear.  At least this is the last time for a while that we're going to kennel them, she doesn't have any upcoming vet appointments, and maybe just time and trust-building will convince her that whatever happens, she's safe.