I find it fascinating how many important discoveries were made more or less by accident -- either because a researcher was looking for something and stumbled upon something else, or because (s)he was just playing around in the lab and noticed something cool.

Here are a few of my favorite examples:

Stuff like this is one good reason to support pure research.  The criticism "I don't see what possible application this can have" is best answered, "you don't see what possible application this can have yet."  We never lose by finding out more about the universe we live in.  My own opinion is that there's a benefit to knowing stuff even if it never does have a practical use; but even if you're a pure utilitarian, there's no question that putting money into pure research pays back far more than it costs.
This came to mind because of a cool study that appeared two weeks ago in the journal Physical Review Applied about what controls the speed of collapse of a row of dominoes. 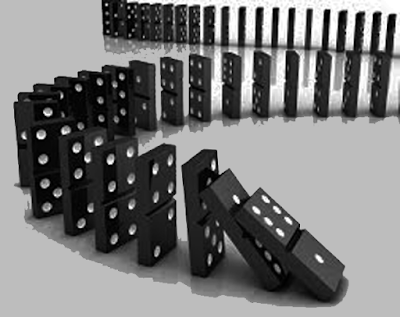 [Image licensed under the Creative Commons Nara Cute, Wallpaper kartu domino, CC BY-SA 4.0]
It's hard not to be fascinated by the phenomenon.  For example, take five minutes and watch this amazing record-setting collapse -- of thirty-two thousand dominoes:

Watching this is kind of mesmerizing, but it did bring up two things: (1) I would never have the patience to do this, and (2) if I did, knowing my luck, I'd be somewhere around domino #31,500 and my dog would come galumphing in, knock the whole thing down, and I'd have to start over.
The researchers into the domino collapse phenomenon found that the speed with which the row collapses is dependent upon two things -- the friction between the dominoes and the surface they're standing on, and the friction between one domino and the next one in line.  If you want the collapse to propagate quickly, you want a high coefficient of friction between the dominoes and the surface, but a low coefficient between the dominoes and each other.  The former means that there won't be much slip-back as the domino falls -- as it tips over, the bottom corner of the domino stays put, and the piece pivots around that fulcrum so that most of the energy of the fall is transmitted into the next domino in line.  The latter means that once a domino hits the next one, the slipping of the two surfaces across each other doesn't get "hung up" and lose energy from friction as the top corner of one domino slides across the surface of the next one.
The result lines up pretty well with common sense, but it's cool to have it confirmed experimentally, and that the researchers actually came up with a mathematical model that predicts the velocity of the collapse.
So, what use is it?  We don't know.  Maybe it could be used as a model of systems you don't want to collapse -- like buildings.  But one of the fantastic things about science is when a model in one area of study turns out to illuminate something completely different.  Maybe the mathematical principles of domino collapse rate could be applied to other phenomena that are caused by a phase transition -- a sudden change between one state and another, often caused by a tiny input of energy (like a finger pushing over a single domino).  There are a number of familiar phenomena that involve rapid phase transitions, including earthquakes, explosive volcanic eruptions, breakup of the ice sheet over a river during the spring thaw, and the firing of a neuron once the stimulus threshold is crossed.
Like I said earlier: the beauty of pure research is that we don't know what kind of applications it might have.  With the brilliant minds in the scientific community, you never know where it might lead.  One little paper on a curiosity of physics might trigger new research and go places you'd never expect.
You might even call it...
... the domino effect.