There's something compelling about a story with no definitive answers.  It's no wonder a lot of our favorite works of fiction have an element of mystery, and in some of them, the loose ends are never completely tied up.  Think of how many of our spooky Tales Around A Campfire end with a line like, "... and no one ever found out what happened to the missing teenagers."

In real life, though, unsolved mysteries have a way of inviting wild speculation, usually based on evidence for which even the word "slim" is an overstatement.  Consider, for example, the off-the-rails "explanations" people came up with to account for the fact that even powerful telescopes couldn't see any surface detail on the planet Venus.  Here's how Carl Sagan described one of these lines of thought, in the episode "Heaven and Hell" of his wonderful series Cosmos:

What got me thinking about this tendency is a curious story out of Cambodia that hit the news earlier this week.  On Koh Tang Island, in Preah Sihanouk Province, on July 12, a "ghost ship" ran aground -- no sign of the captain and crew, no markings indicating where the ship had originated.  Three lifejackets were found washed up on a nearby beach, but there are no bodies, nothing to indicate what happened to the ship and its passengers.  Stormy conditions have made further investigations impossible for the time being. 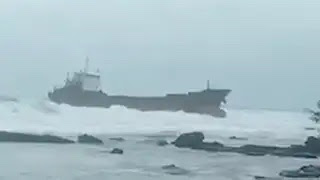 Immediate comparisons were made to the most famous of all "ghost ships," the Mary Celeste.  The Mary Celeste set sail from New York City on November 7, 1872, headed for Genoa, Italy.  Being in the days before shipboard radio, nothing more was heard from it until it was found drifting in the Azores a month later.  It was completely deserted.  The last entry in the ship's log was ten days earlier, and indicated nothing amiss.  It was amply provisioned with food, and none of the crew members' belongings were disturbed, as you'd expect if it had been captured and boarded by pirates.  There was no damage to the ship itself; it looked as if somehow, the captain and crew had simply... evaporated.
And to end the tale in appropriate campfire story fashion: no one ever found out what happened to the crew, and none of them was ever seen again.
The story of the Mary Celeste is certainly puzzling and creepy, but most rationalists still think there's a logical (and natural) explanation for what happened to it.  The same is true in the case of the Cambodian ghost ship.  Here, the most plausible answer is probably either that it was a ship that had been put out of service (the lack of markings and identifications suggests that the "service" might have been hauling illicit cargo, possibly drugs), and either had accidentally slipped its moorings and drifted off, or had been scuttled deliberately.
But just as with Carl Sagan's "I can't see anything = dinosaurs" example, the lack of anything definitive has touched off a lot of wild speculation about what happened to the ship.  Amongst the "explanations" I've seen:
Okay, just hang on a moment, here.
Let's stop and consider another quote, this one from astrophysicist Neil deGrasse Tyson: "Remember what the 'U' in 'UFO' stands for...  If something is 'unidentified,' then that's where the conversation should stop.  You don't go on and say 'so it must be' anything."  There's (at present) no real evidence for what happened to the ghost ship, so we should put any further speculation on hold for as long as need be.
And keep in mind that here, it's not even like most UFO sightings, which are one-offs that leave behind no traces and no chance of a repeat performance; the Cambodian authorities have the actual ship, meaning at some point when the conditions improve they'll be investigating further.  All we have to do is wait a while and see what they discover.  Chances are they'll find evidence that it's an illicit/unregistered cargo ship that was used in drug-running.  Which will send the aficionados of the Bermuda Triangle, Atlantis, and Cthulhu sulking off to their rooms...
... until the next mystery, at which point they'll all come roaring back.  Like they have every other time something odd happens.
It'd be nice if sometimes we could just let mysteries be mysteries.  Saying "we don't know, and might not ever know" isn't satisfying, but as good skeptics we have to be willing to say it when it's warranted.  I won't say that I'm not fascinated by cases like the Mary Celeste, where there really seems to be no plausible explanation, but intellectual honesty forces us to put aside our wild imaginings and accept that sometimes, there may never be a definitive answer.
****************************************