Friday's post, about alleged sightings of a Bigfoot-like creature in Kent, England, prompted a loyal reader of Skeptophilia to send me an email with a link captioned, "Don't forget us Aussies!"
The link was to an article at the site news.com.au, entitled, "'These Things Are Dangerous': Dean Harrison Claims Yowie Responsible For Missing People," wherein we find that the Australian version of Bigfoot -- the Yowie -- is not content with merely scaring the shit out of you, it actually is trying to kill you.
This should come as no surprise, because Australia has a well-deserved reputation for having dangerous wildlife.  Not only do they have six-meter-long saltwater crocodiles and abundant great white sharks, Australia is home to four of the top-ten deadliest snakes in the world (the Eastern Brown Snake, the Mainland Tiger Snake, the Coastal Taipan, and the Inland Taipan), the most venomous jellyfish known (the box jelly), and the most aggressive and dangerous bird in the world (the cassowary).  For fuck's sake, they even have a plant (the gympie-gympie) with hypodermic-needle-like hairs that inject a neurotoxin, resulting in excruciating pain that can last months.
"Don't forget about the Drop Bears," an Australian friend of mine told me.  "You visit Australia, you have to be constantly on the lookout for Drop Bears."
So I guess the Australian Bigfoots have to be pretty fierce just to fit in.
Harrison doesn't just collect Yowie sightings from other people, he's actually seen them himself.  On one occasion, he says, he barely escaped unscathed.  He was out for an evening run in the town of Ormeau, on the Queensland coast, and suddenly heard a terrifying noise.
"I heard all this crashing coming through the bush behind me and it sounded like a group of kids just trashing the place," Harrison said.  "The sound of snapping branches and crushing leaves started to get closer until a large figure emerged about ten meters behind me.  I got these unexplainable chills which are what we call the nameless dread … and like a rabbit in spotlights, basically, my whole body just locked up."
I dunno, "unexplainable" is not the word I'd use for being scared if a huge creature emerged from the underbrush near me at night.  Myself, I think it'd have been entirely explainable if he'd pissed his pants and then had a brain aneurysm.

"I didn’t know how I knew, but I knew I was in danger… and I knew that if I turned around and made direct eye contact, things would get exponentially worse." Harrison said.  So he broke into a sprint, and the creature started chasing him.  "He’s yelling and he’s roaring and he’s doing some sort of almost like a talk over the top and on every footstep … his diaphragm in his chest would bounce."  Which is pretty good detail to notice when you're running away from a giant proto-hominid at night.

"Before I knew it, he’s right next to me.  I thought, this is it, this is the end of my life.  I’m about to die right now."
Fortunately, though, he spotted a streetlight in the distance, and hauled ass toward it.  The Yowie for some reason decided not to pursue, and Harrison lived to squatch another day. 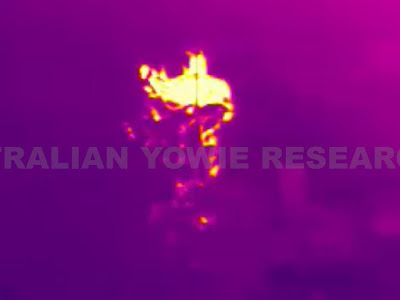 One of Harrison's infrared shots of a Yowie near Gold Coast, Queensland
The Yowie has a long history, and legends of encounters go back to Indigenous Australians far predating European colonization.  But the sightings persist, and Harrison says he gets a new report from somewhere in the country "every second day."
He's still waiting for unequivocal hard evidence, though (as are we all).  At least here we have a big country with a huge amount of wilderness and lots of places to hide.  So the idea of a significant population of some large mammal species living there and not leaving behind any traces is at least more plausible than the same thing existing in, say, southeastern England.
But the article concludes rather sadly that we still don't even have a clear photograph of a Yowie, and we'll have to keep looking.  It ends with an adjuration for Yowie-seekers not to confuse Yowies with the Bunyip, another bizarre denizen of the Outback.
Myself, I don't see how you could.  The Yowie is a three-ish meter tall apelike creature, while here's a 1935 illustration of the Bunyip, by Gerald Markham Lewis: 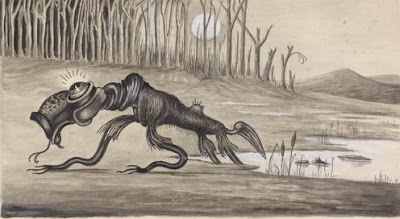