Today's story is more of a puzzlement than anything else.  It came to my attention thanks to a friend and loyal reader of Skeptophilia, who sent me a link to a site called What3Words with the message, "People will surely be making up conspiracy theories about the secret meaning of THESE words being attached to THAT place.  So I thought you might want to get the jump on them by making up your own."

What3Words turns out to be a "universal addressing system" that divides the entire world into 57 trillion three-meter-by-three-meter squares, and gives each of them a unique address made up of three random words.  My pond, for example (or at least one three-by-three bit of its surface) is extras.equine.outsmart.  As the "About" page explains it:

The world is poorly addressed. This is frustrating and costly in developed nations; and in developing nations this is life-threatening and growth limiting.

What3Words is a unique combination of just 3 words that identifies a 3m x 3m square, anywhere on the planet.

It’s far more accurate than a postal address and it’s much easier to remember, use and share than a set of coordinates.

Which may well be true, but still strikes me as kind of weird.  Why do we need that kind of accuracy? My pond, for example, is about eight meters by twelve meters in area.  So this means that just in my pond alone, there are on the order of ten different "addresses."  If I swim across the pond, I've moved from "extras.equine.outsmart" to "ranch.speculated.dressing."  So what does that gain me?  If I order a pizza, and the delivery person can't find me when I'm eight meters away, the pizza place needs to hire a new delivery person, not use a better addressing system.

I have to admit the map is fun to play with, though.  The assignment of the words seems random to me, although there may be a deeper structure there than I'm seeing.  The site explains:

Each What3Words language is powered by a wordlist of 25,000 – 40,000 dictionary words.  The wordlists go through multiple automated and human processes before being sorted by an algorithm that takes into account word length, distinctiveness, frequency, and ease of spelling and pronunciation.

Offensive words and homophones (sale & sail) have been removed.  Simpler, more common words are allocated to more populated areas and the longest words are used in 3 word addresses in unpopulated areas.

I'm a little disappointed at the removal of the offensive words, because that could create an opportunity for a great deal of barbed hilarity.  Just think, for example, if the headquarters of the Church of Scientology were located at "bloody.fucking.nonsense."

And it does offer more precision, especially in areas that lack ordinary street systems (the site says it's already being used by the postal system in Mongolia).  But here in the United States, I'm not sure what's to be gained, especially since (most) house numbering systems are pretty logical.  You'd expect that 101 South Street would be next to 103 South Street, and across the road from 102 South Street, and most of the time you'd be correct.

What3Words addresses, on the other hand, don't tell you much of anything.  Good luck figuring out what "huge.mutant.weasel" is next to, for example.  The nuclear power plant, probably. 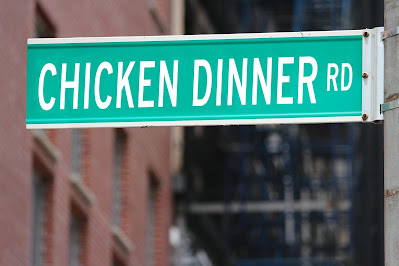 To be fair, some street addresses are equally bizarre.  Not far away from where I live there's a "Gravel Road."  It probably goes without saying that it's paved.
There's also the problem of minor misspellings making a huge difference.  As I mentioned, one bit of my pond, in Trumansburg, New York, is "extras.equine.outsmart."  On the other hand, "extra.equine.outsmart" is in Salem, South Dakota, and "extras.equine.outsmarted" is in southern Peru.  At least if you're trying to find 219 East Main Street, Trumansburg, New York, USA, you won't be off by six thousand kilometers.

And since there is no apparent rhyme or reason to the choice of words, I'm afraid my friend is quite right; it's only a matter of time before the conspiracy-minded start "discovering" their own meanings for What3Words addresses.  A search for the What3Words address "all.seeing.eye" came up with nothing, as did "new.world.order."  Most of the addresses I've seen are simply weird and random.  But there are bound to be some combinations that raise eyebrows, and believe me, someone is gonna find them.