Starfish are odd creatures in just about every respect.
They belong to a phylum called Echinodermata, which is Greek for "spiny skin" and also includes such weird animals as sea urchins, sand dollars, brittle stars, sea cucumbers, and crinoids (also called "sea lilies" or "stone lilies" because they look more like some kind of weird undersea plant than they do animals).  One of the big surprises for my AP Biology students, during the unit on zoology, was that echinoderms are our closest non-vertebrate relatives.  The old distinction of vertebrate versus invertebrate turns out to reflect less of a real genetic and evolutionary split than the distinction between protostome and deuterostome; the former includes insects, crustaceans, arachnids, mollusks, annelids (e.g. earthworms), and nematodes (roundworms), while the latter is just the echinoderms and vertebrates such as ourselves.
The names protostome and deuterostome, if you're curious, are also Greek; they mean (respectively) "first mouth" and "second mouth," referring to the order in which the openings of the digestive tract form.  In protostomes, when the beachball-shaped early embryo forms an inpocket that will lead to the formation of the gut, that first opening will eventually become the mouth; the anus forms when the inpocket tunnels its way through and comes out of the other side.  In deuterostome, it happens the other way around, but early embryologists evidently thought that "mouth second" sounded more genteel than "ass first," and that's how we ended up called "deuterostomes."  (I remember the shocked look on one of my students' faces when I told the class about this fun feature of embryonic development.  She said, wide-eyed, "So, at some point, all humans are just... a butthole?"  I deadpanned back, "Yup.  Unfortunately, some people never get past that stage.")
You might wonder how echinoderms can look so different from vertebrates if we're actually on the same branch of the animal family tree.  In fact, echinoderm larva are clearly bilaterally symmetric, just like vertebrates are; they largely lose that symmetry as they mature, although the apparent pentaradial symmetry of a starfish is kind of an illusion, because they do have organs (like the water intake organ, or sieve plate) that are offset to one side.  But they lose more than their symmetry; the adults have no true circulatory system (all they end up with is a set of what are essentially water pipes), no central nervous system (just a nerve ring and branched peripheral nerves), and the simplest of digestive tracts.  This despecialization seems to underlie their wild ability to regenerate lost or damaged limbs -- a capacity that has been under intensive study because of the possible applications to medical science. 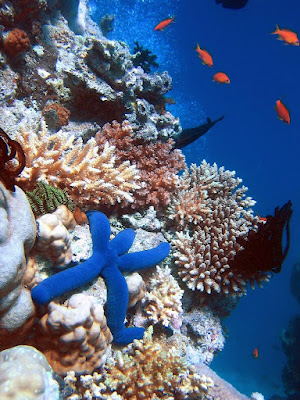 [Image licensed under the Creative Commons Copyright (c) 2004 Richard Ling, Blue Linckia Starfish, CC BY-SA 3.0]
The reason all this comes up is because of yet another bizarre and beautiful feature of starfish, just discovered at MIT.  When they're still very early in embryonic development, and resemble spherical glass beads, they exhibit a peculiar behavior -- they spin, creating tiny vortices in the water and drawing other nearby embryos in.  Eventually they self-assemble into a living crystal -- a regular, tightly-packed lattice of embryos all spinning in the same direction.  They undergo peculiar ripples that the researchers call "odd elasticity" -- odd because the oscillations aren't damped down by the water's drag, but continue to propagate through the entire crystal, like some sort of biological standing wave pattern.
"The spontaneous, long-lasting ripples may be the result of interactions between the individual embryos, which spin against each other like interlocking gears," said Alexander Mietke, who co-authored the paper on the phenomenon that appeared last week in Nature.  "With thousands of gears spinning in crystal formation, the many individual spins could set off a larger, collective motion across the entire structure." 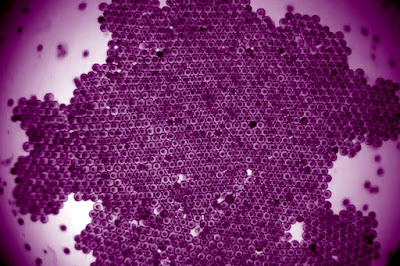 The benefit to this behavior isn't known.  One possibility is that the formation of these crystals makes it less likely that the embryos will be eaten by predators, but that's just speculation.  At the moment, though, it's enough to wonder at the intricacy and beauty of these odd creatures, our distant cousins on the evolutionary family tree.
****************************************