When people think of environmental degradation, usually what comes to mind are urban areas, agricultural land either grazed bare by cattle or sheep or devoted to monoculture farming, and obviously damaged sites like mines, oilfields, and landfills.  It's a little alarming when studies are done that show that an entire country is an example of a severely degraded environment.

Especially when the country is as big as Australia. 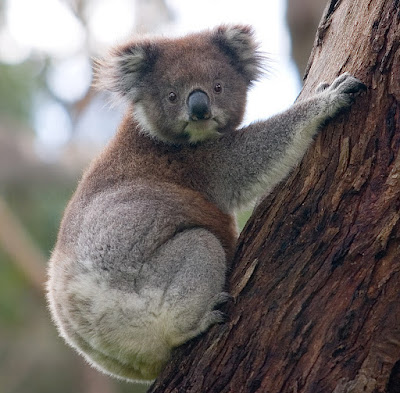 My guess is that Australia wouldn't be the first place you'd think of when it comes to ecological damage.  But a two-thousand-page state of the environment report, commissioned by the Australian government, resulted in an overall assessment that the condition of the country's ecosystems is "shocking."  Amongst the findings:

In a dramatic example of how environmental effects don't stop at national borders, a large contributor to the problem has been climate change -- even though Australia's government has committed to cutting carbon emissions by 43% by the year 2030.  Which is lovely, but when there are countries like the United States still thumbing their noses at decreasing fossil fuel use, it's not going to make much difference.

Not that the Australians themselves have done everything right, mind you.  Many of the exotic species -- most notoriously, the European rabbit -- were brought in deliberately.  Previous governments have been much less eco-friendly than the current one, usually citing budget issues as an excuse not to do anything.

It reminds me of a discussion I had with one of my environmental science students years ago.  The question I threw out to the class was, "What would it take for governments to take action on environmental issues, specifically carbon emissions and climate change?"  Her answer was, "Things will have to get a great deal worse.  Bad enough that ordinary people have their lives drastically changed.  When the food starts running out, when the heat starts killing not just poor people in third world countries but middle-class folks right here in the United States.  I hate to put it this way, but until it's bad enough that people living right in our neighborhoods are dying because of it, we'll just keep on doing what we've always done and pretending everything's okay."

I think she's spot-on.  The problem is, once it gets to that point, it's too late to do anything to halt it.  As the Australians have found out, as the Americans and Western Europeans are finding out, once entire countries are sweltering in a pressure cooker, there's not much you can do other than try to survive it -- and accept that some won't.

Of course, developing countries and the third world has known that for decades.  Right now, Pakistan, India, and large parts of central and northern Africa are experiencing record high temperatures as well.  Unlike the United States and Western Europe, though, this is nothing new.  It seems like every year they have a new record-setting heat wave, people die, and it barely is a blip on the radar in the industrialized world.

Yet another reason why we think we're immune to the effects of what we've been doing to the climate for the past hundred years.

It's profoundly maddening when you think about the fact that scientists and environmentally-conscious laypeople like myself have been sounding the alarm about this for decades.  I'd like to hope that this new report out of Australia will shake a few people up, but our history of ignoring the experts leaves me feeling like this will get shoved under the rug, too.

Remember the character of Cassandra from Greek mythology?  She was the daughter of King Priam and Queen Hecuba of Troy, and was given a blessing and a curse by the god Apollo -- that she could see the future, but when she told people about it, no one would believe her.  Even after Troy was sacked and burned, and her parents killed -- just as she'd predicted -- still people discounted what she said.  The environmental scientists are like modern-day Cassandras, telling people what the models said would happen, and even after the models have proved correct over and over (in fact, when they were wrong, it was usually because they underestimated the effects), people still shrug their shoulders and pretend nothing's wrong.

I'd like to find a positive way to end this post, but I'm fresh out of ideas about how to do that.  The situation is dire.  Our only hope -- slim as it is -- is to elect politicians who place the global environment in first place on the priorities list.  Until we do that, I'm afraid the Cassandras will continue their fruitless prophesying, and the rest of us will continue our slide into the pressure cooker.