One of the most interesting, and persistent, misconceptions about evolutionary biology revolves around the use of the word "primitive" to describe certain life forms.

The misunderstanding goes back to Aristotle, really.  The great philosopher proposed a concept usually known by its Latin name of scala naturae, the "scale of nature."  Often called "the great chain of being."  The idea is that life has progressed up some sort of ladder of complexity, starting with something like bacteria, then upwards through jellyfish and worms and bugs and fish and amphibians and reptiles and "lower" mammals, finally arriving at us, who (of course) being the pinnacle of creation, stand proudly at the top of the ladder.

The problem with this, as with many misconceptions, is that in some ways it's kinda sorta almost true.  Something like today's bacteria were the first life forms, and the progression of fish > amphibian > reptile > mammal is pretty well established.  The problems start when you look at life forms earlier than fish; during the famous Cambrian Explosion, most of the phyla of animals branched off and diversified in a relative flash, not only including the ones we have around today but a number of oddball groups that didn't survive.  So with respect to most modern groups of species, that smooth progression up the ladder didn't actually happen.

The problem gets worse when you try to apply the word "primitive" to current life forms.  Is a bug more primitive than a human?  Both are alive right now; each of them has exactly the same length of ancestral history.  It doesn't even work if you link "primitiveness" with "complexity."  Humans and bugs are both complex organisms, they're just complex in different ways.  Certainly, there's a difference in intelligence; most humans are smarter than most bugs.  But intelligence doesn't equal evolutionary success.  By just about any measure, insects are by far the most successful animals on the Earth.

It recalls the famous anecdote about the illustrious biologist J. B. S. Haldane.  Haldane was a zoologist but also rather notorious as an outspoken atheist, and religious people used to go to his talks to heckle him about it.  At one, during the question-and-answer period, a woman asked, "Professor Haldane, what have your studies in biology told you about the nature of God?"

Haldane thought for a moment, and finally said, "All I can say, ma'am, is that he must have an inordinate fondness for beetles."

In any case, you have to be extraordinarily careful how you apply the word "primitive."  In biology it's now used to describe traits (not entire organisms), with a very specific, restricted meaning, defined as "a trait that is shared with the ancestral form."  An example is the vascular tissue -- the internal plumbing -- in plants, which is "advanced" as compared to the trait of "lacking vascular tissue."  Vascular plants evolved from non-vascular ones, so apropos of that trait, mosses (which lack vascular tissue) are primitive as compared to ferns (which have vascular tissue).

But it still requires caution, because it's all too easy to assume that "primitive traits are less complex" or (worse) that "if an organism is like humans, that means it's advanced," neither of which are true.  For example, take a look at the paper last week in The American Naturalist written by a team from the University of Washington that questions the notion of primitiveness with respect to something most of us take for granted -- reproduction in mammals.

There are three basic modes of reproduction in Class Mammalia.  A couple of modern species are oviparous -- egg-laying (the monotremes, namely the echidna and the platypus).  Another group are marsupials, which give birth to extremely altricial (undeveloped) young, because the mothers have no placentas to interface between themselves and their babies.  Once the offspring are too big (which isn't very big at all; kangaroos are about two centimeters long at birth) they are born, and develop the rest of the way in the mother's pouch.  The third are the placentals such as ourselves (and every mammal you've ever heard of other than the monotremes and marsupials).

Egg-laying certainly is a primitive trait; it's pretty clear that the reptilian ancestors of the earliest mammals were oviparous.  But what about the presence of a placenta?  Once again, the danger is in assuming that it's the "advanced trait" because (1) humans are placentals, (2) there are currently more placentals than marsupials, and (3) somehow the placental method "seems more complicated."  These are all more like smug self-congratulation than they are science, and none are reliable indicators of the primitiveness of a trait.

The current study, in fact, suggests that the placental mode of reproduction may predate the marsupial method -- by a lot.  The researchers studied the odd multituberculates, a group of mammals that were amongst the first to diversify significantly, way back in the Jurassic Period around 170 million years ago.  They were some of the most common mammals for a very long time, finally going extinct about 35 million years ago (for reasons unknown). 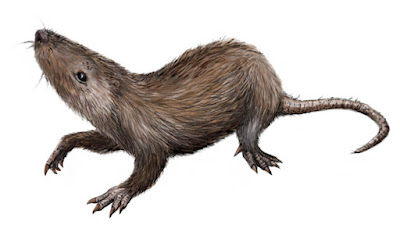 The salient point here is that the marsupial mammals, including the extinct ones that have been studied, have a very distinctive pattern of bone growth that is connected to their being born so incredibly undeveloped.  A careful analysis of multituberculate bones shows they're a great deal more similar to today's placentals -- despite the fact that they branched off from the rest of Class Mammalia way earlier than the marsupials did.

So it looks like the little multituberculates had placentas and long gestation periods, and our mode of reproduction is actually the primitive one.  Meaning the marsupial lineage lost the ability to form a placenta, rather than our lineage gaining it.  Why that happened isn't known; but as we've seen, a trait doesn't need to be complex to give its owner a selective advantage.  Perhaps in marsupials, the draw on the mother's resources is lowered enough by giving birth early that it allows her a better shot at surviving -- but that's pure speculation.

Whatever it is, both modes function perfectly well.  "Evolution," as biologist Richard Dawkins put it, "is the law of 'whatever works.'"

And it all reinforces the notion that there is no "great chain of being," there's just an enormous tangled web of which we are just a single strand.