Seeing through the fog

If it seems like we're seeing things as they actually are, right now, it's only because (1) the speed of light is so fast, and (2) most of the objects we look at and interact with are relatively close by.  Even the Sun, though, which in astronomical terms is right on top of us, is eight light-minutes away, meaning that the light leaving its surface takes eight minutes to cross the 150 million kilometers between it and us.  If the Sun were suddenly to go dark -- not, mind you, a very likely occurrence -- we would have no way of knowing it for eight minutes.

The farther out you go, the worse it gets.  The nearest star to the Solar System, Proxima Centauri, is about 4.2 light years away.  So the awe-inspiring panorama of stars in a clear night sky is a snapshot of the past.  Some of the stars you're looking at (especially the red supergiants like Antares and Betelgeuse) might actually already have gone supernova, and that information simply hasn't gotten here yet.  None of the stars we see are in exactly the same positions relative to us as they appear to be to us right now.

Worst of all is when you look way out, as the James Webb Space Telescope is currently doing, because then, you have to account not only for distance, but for the fact that the universe is expanding.  And it hasn't expanded at a uniform rate.  Current models support the inflationary model, which says that between 10^-36 and 10^-32 seconds after the Big Bang the universe expanded by a factor of around 10^26.  This seems like a crazy conjecture, but it immediately solves two perplexing problems in observational astronomy. 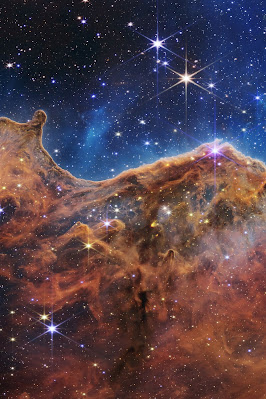 The Carina Nebula, as photographed by the James Webb Space Telescope [Image is in the Public Domain courtesy of NASA/JPL]

The first one, the horizon problem, has to do with the homogeneity of space.  Look as far out into space as you can in one direction, then do the same thing in the opposite direction, and what you'll see is essentially the same -- the same distribution of matter and energy.  The difficulty is that those two points are causally disconnected; they're far enough apart that light hasn't had time to travel from one to the other, and therefore no mechanism of communication can exist between them.  By our current understanding of information transfer, once causally disconnected, always causally disconnected.  So if something set the initial conditions in point A, how did point B end up with identical conditions if they've never been in contact with each other?  It seems like a ridiculous coincidence.

The other one is the flatness problem, which has to do with the geometry of space-time.  This subject gets complicated fast, and I'm a layperson myself, but as far as I understand it, the gist is this.  The presence of matter warps the fabric of space locally (as per the General Theory of Relativity), but what is its overall geometry?  From studies of such phenomenal as the cosmic microwave background radiation, it seems like the basic geometry of the universe as a whole is perfectly flat.  Once again, there seems to be no particular reason to expect that could occur by accident.

Both these problems are taken care of simultaneously by the inflationary model.  The horizon problem disappears if you assume that in the first tiny fraction of a second after the Big Bang, the entire universe was small enough to be causally connected, but during inflation the space itself expanded so fast that it carried pieces of it away faster than light can travel.  (This is not forbidden by the Theories of Relativity; matter and energy can't exceed the speed of light, but space-time itself is under no such stricture.)  The flatness problem is solved because the inflationary stretching smoothed out any wrinkles and folds that were in space-time at the moment of the Big Bang, just as taking a bunched-up bedsheet and pulling on all four corners flattens it out.

All of this will be facing some serious tests over the next few years as we get better and better at looking out into the far reaches.  Just last week a team at the University of Cambridge published a paper in Nature Astronomy about a new technique to look out so far that what you're seeing is only 378,000 years after the Big Bang.  (I know that may seem like a long time, but it's only 0.003% of the current age of the universe.)  The problem is that prior to this, the universe was filled with a fog of glowing hydrogen atoms, so it was close to opaque.  The new technique involves filtering out the "white noise" from the hydrogen haze, much the way as you can still see the shadows and contours of the landscape on a foggy day.  It's not going to be easy; the signal emitted by the actual objects that were there in the early universe is estimated to be a hundred thousand times weaker than the interference from the glowing fog.

It's mind-blowing.  I've been learning about this stuff for years, but I'm still boggled by it.  If I think about it too hard I'm a little like the poor woman in a video with science vlogger Hank Green, who is trying to wrap her brain around the idea that anywhere you look, if you go out far enough, you're seeing the same point in space (i.e. all spots currently 13.8 billion light years from us were condensed into a single location at the moment of the Big Bang), and seems to be about to have a nervous breakdown from the implications.  (Hat tip to my friend, the amazing author Robert Chazz Chute, for throwing the video my way.)

So think about all this next time you're looking up into a clear night sky.  It's not a bad thing to be reminded periodically how small we are.  The universe is a grand, beautiful, amazing, weird place, and how fortunate we are to be living in at time where we are finally beginning to understand how it works.