Setting the gears in motion

A couple of weeks ago, I was out for a run on a local trail, and I almost stepped on a snake.

Fortunately, here in upstate New York, we don't have any poisonous snakes.  Unlike in my home state of Louisiana, where going for a trail run is taking your life into your hands.  It was just a garter snake, common and completely harmless, but it startled the hell out of me even though I like snakes.  What's interesting, though, is that in mid-stride I did a sudden course correction without even being consciously aware of it, put my foot down well to the snake's left (fortunately for it), and kept going with barely a stumble.  I was another three paces ahead when my conscious brain caught up and said, "Holy shit, I almost stepped on a snake!"

Thanks for the lightning-fast assessment of the situation, conscious brain.

It's kind of amazing how fast we can do these sorts of adjustments, and some recent research at the University of Michigan suggests that we do them better while running -- and more interesting still, we get better at it the faster we run.

Running apparently triggers a rapid interchange of information between the right and left sides of the brain.  It makes sense; when you run, the two sides of your body (and thus the two sides of your brain) have to coordinate precisely.  Or at least they have to if you're trying to run well.  I've seen runners who look like they're being controlled by a team of aliens who only recently learned how the human body works, and still aren't very good at it.  "Okay, move left leg forward... and move the right arm back at the same time!... No, I mean forward!  Okay, now right leg backward... um... wait..."  *crash*  "Dammit, get him up off the ground and try it again, and do it right this time!"

But to run efficiently requires that you coordinate the entire body, and do it fast.  (In fact, a 2014 study found that a proper arm swing rhythm during running creates a measurable improvement in efficiency.)  The University of Michigan study that was published this week identified a particular kind of neural cross-talk between the two brain hemispheres when you run.  They call these patterns "splines" (because they look like the interlocking teeth of a gear wheel) and found that the faster you run, the more intense the splines get. 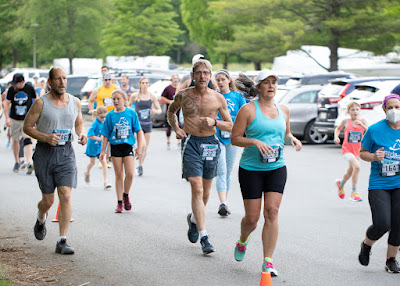 Me and some other folks at a race last month, splining like hell
"These spline brain rhythms are faster than all other healthy, awake brain rhythms," said Megha Ghosh, who co-authored the paper.  "Splines also get stronger and even more precise when running faster.  This is likely to help the left brain and right brain compute more cohesively and rapidly when an animal is moving faster and needs to make faster decisions."
More fascinating still is that the researchers found spline rhythms during one other activity: dreaming during the REM (rapid eye movement) stage of sleep.  So this could be yet another function of dreams -- rehearsing the coordinating rhythms between the two brain hemispheres, so that the pathways are well established when you need them while you're awake.
"Surprisingly, this back-and-forth communication is even stronger during dream-like sleep than it is when animals are awake and running," Ahmed said.  "This means that splines play a critical role in coordinating information during sleep, perhaps helping to solidify awake experiences into enhanced long-term memories during this dream-like state."
So that's the latest news from the intersection of two of my obsessions, neuroscience and running.  It'll give me something to think about in a few minutes when I go out for my morning run.  Maybe it'll distract me from obsessively scanning the trail for snakes.