The Beast of Sevenoaks

It's been a while since we've looked at anything of a cryptozoological nature here at Skeptophilia, so I'd like to rectify that with a story from an unexpected location.  Most of the Bigfoot sightings come from two areas -- the remote regions of the United States (particularly the Pacific Northwest), and the Himalayas.  This time, though we've got a report of a sighting in southeastern England.  The Brits, who evidently did not wish to be outdone by either the Nepalese or a bunch of upstart Americans, are claiming their own Bigfoot-clone, according to a recent article by Brent Swancer at Mysterious Universe.
Nicknamed "The Beast of Tunbridge Wells" or "The Beast of Sevenoaks," this cryptid is described as an eight-foot-tall creature, human-shaped but covered with hair, with "long arms" and "demonic red eyes."  Some locals are afraid to go outside at night because there have been so many sightings in the past six months.  There are a number of highly entertaining eyewitness accounts in Swancer's article, and I encourage you to read the whole thing.  Indeed, the story claims that the Beast has been seen for more than a hundred and fifty years, and include an excerpt from a local newspaper describing a sighting that occurred in 1858.  More recent ones come from such credible witnesses as "an elderly lady" and someone "known only as J. Smith of Sevenoaks."

Well, far be it from me to doubt anecdotal reports from J. Smith of Sevenoaks, but I feel obligated at this point to mention that my personal trainer, Kevin, actually grew up in Sevenoaks, so I asked him what he thought about the possibility of there being Bigfoots in that part of the world.
Here is, in as near as I can get to a direct quote, what Kevin said:

If there are Bigfoots all over the fucking place, why hasn't anyone gotten a good photo?  Here we are, all carrying around the equivalent of a thousand-dollar point-and-shoot camera in our pockets, and the photos we get are still crap.  And another thing is, you have to look at where the people from Monster Hunters and Finding Bigfoot always go.  It's places like the Appalachians, right?  Notice that this is also moonshine country.  Give me enough to drink, I'll not only see Bigfoot, I'll see the Queen, the Pope, and Jesus.  So if there were Bigfoots in a densely-populated place like Kent, someone would have gotten a good photo by now.  And I can tell you that growing up there, I saw lots of drunk people, but I never once saw Bigfoot.

Hmm.  Let's take a look at the circumstances during which J. Smith saw Bigfoot, as described in Swancer's article: "The witness... claims that he had gone out to a pub with some friends, after which they had gone off to chat and a BBQ..."
Well, alrighty, then.
But of course, mere scoffing isn't enough, however often I engage in it myself.  So let's interject a bit of a science lesson that may raise some questions in your mind. 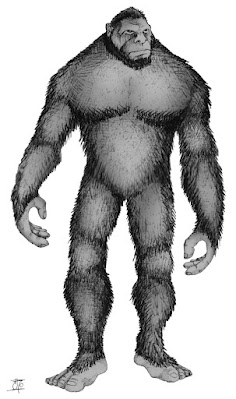 There's a concept in ecology called "minimum viable population."  This is the number of organisms needed in a population to assure that (assuming nothing changes) the birth rate equals or exceeds the death rate.  It is quite difficult to estimate, and depends on a great many factors, including the number of offspring per mating, mortality in the young, dependency on available resources, size of the territory, and so on.  To give two extreme examples that will illustrate this: the MVP for mosquitoes is probably pretty damn close to two, as long as one was male and one was female, and they were near enough to find each other and had a source of food and water.  Mosquitoes can produce so many young from one mating that it's likely you could rebuild a sizable population in short order from those two survivors.  Elephants, on the other hand, reproduce very slowly, and the young are slow to reach sexual maturity; in order to have a population large enough for the birth rate to equal or exceed the death rate (from natural causes, predators, poaching, and so on), you would need hundreds, perhaps thousands, of individuals in the population.

Get it?  Now, let's consider how many Britsquatches we'd need to have a viable, sustainable population.

To get a handle on this, I referred to the paper "Estimates of Minimum Viable Population Sizes for Vertebrates and Factors Influencing Those Estimates," by David Reed, Julian O'Grady, Barry Brook, Jonathan Ballou, and Richard Frankham, which appeared in the Journal of Biological Conservation in 2003.  The paper is lucidly written but relies on some rather specialized models and technical mathematics; if you want to give it a go, you can access it here.  The main thing of interest for our purposes is in the Appendix, wherein Reed et al. use their techniques to make an upper and lower bound estimate for MVP; the lower bound is just using raw birth and death rates, the upper bound generated from a mathematical formula that estimates the number of individuals required to give a 99% likelihood of the population sustaining for forty generations.  Interestingly, there is a large primate species listed -- the Mountain Gorilla (Gorilla gorilla beringei).  And Reed et al. place the lower bound for MVP for the Mountain Gorilla at 849, and the upper bound at somewhat over 11,000 individuals.

So assuming the Sevenoaks Britsquatch (Sasquatchius anglicus kentei) has a similar MVP, and has been wandering about the highways and byways of southeastern England since time immemorial (or at least since 1858), you can't just claim that there are two, or four, or even a dozen of them... you have to believe that there are thousands.

Maybe someone can explain how there could be a thousand (or more) eight-foot-tall hairy hominids hiding out down there southeast of London, doing all the things animals do -- feeding (and an animal that size would need a lot of food), making noise, sleeping, mating, dying, and so on -- and they've only been seen a handful of times near Sevenoaks, have left behind zero actual evidence, and no one has gotten a photograph.  That such a thing could happen in the trackless woods of the Pacific Northwest, or the icy reaches of the Himalayas, I might be able to believe.