The fall of the Guidestones

Ten years ago I wrote a piece here at Skeptophilia about the mysterious Georgia Guidestones, a granite monument that since 1980 has stood on a hill in Elbert County, Georgia.  People have called it "America's Stonehenge," which in my opinion gives it more gravitas than it deserves.  It's got a set of ten inscriptions that seem to fall into two categories: (1) not bad ideas but impossible to achieve (such as "Unite humanity with a living new language") and (2) vague pronouncements that seem to be attempting profundity but don't quite get there (such as "Prize truth -- beauty -- love -- seeking harmony with the infinite").

The building of the monument was funded by one "R. C. Christian," almost certainly a pseudonym.  But a pseudonym for whom?  No one knows for sure, but there's some speculation it it's either Ted Turner or a white supremacist doctor from Fort Dodge, Iowa named Herbert Kirsten.  The mystery adds to the site's appeal, and it became quite a tourist attraction, attracting thousands of visitors per year.

Unfortunately, it also attracted the attention of conspiracy theorists and evangelical wingnuts, who promptly proclaimed it as (respectively) an icon of the Evil New World Order and a manifesto from Satan himself.  Both of these impressions were enhanced by one of the inscriptions, which recommends keeping the human population at five hundred million "in perpetual balance with nature," a move that would probably be highly unpopular with the other seven billion humans on the planet.

This is how it came to the attention of one Kandiss Taylor, unsuccessful candidate for governor of Georgia, whose motto "Jesus Guns Babies" made her the target of hundreds of posts on social media such as the following: 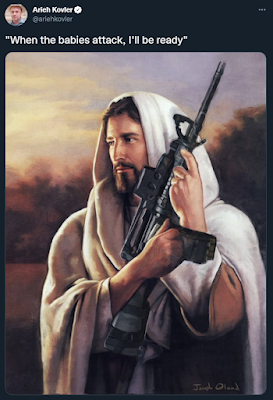 She was also brutally lampooned by the inimitable John Oliver in one of the funniest segments he's ever done.  You should take seventeen minutes right now to watch this, but do not, I repeat, do not attempt to drink anything while doing so.  You have been warned.
Anyhow, Taylor, who apparently gets most of her exercise doing sit-ups underneath parked cars, said that the Guidestones are satanic in origin, and that if she became governor, her first action would be to have them destroyed.  She received immediate support from loony Georgia Representative Marjorie Taylor Greene, because of course she did, who said that the Guidestones "revealed a world genocide plot," if you can apply the word "plot" to a message engraved in enormous letters on a giant rock on top of a hill outside of Atlanta.
But all of this is just a lead-up to what happened this week.  On Wednesday, an unknown person blew up one of the Guidestones and did enough damage to the others that they had to be demolished.  A car was captured on surveillance footage leaving the scene right after the bomb went off, but so far, no suspects have been identified.
This, of course, prompted conspiracy types to stop chewing on the straps of their straitjackets long enough to engage in some triumphant, and long-overdue, "I told you so"s.  Kandiss Taylor tweeted, "God is God all by Himself. He can do ANYTHING He wants to do.  That includes striking down Satanic Guidestones."
Apparently, though, sometimes The Almighty needs help from a random wacko with dynamite and some county workers with bulldozers, and "ANYTHING" doesn't include putting Kandiss Taylor in office, given that she lost the Republican gubernatorial primary to Brian Kemp after receiving only 3.4% of the popular vote.  Even with that poor showing, however, Taylor has refused to concede, claiming that she actually won but was cheated out of the election by voter fraud.
Because of course she did.

After reading all this, I've come to the conclusion that one of the two following conclusions has to be true:

What's most striking about the Guidestones, though, is that things in this country are crazy enough that a story which can be summarized as "Unknown bomber destroys weird monument that far-right nutcake politician thinks is a message from Satan" hardly creates a blip on the radar.  Are things this bad elsewhere?  Or is my assessment correct, that somehow the United States has cornered the market on whackjobbery?  It's getting to the point that I'm concerned my readers from other countries are judging me just because I'm American.  I'm going to be taking a trip out of the country next month, and I'm wondering what I should tell people.

Maybe I could pass for Canadian.  Although I wonder if I have the capacity for sustaining that level of niceness.  I suspect I'd tolerate stuff for a while, then something would make me say, "Are you fucking kidding me right now?", and the people nearby would slowly turn to stare at me, in the fashion of the pod people in Invasion of the Body Snatchers, but instead of pointing and shrieking, they'd point and yell, "AMERICAN!!!!!"

Anyhow, if option one was correct, I'd like the aliens just to give it a rest for a while.  I'm not sure how much more of this I can take.  Maybe I'm looking at the past through rose-colored glasses, and things have always been this weird, but even so, I'm undergoing lunacy fatigue.  So let's just have some normal news, of the kind Walter Cronkite used to deliver, for the next few weeks.  Thanks ever so.