The scent of memory

There are two very specific scents that will always remind me of my beloved grandma, with whom I lived for a year and a half when I was eight or nine years old.

One is the flowers of the sweet olive tree.  Sweet olive is a small tree with glossy leaves and little, cream-colored flowers with a fruity, spicy smell a little reminiscent of a combination of fresh peaches and vanilla.  My grandma had a beautiful sweet olive, and when it flowered in early summer, it perfumed the entire yard.

The other is the smell of old books.  When I lived with my grandma my bedroom was in the attic, a maze-like twist of rooms and alcoves with sloped ceilings, a wooden floor, and shelves laden with what seemed to my young eyes like thousands of books.  That dusty, dry smell when you turn the cover of a book that hasn't been opened in decades immediately brings me back to that happy time that was, in a lot of ways, like an oasis of calm and happiness in an otherwise troubled and turbulent childhood. 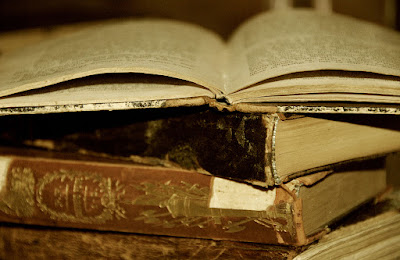 I suspect a lot of you can relate to my experience of having scents trigger memories, but it's hardly a new observation.  This phenomenon was the impetus for Marcel Proust's Remembrance of Things Past, in which the entire book begins with the protagonist having a memory triggered by the smell and taste of madeleine cake and tea.  What's been less obvious is why smell has such a strong link to memory -- for many people, stronger than any of the other senses.

Two recent papers, one in the journal Cell and the other in Nature, have elucidated why that might be.  One reason is that the sense of smell is so specific -- we have over four hundred different types of olfactory sensors, each responsive to different molecules, and those sensors are connected through the olfactory bulb of the brain directly to the hippocampus (a major memory center) and the parts of the cerebral cortex involved in storage of memories.

There's a lot we still don't understand, however.  In part, our responsiveness to scents seems to have an epigenetic component -- the phenomenon wherein traits can be inheritable without involving alterations in the DNA.  For example, the grandchildren of mice who were given mild electric shocks when exposed to the scent of cherry blossoms have an aversive reaction to the odor even though they were never shocked themselves.  (This may sound like a Lamarckian "inheritance of acquired characteristics" model, and in a way, it is; but epigenetic effects usually happen because the trait involved hormonal alteration of the rate of gene expression, which can affect the children -- and grandchildren -- without the actual DNA being changed.)

What it immediately made me wonder is how this affects the experience of animals with way more sensitive noses -- like dogs.  Dogs' big snouts have fifty times more olfactory receptors than our puny little noses do. 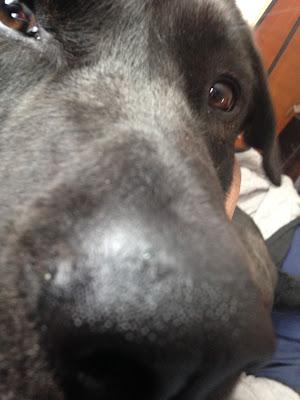 Not only that, a dog's olfactory processing center is forty times bigger relative to the rest of its brain than yours is.  So how does that affect what neuroscientist David Eagleman calls its umwelt -- the sensory world it inhabits?  Imagine if the olfactory landscape you were immersed in every time you took a breath was as vivid as the visual and auditory landscapes most of us experience without even thinking about it.

No wonder my dogs both sniff me thoroughly whenever I come home after being away.  Who knows what information they're gleaning about where I've been, who I've come into contact, and *gasp* what other dogs I may have said hi to along the way?

We're just beginning to parse how our sensory processing centers integrate with the other parts of the brain, and solve the old question of why (and how) the olfactory sense is such a powerful trigger to sometimes long-buried memories.  Scientists are even considering the possible use of scents as a way to decondition traumatic memories in PTSD sufferers -- if there are smells with positive, reassuring connections, being exposed to those while suffering from the resurgence of trauma might blunt the edge of the pain.  In one study, smelling an odor with pleasant associations (in this case, fresh coffee) while recounting a memory of a traumatic experience significantly lowered the emotional distress of the test subjects.

It will be fascinating to see where this research goes, as we untangle layer after layer of the complex network that allows us to perceive our world and recall what we experience.  And, perhaps, explain how after fifty years, there's still a link in my brain between sweet olive flowers, old books, and my grandma's face.