Anatomy of a verbal slap

A few weeks ago, a buddy and I were out for a walk on one of the local woodland trails.  It's a popular trail with bikers, runners, and hikers, running about fifteen kilometers down to Cass Park in the city of Ithaca.  To set the scene -- it's a well-maintained, broad path, and where we were was one of the widest parts of the trail, maybe three or four meters across or so, level and flat, with no obstructions of any kind, and a mown grassy shoulder on either side.
We were walking along chatting, and I heard a noise behind us.  I turned, and two runners were approaching, so we got off the trail to let them by.  Because of where we were, it was fastest to get out of the way if he stepped off to the left and I stepped off to the right; which we did, giving the two runners the entire path to themselves.  They didn't even have to slow down their pace.  But as they passed, one of them half-turned and snapped out some words to us, which I didn't catch.
I said, "I'm sorry, what?"
She gave a harsh sigh, turned around, and snarled, "It's rude to split the trail!  Learn some etiquette!"  And without waiting for a response, she and her friend took off at a run again.
I was speechless, for several reasons.  First of all, I've been a runner for forty years, and I've never heard anyone talk about "splitting the trail."  I didn't even know that was a thing.  As far as I've ever heard, unless there's a race going on, there's no particular etiquette about sharing a trail except for "get out of the way as quickly as you can and let the faster person pass."  The trail in question is heavily used, especially on nice days, and most everyone has no problem dealing with minor slowdowns and very infrequent traffic jams when several people end up at the same place at the same time.
But the gaffe that my friend and I committed -- which, allow me to reiterate, hadn't even required the two runners to slow down -- was apparently serious enough that we were accused of being "rude" and "lacking in etiquette."
What's oddest about all of this is my reaction to it.  You'd think I'd have gone through all the rational responses I just outlined, and would have immediately dismissed what she said as completely unreasonable.  Less charitable but perhaps still justifiable would have been laughing and saying, "What an asshole!" and forthwith forgetting about the incident entirely.  But in fact, it kind of ruined my morning.  I know I can be a bit of a golden retriever at times -- I have a tendency to want to be everyone's friend, sometimes at the expense of standing my ground even when I should -- but this seemed to go beyond even my usual desire not to ruffle feathers.
This ten-second interaction with a woman I had never seen before and haven't seen since left me feeling like I'd been slapped in the face.
It turns out I'm not alone.  We all react that way -- in fact, in some new research by a team led by Marijn Struiksma of Utrecht University, we find out that the response is so strong that it still occurs even when the insult is carried out under completely contrived, artificial circumstances.
What Struiksma and her team did was to hook up 79 volunteers to an electroencephalogram (EEG) machine, which measures scalp conductance (and thus is a measure of the electrical activity of the brain).  They were then presented with various written statements, some of which used the participant's name and some of which used a different name.  Some were insults (e.g. "Linda is a horrible person"), some were positive (e.g. "Linda is an impressive person"), and some were neutral but factually correct (e.g. "Linda is Dutch").  And what the researchers found is that the volunteers had a strong emotional reaction to the personally-directed insults -- even knowing ahead of time that it was just an experiment, and those statements were not the honest opinion of any real person.
"Our study shows that in a psycholinguistic laboratory experiment without real interaction between speakers, insults deliver lexical ‘mini slaps in the face,’ such that the strongly negative evaluative words involved that a participant reads, automatically grab attention during lexical retrieval, regardless of how often that retrieval occurs," Struiksma said.  "Understanding what an insulting expression does to people as it unfolds, and why, is of considerable importance to psycholinguists interested in how language moves people, but also to others who wish to understand the details of social behavior."
If a contrived "insult," delivered in writing to a person who knew it was just part of a psychology experiment, can create a measurable neurological reaction, how much more are we affected by nasty comments in real-life situations -- even passing ones from total strangers, like the woman who accused me of being rude on the trail because I didn't get out of her way in the fashion she required?  It all brings home how important it is simply to be kind to each other.  Yeah, maybe I should grow a thicker skin; I'll admit that I can be pretty hyper-sensitive sometimes.  But honestly, what does it cost anyone to start from the assumption that most of us are doing the best we can?  You never really lose anything by cutting people some slack.
I'll end with a quote from the Twelfth Doctor from Doctor Who.  Twelve is not my favorite incarnation of the Doctor, but man, Peter Capaldi can deliver a monologue like no one else.  And this one -- about how even in extreme situations, the most important thing is the simplest of all -- seems like a good place to conclude this post. 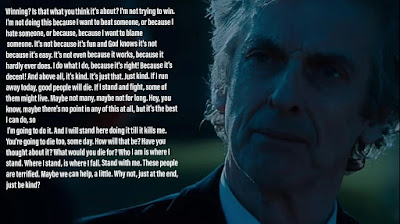