You might have seen the most recent lunatic pronouncement coming from the Christofascist right wing here in the United States, this time from noted wingnut Representative Lauren Boebert of Colorado.  Boebert appeared on the show Flash Point, and in response to a question about what we should do to improve our country, she said, "Maybe we need to have some sort of legislation that requires Constitution Alive! and biblical citizenship training in our schools, and that's how we get things turned around."

It hardly bears pointing out that Constitution Alive! is a Christian ultra-nationalist approach to interpreting the Constitution, and says right on its website that its goal is "restoring America's Biblical and Constitutional foundations of freedom." 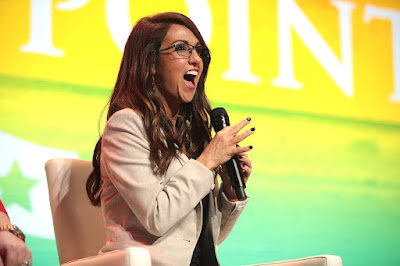 I'm more interested, though, in Boebert's "biblical citizenship" test idea.  So in the interest of seeing if she's qualified herself, I submit a short quiz I put together to test her understanding of the Bible (along with biblical references, in case you want to check my sources).  See how you score, Representative Boebert.

1. Which of the following should be sufficient to prohibit you from entering a church?

a) Having a flat nose.

b) Having a broken hand.

d) All of the above.

2. A guy and his wife are walking home one evening, and he's attacked by a guy with a knife.  It looks like the attacker's going to kill him, but his wife saves the day by grabbing the attacker by the nuts and giving a good squeeze.  What should he do to reward her for her valor?

a) Give her a great big kiss.

c) Tell all his friends about how brave his wife is.

d) Cut off her hand.

Answer: (d).  Deuteronomy 25:11-12.  "When men strive together one with another, and the wife of the one draweth near for to deliver her husband out of the hand of him that smiteth him, and putteth forth her hand, and taketh him by the secrets: Then thou shalt cut off her hand, thine eye shall not pity her."

3.  Some people move in next door.  They seem nice, but upon inquiry, you find out that they aren't Christians.  What is the appropriate response?

a) Treat them with kindness and compassion, because that's what the Bible says to do.

b) Try to convert them to Christianity.

c) Stone them to death.

Answer: (c).  Deuteronomy 17:2-5.  "If there be found among you, within any of thy gates which the Lord thy God giveth thee, man or woman, that hath wrought wickedness in the sight of the Lord thy God, in transgressing his covenant, and hath gone and served other gods, and worshipped them, either the sun, or moon, or any of the host of heaven, which I have not commanded; and it be told thee, and thou hast heard of it, and enquired diligently, and, behold, it be true, and the thing certain, that such abomination is wrought in Israel: Then shalt thou bring forth that man or that woman, which have committed that wicked thing, unto thy gates, even that man or that woman, and shalt stone them with stones, till they die."

4.  Well, suppose there's an entire town where people aren't Christian.  What should you do about them?

a) Let them be -- as long as they're not hurting anyone, they have the right to believe what they want.

b) Try to convert them to Christianity.

c) Kill them all.

Answer: (c). Deuteronomy 13:12-14.  "If thou shalt hear say in one of thy cities, which the Lord thy God hath given thee to dwell there, saying, Certain men... are gone out from among you, and have withdrawn the inhabitants of their city, saying, Let us go and serve other gods, which ye have not known; Then shalt thou enquire, and make search, and ask diligently; and, behold, if it be truth, and the thing certain, that such abomination is wrought among you; Thou shalt surely smite the inhabitants of that city with the edge of the sword, destroying it utterly."

5.  Okay, we killed all the people in the non-Christian town.  What should we do about their cattle?

a) What kind of stupid fucking question is this?  Why should you do anything about the cattle?

b) Kill them all.

Answer: (b).  Deuteronomy 13:15 goes on to say, "Destroy all that is therein, and the cattle thereof, with the edge of the sword."

6.  You ask your kid to load the dishwasher, and he rolls his eyes and tells you to go to hell.  What should you do?

b) Withhold his allowance for the week.

c) Stone him to death.

7.  Someone treats you badly.  How should you respond?

b) Turn the other cheek and let him hit that one, too.

c) Laugh as you're smashing his children on a big rock.

d) All of the above.

8.  What should the punishment be for kids who make fun of a priest's bald head?

a) Nothing.  Ignore it.  Kids do that sort of stuff sometimes.

b) Tell their parents and let them deal with it.

c) Get some vicious bears to eat the children.

d) Stone them to death.

Answer: (c).  Ha!  I bet you thought it was (d), but no.  2 Kings 2:23-24.  "And he [the prophet Elisha] went up from thence unto Bethel: and as he was going up by the way, there came forth little children out of the city, and mocked him, and said unto him, Go up, thou bald head; go up, thou bald head.  And he turned back, and looked on them, and cursed them in the name of the Lord.  And there came forth two she-bears out of the wood, and tare [ripped apart] forty and two children of them."

9.  As a good Christian American, can I own slaves?

a) What?  Are you kidding?  Owning slaves is inherently immoral!  I don't care what your religion is!

b) Yes, as long as they're Canadian.

10.  How much authority does Lauren Boebert have to talk about the Bible, religion, and such matters?

a) Zero, because she has the IQ of a Pop-Tart.

b) Zero, because someone as clearly sociopathic as she is has no standing to preach morality and ethics to anyone.