The human brain, as astronomer Neil deGrasse Tyson put it, is "rife with ways of getting it wrong."  He's not only talking about the unfortunate penchant some people have for perpetrating hoaxes; it's just that our preconceived notions, the selective filters on what we see and hear, and (let's face it) our ignorance about natural phenomena make it all too easy to misinterpret what we're seeing and hearing.  Dr. Tyson relates a particularly amusing example, a policeman out at night who gave chase on a mountain road to a UFO -- a bright light, he said, that was ahead of him near the horizon, and kept bobbing around, easily staying in the lead as he swerved back and forth around the curves.

Turns out what he was chasing was the planet Venus, and the bobbing motion was his brain's inability to sort out the fact that it was in a moving car traveling on a winding road.

Not all examples of oddball eyewitness testimony are that easily explained, however.  Take, for example, the reports that have come in for (literally) centuries from sailors out in the open ocean, of times that the seas suddenly take on an opaque, opalescent glow -- the so-called "milky seas" phenomenon.

It's not the same as ordinary bioluminescence, a sparkling and flashing of living organisms that are capable of producing light.  A well-known example is the dinoflagellate Noctiluca scintillans, which produces the blue glow sometimes seen in shallow tropical waters.  Bioluminescence, however -- at least the kind we know about -- is transitory, lasting for minutes, and even when it's due to microorganisms only affects a small area.

The "milky seas" phenomenon, however, lasts for hours, and there are accounts of ships traveling for a hundred miles through water that looks like "a plain covered with snow."  And unlike typical bioluminescence, whatever causes milky seas is suppressed by agitation -- the eyewitness accounts report that the bow wave of the ship is darker than the surrounding water.

The phenomenon has proven elusive, though.  First of all, whatever it is, it's rare; there are only a couple of reports a year.  This makes it hard to study, and also makes it tempting to attribute it to overactive imagination, or simple misreporting of something completely ordinary like the reflection of moonlight (a bit like our unfortunate Venus-chasing policeman).

But now, a paper this week in Proceedings of the National Academy of Sciences has shown conclusive evidence that it exists -- not only photographs and reports from a ship sailing near Java, but satellite images of the event taken on the same night. 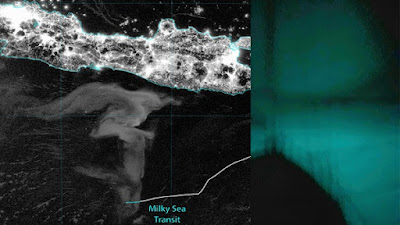 On the left, the satellite image of the milky seas event; the brightly-lit strip in the top half of the photo is the island of Java.  On the right, a photograph taken by the crew of the Ganesha.

Explaining what's causing the phenomenon, however, is still not simple.  One theory is that it's being caused by a bloom of a so-far-unidentified species of bioluminescent bacteria, based on a single water sample from a milky seas event in the Arabian Sea in 1985.

But at least now we have hard evidence that it's something real.  "The biggest missing link in our study from last year was the lack of ground truth," said study lead author Steven Miller, of Colorado State University, who has been chasing this phenomenon for years.  "But this current study provides it.  It was a great relief to get this contact from the Ganesha crew."

It's fascinating how little we know about the oceans -- I've heard it said that we know more about the surface of the Moon than we do about the open ocean and seafloor, and I believe it.  But it looks like one of the ocean's mysteries has at least shown itself for sure.  We still don't have a certain explanation for it, but at least now we know the phenomenon is real.

So figuring out what's going on when the seas at night turn to milk is only a matter of time.