The evolution of the anti-evolutionists

Dear readers:
I am going to take a long-overdue two-week break from writing here at Skeptophilia, so this will be my last post until Thursday, August 25.  Until I return, keep suggesting topics, keep reading, keep thinking, and keep hoisting the banner of critical thinking!
cheers,
Gordon
*********************************
Sometimes I see a piece of scientific research that is so brilliant, so elegant, all I can do is sit back in awestruck appreciation.

Such was my reaction to Nicholas J. Matzke's paper in Science entitled, "The Evolution of Antievolution Policies after Kitzmiller v. Dover."  And if you're wondering... yes, he did what it sounds like.

He used the techniques of evolutionary biology to show how anti-evolution policy has undergone descent with modification.

I read the paper with a delighted, and somewhat bemused, grin, blown away not only by how well it worked, but how incredibly clever the idea was.  What Matzke did was to analyze the text of all of the dozens of bills proposed since 2004 that try to shoehorn religious belief into the public school science classroom, and generate a phylogenetic tree for them -- in essence, a diagram summarizing how they are related to each other, and how they have changed.

In other words, a cladistic tree of evolutionary descent.

"Creationism is getting stealthier in the wake of legal defeats, but techniques from the study of evolution reveal how creationist legislation is evolving," Matzke said in an interview.  "It is one thing to say that two bills have some resemblances, and another thing to say that bill X was copied from bill Y with greater than ninety percent probability.  I do think this research strengthens the case that all of these bills are of a piece—they are all ‘stealth creationism,’ and they all have either clear fundamentalist motivations, or are close copies of bills with such motivations."

"They are not terribly intelligently designed," Matzke added. "Some of the bills don’t make sense, they’ve been copied from another state and changed without thought."

He linked the bills to each other by doing statistical analysis of patterns in the text, much as evolutionary biologists use patterns in the DNA of related organisms, and arranged them into a cladistic tree using the "principle of maximum parsimony," which (simply put) is the arrangement that requires you to make the fewest ad hoc assumptions.

So without further ado, here is Matzke's tree linking 65 different, but related, pieces of legislation: 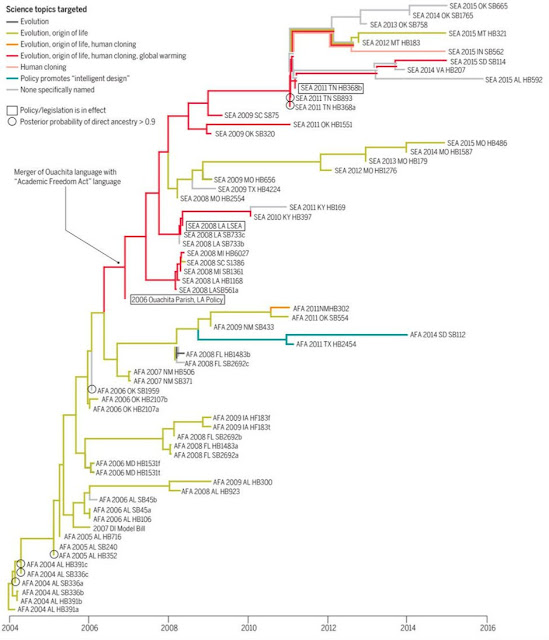 In particular, he was able to show where the documents incorporated language from a 2006 anti-evolution proposal in Ouachita Parish, Louisiana, and how subsequent generations had pieces of it remaining, often -- dare I say -- mutated, but still recognizable.

"Successful policies have a tendency to spread," Matzke said.  "Every year, some states propose these policies, and often they are only barely defeated.  And obviously, sometimes they pass, so hopefully this article will help raise awareness of the dangers of the ongoing situation."

So when there are iterations that are better fit to the environment, in the sense that they went further in the court systems before being defeated or (hard though this is to fathom) were actually approved, the anti-evolutionists passed those versions around to other states, while less-successful models were outcompeted and become extinct.

There's a name for that process, isn't there?  Give me a moment, I'm sure it'll come to me.

Okay, it's not that I think this paper will make much difference amongst the creationists and supporters of intelligent design.  They don't spend much time reading Science, I wouldn't suppose.  But even so, this is a coup -- using the techniques of cladistic analysis to illustrate the relationships between bills designed to force public school students to learn that cladistic analysis doesn't work.