An apocalypse to remember

Hi!  Hope you're having a lovely day so far.  Enjoy what you can of it, because we're all gonna die today.

At least that's the contention of the Usual Suspects on the interwebz.  The whole thing started ten days ago, when a German politician named Friedrich Metz was giving a speech, and said, "Dear colleagues…September 24, 2022 will be remembered by all of us as a day which we will say, 'I remember exactly where I was…'"

Then (depending on who you believe) either the mic cut out or else he just refused to elaborate further.  Of course, this immediately caused multiple orgasms amongst the conspiracy theory types, who took Metz's statement and crafted it into what was basically a Mad Libs for wingnuts, of the form "[Choose one from column A] stopped Metz from talking because they don't want people finding out that [Choose one from column B] is going to happen."

As always, they're basing their conclusions (if I can even dignify them with that word) on evidence so slim that to call it wafer-thin would be an insult to wafer-makers.  One guy said one semi-alarmist thing, and all of a sudden, it's the end of the world. 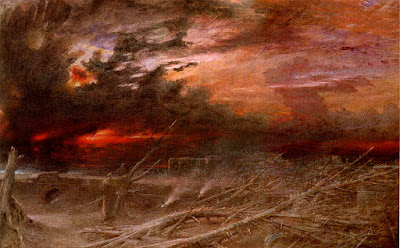 Apocalypse by Albert Goodwin (1903) [Image is in the Public Domain]
It also conveniently ignores the fact that these wacko catastrophists have an exactly zero batting average.  There have been so many predictions of apocalyptic events that Wikipedia even has a page keeping track of them, headed by the wonderful phrase, "This is a dynamic list and may never be able to satisfy particular standards for completeness."
So the apocalyptoids keep saying, "No, really!  It's really gonna happen this time, we promise!", and nothing continues to happen except the world kind of limping along the way it always has.  But who knows?  Maybe this time we'll finally, at long last, have a winner.  September 24, 2022, will be the day we'll all remember, except for those of us who died in the supervolcano eruption or megacyclone or whatnot.
At this point, I'm frankly rooting for the apocalypse.  I live in a part of the world so quiet that watching the farmer across the road running his hay baler is considered high entertainment.  I'd rather not be vaporized by a meteor strike, but honestly, some of the others sound at least like welcome reprieves from boredom.  Alien invasion?  Solar flares?  Hell, bring 'em on.  I'm ready.
Illuminati, do your worst.  And that goes double for you gray aliens from Zeta Reticuli.
****************************************