New from the "Well, I Coulda Told You That" department, we have: a study out of MIT showing that confident kids do better in mathematics -- and that confidence instilled in childhood persists into adulthood, with positive outcomes in higher education, employment, and income.

The study appeared in the Journal of Human Resources, and tracked children from eighth grade onward.  It looked at measures of their confidence in their own knowledge and ability, correlated those assessments against their performance in math, and then studied their paths later on in education and eventual employment.  Controlled for a variety of factors, confidence was the best predictor of success.

What's interesting is that their confidence didn't even have to be that accurate to generate positive outcomes.  Overconfident kids had a much better track record than kids who were underconfident by the same amount.  Put a different way, it's better to think you're pretty good at something that you're not than to think you're pretty bad at something that you're not.

I can speak to this from my own experience.  I've had confidence issues all my life, largely stemming from a naturally risk-averse personality together with a mom who (for reasons I am yet to understand) discouraged me from trying things over and over.  I wanted to try martial arts as a teenager; her comment was "you'd quit after three weeks."  I had natural talent at music -- one of the talents I can truly say I was born with -- and asked to take piano lessons.  My mom said, "Why put all that money and time into something for no practical reason?"  I loved (and love) plants and the outdoors, and wanted to apply for a job at a local nursery run by some friends of my dad's.  She said, "That's way more hard, heavy, sweaty work than you'll want to do."

So in the end I did none of those things, at least not until (a lot) later in life.

A great deal of attention has been given to "helicopter parents," who monitor their kids' every move, and heaven knows as a teacher I saw enough of that, as well.  I remember one parent in particular who, if I entered a low grade into my online gradebook (which the parents had access to), I could almost set a timer for how long it'd take me to get an email asking why he'd gotten a low score.  (It usually was under thirty minutes.)  To me, this is just another way of telling kids you have no confidence in them.  It says -- perhaps not as explicitly as my mom did, but says it just the same -- "I don't think you can do this on my own.  Here, let me hold your hand."

Humans are social primates, and we are really sensitive to what others think and say.  Coincidentally, just yesterday I saw the following post, about encouragement in the realm of writing: 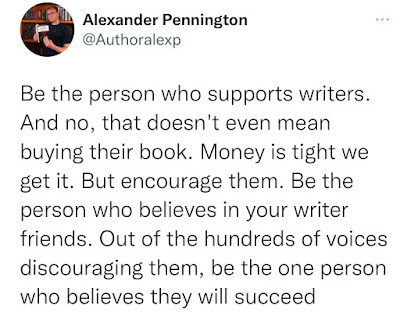 Now, let me put out there that this doesn't mean telling people that bad work is good or that incorrect answers are correct.  It is most definitely not the "Everyone Gets A Prize" mentality.  What it amounts to is giving people feedback that encourages, not destroys.  It's saying that anyone can succeed -- while being honest that success might entail a great deal more hard work for some than for others.  And for the person him/herself, it's not saying "I'm better than all of you" -- it's saying, "I know I've got what it takes to achieve my dreams."

Confidence is empowering, energizing, and sexy.  And I say that as someone who is still hesitant, overcautious, self-effacing, and plagued with doubt.  I all too often go into an endeavor -- starting a new book, entering a race, trying a new style of sculpture -- and immediately my mind goes into overdrive with self-sabotage.  "This'll be the time I fail completely.  Probably better not to try."

So it's a work in progress.  But let's all commit to helping each other, okay?  Support your friends and family in achieving what they're passionate about.  Find ways to help them succeed -- not only honest feedback, but simply boosting their confidence in themselves, that whatever difficulties they're currently facing, they can overcome them.

After all, isn't it more enjoyable to say "see, I toldja so" to someone when they succeed brilliantly than when they fail?