One of the reasons science is so useful is that our intuition about how things work is so often wrong.

A good example is the classic physics thought-experiment about taking two bullets -- one loaded in a gun that has the barrel perfectly horizontal, the other one held in your hand at the same height.  You fire the gun over level ground, and simultaneously let go of the bullet.  Which hits the ground first?

It seems like they should take different amounts of time; the one shot from the gun is traveling much farther, for one thing.  Most people think because of that, the dropped bullet would hit the ground first.  In fact, you undoubtedly know that (omitting the effects of air resistance or uneven terrain), the two bullets hit the ground at precisely the same time; Isaac Newton showed that the horizontal and vertical components of velocity are completely independent of one another.  It doesn't matter that the shot bullet is traveling rapidly in the horizontal direction; it and the dropped bullet have exactly the same vertical acceleration, namely 9.8 meters per second per second downward, starting from rest.  Thus they take exactly the same amount of time to hit the ground.

I was reminded of another example of this by some cool new research (which I will get to presently) I ran across yesterday.  It has to do with geology, namely, what the crust and mantle of the Earth are like.  It seems common-sensical that the surface of the Earth is uniformly cool and rocky, and the interior (judging by volcanoes) is molten; and while that isn't wrong in a broad-brush sort of way, what it misses is that there's a big difference between the rocks currently under your feet and the rocks at the bottom of the deep ocean.  Continental crust is thick, and extends both upwards into the air and downward into the mantle, a little like an iceberg; the rocks that make up the continents are, on the whole, lighter than oceanic crust, which is thin, brittle, and dense.  So the continents are literally floating in the liquid rock of the upper mantle.

This, of course, is what gives rise to plate tectonics; those iceberg-like blobs of floating rock we call continents, and the thin, heavy slabs of deep oceanic crust, jostle around on the magma of the upper mantle, colliding, pulling apart, shifting, and subducting (one piece going underneath another), and that gives rise to most of the geologic processes you've heard about.

But here's where we run into a fascinating question; why is the chemistry of continental rock (and thus its density) so different than oceanic rock? 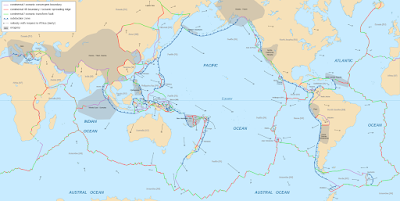 A piece of research out of Curtin University (Australia), published this week in Geology, suggests a surprising answer: the material that makes up the cratons -- the large, stable blocks of rock that form the nuclei of continents -- is extraterrestrial in origin.

Chris Kirkland, lead author of the study, was looking at the age of rocks in cratons around the world, and found something curious; their production seemed to occur at (roughly) two hundred million year intervals.  The formation of these blocks of rock coincide with the points at which the Solar System was passing through an area of dense stars in the spiral arm of the Milky Way as it orbited the Galactic Center.

"From looking at the age and isotopic signature of minerals from both the Pilbara Craton in Western Australia and North Atlantic Craton in Greenland, we see a similar rhythm of crust production, which coincides with periods during which the Solar System journeyed through areas of the galaxy most heavily populated by stars," Kirkland said.  "When passing through regions of higher star density, comets would have been dislodged from the most distant reaches of the Solar System, some of which impacted Earth.  Increased comet impact on Earth would have led to greater melting of the Earth’s surface to produce the buoyant nuclei of the early continents... Linking the formation of continents, the landmasses on which we all live and where we find the majority of our mineral resources, to the passage of the Solar System through the Milky Way casts a whole new light on the formative history of our planet and its place in the cosmos."
Of course, we've known for a while that all of the rock on Earth ultimately came from the coalescence of asteroids as the Solar System formed; but it's weird to think that the rock we're currently sitting atop may have been thrown at us by the near passage of other stars to our Sun as the entire Solar System hurtled its way around its host galaxy.  Whether Kirkland's claim will bear out under scrutiny, I don't know; but what's certain is that the methods of science has opened our eyes to a myriad processes that would have been entirely opaque to our so-called common sense.  Yes, scientists do get it wrong sometimes; they're fallible, and can misinterpret data or get hung up on their biases just like anyone.  But only science provides a protocol for catching and fixing those mistakes.
So it may not be perfect -- but for getting near to the truth, science really is the only game in town.
****************************************