Those of you who are interested in the affairs of the royal family of Great Britain will no doubt want to know that the psychics have weighed in on the future of newly-crowned King Charles III.

According to an article Thursday in the Hull Daily Mail, the loyal subjects of His Majesty are in for a bit of a rollercoaster.  One Mario Reading, author and expert in interpreting the writings of Nostradamus, predicts that Charles III isn't going to be king for long.  He's going to abdicate, Reading says.  "Prince Charles will be 74 years old in 2022, when he takes over the throne.  But the resentments held against him by a certain proportion of the British population, following his divorce from Diana, Princess of Wales, still persist."

After that, things get even weirder.  Citing Nostradamus's line "A man will replace him who never expected to be king," Reading says that after Charles's abdication, the next king will not be his elder son William.  It could be that his younger son, Prince Harry, will reign as King Henry IX... or possibly someone even wilder.  An Australian guy named Simon Dorante-Day, who claims he is the secret son of King Charles and the Queen Consort Camilla, might be ready to take the crown once Charles steps aside.

"It’s certainly food for thought, because the prediction makes it clear that someone out of left field would replace Charles as king," Dorante-Day said.  "I can see why some people would think I fit the bill.  I believe I am the son of Charles and Camilla and I’m looking forward to my day in court to prove this.  Maybe Nostradamus has the same understanding that I do, that all this will come out one day." 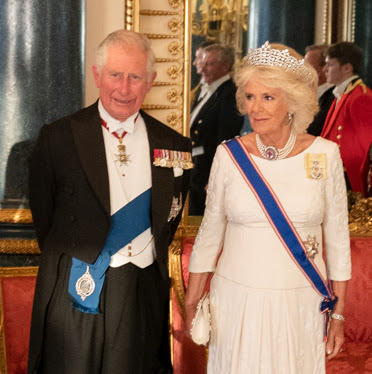 King Charles III and the Queen Consort Camilla [Image is in the Public Domain]
On the other hand, an article Thursday in the Hull Daily Mail says that the new king has nothing to worry about.  Psychic and Tarot card reader Inbaal Honigman says she did a card layout for King Charles, and found that he will have a long and fruitful reign.
"Starting off, he has the Three of Swords card which is for sorrow," Honigman said.  "This means he is entering a period of mourning and adjustments that will be quite hard for him...  He’s not a young person taking on this role so he will have added worries and concerns about himself and his entire family so I predict this will be a time of introspection for him while he adapts to the transition.  The next card is a Ten of Cups which is a water Tarot and as King Charles is a water sign, he is very aligned to this card.  This card shows that he is possibly preparing or will make preparations early on for the next transition that will occur after him."
Honigman said overall, the predictions were encouraging.  "The third card is the Chariot card, which is a card of moving on.  I predict that around his eightieth birthday, King Charles is going to start sharing duties with his son, Prince William, to ensure there is a smooth transition of power when the time eventually comes for Charles.  The Chariot card is not negative, it means the moving on will be from a safe and secure place and that King Charles and Prince William will work well together.  I think the public will get behind Charles as the King.  I think his words and actions in the next days and weeks will demonstrate his message is one of love, unity and public service and that he intends to do all of it from the heart."
So yeah.  If you were reading carefully and noted the sources of these two predictions, you noticed something interesting.  Two psychics made completely opposite predictions about the same person, and the stories appeared in the same newspaper on the same day.
Believers in psychic phenomena often get snippy with us skeptics about our tendency to dismiss divination and future-reading out of hand, and yet don't have any inclination to call out such obvious impossibilities as this one.  Instead, they pick out the one or two times someone gets something right -- for instance, the aforementioned Mario Reading correctly predicted Queen Elizabeth II would die this year -- and claim this is vindication for the whole shebang, rather than (1) listing all the times the psychics got things wrong, (2) pointing out when psychics say mutually contradictory things about the same person or event, and (3) acknowledging the fact that predicting the death of a frail 96-year-old lady really isn't much of a reach even if you're not psychic.
So come on, psychics.  Get your act together.  If there really is something to what you're claiming, there ought to be at least some consistency between your predictions.  Okay, I can let it slide if you get the occasional details askew.  But "Charles will abdicate soon and be replaced either by Prince Harry or by some random dude from Australia" and "Charles will have a long reign and there will be a smooth transition of power to his elder son, Prince William" can't both be true.
It puts me in mind of the famous quote from the Roman author Cicero: "I wonder how two soothsayers can look one another in the face without laughing."
****************************************