Look me in the eye

It's fascinating how much information can transfer between two humans solely through eye contact.
I say that as a person who has a serious issue with doing this at all.  I have no idea where my avoidant behavior comes from, although I do recall hearing "Look at me when I'm talking to you!" a lot as a kid when I was in trouble.  But I find making sustained eye contact dreadfully uncomfortable.  I recall vividly being in a men's workshop a while back where one of the exercises was standing, a foot or so apart, face-to-face with another man, and simply holding each other's gazes for three minutes.  Those three minutes seemed to drag on forever, and it required phenomenal willpower on my part not to look away. 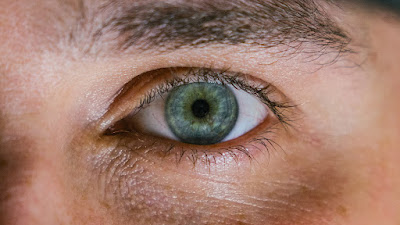 [Image is in the Public Domain]
Perhaps part of it is my intense dislike of being the focus of attention, another outcome of my rather unfortunate childhood.  Interestingly, this tendency never bothered me much while I was teaching; to me, a teacher isn't (or shouldn't be) saying "Hey, look at me!", (s)he is saying about the topic being studied, "Hey, let's look at this other thing together, isn't this cool?"
I've wondered, though, if my tendency to look away when people glance at me has influenced my ability to form relationships.  I can see how this might make me seem aloof or unfriendly.  It's certainly contributed to a regrettable inability on my part to be able to tell when someone is flirting with me.  My friends, knowing my general cluelessness, have been known to say, "Um... you do realize (s)he was flirting with you, right?"  The answer almost always is "no."  The sad truth is that I wouldn't know if someone was flirting with me unless they were holding up a sign that said, "HEY.  STUPID.  I AM CURRENTLY FLIRTING WITH YOU."
And given the fact that I would probably be looking away the whole time, even that might not help.
The reason all this squirm-inducing stuff comes up is because of a study out of the University of Würzburg published this week in the Journal of Experimental Psychology, entitled, "Don't Look At Me Like That: Integration of Gaze Direction and Facial Expression," in which we find out that for most people, whether or not we have a desire to meet someone's eyes depends strongly on what their facial expression is.
The researchers, led by Christina Breil, used photos of individuals who were either looking toward or away from the viewer, and had one of four emotional expressions: joy, anger, disgust, and fear.  The team measured how quickly volunteers looked into the eyes of the person in the photograph, and how long that (virtual) eye contact was maintained.  What they found was that we tend to look more quickly into the eyes of people expressing joy or anger (and hold the gaze longer), and be reluctant to look at those expressing disgust or fear.  In fact, the disgust and fear photos attracted more attention when the person in the photo was looking away from the viewer.
The anger results interested me the most, because I get really uncomfortable (even more uncomfortable than normal, which is saying something) around angry people.  I'm a champion conflict-avoider, which probably won't come as any real shock.  Breil et al. explain that this is thought to occur because anger, while generally considered unpleasant, is still an "approach-oriented" emotion; note that we even call angry confrontations "getting in your face."  Disgust and fear, on the other hand, are "avoidance-oriented;" they make us want to retreat from whatever it was that elicited the response.
I wonder how someone with a generally avoidant orientation, like myself, would have done with this experiment.  I certainly don't have nearly the problem looking at a photograph that I do looking into the eyes of a real person.  But if I hadn't known what the gist of the experiment was beforehand (which the volunteers, of course, didn't), it'd have been interesting to see how I'd have reacted.
The eyes, they say, are the window to the soul.  Certainly we express a great deal of feeling with them.  And how we respond to those expressions seems to be pretty nearly universal -- illustrating that once again, for social animals, effective communication is a strong driver for evolution.
****************************************